On the 19th of April, WWE aired the 244th episode of NXT, taped at Full Sail University in Winter Park, Florida on 5th April. After last week's big farewell to Shinsuke Nakamura, this week we would have the last NXT match of Tye Dillinger as he'd attempt to settle the score with Eric Young (if Tye wins, that would put him at 1 win to Young's 5. Settled.) in a Steel Cage match. The Steel Cage match is of course a staple of faces trying to avoid outside interference because it always works! The show also featured NXT Champion Bobby Roode, Andrade 'Cien' Almas, The Iconic Duo of Peyton Royce & Billie Kay and a big return, could it continue with last week's solid effort and produce another fun show? Let's find out...


Itami knocked Roode out cold with the GTS 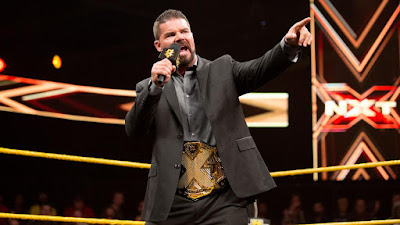 You may have noted my 'hmmm' about the placement of Hideo Itami last week at the goodbye ceremony for Nakamura, turns out 'hmmm' was correct. Roode would come out, suited and indeed booted to start the show by telling everyone how glorious he was, how he's improving NXT, how he didn't come out to say farewell to Nakamura because he beat him, twice, all lot's of decent 'heat', he even gets some boos from the normally Roode-loving Full Sail crowds. Of course while he was running his mouth, out would come everyone's favourite delayed push due to injury, Hideo Itami, managing to outsuit Bobby Roode but was wearing Plimsolls so Roode maybe still has him there. He would deliver a crisp slap, worthy of a dueling challenge to the face of the NXT champ and then a GTS much to the constant delight of the crowd before looking at the title and walking away. All good things here and putting Itami back in the ring with someone like Roode is a good plan as most of his injuries seem to have been sustained via rookie mistakes so a more seasoned performer like Roode should be able to work around such things. 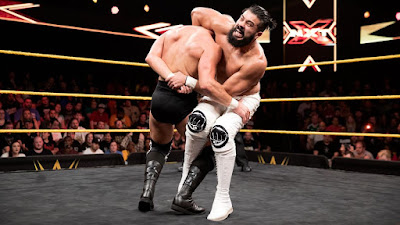 Almas, his entrance and his fucking hat make so much more sense as he's fully embracing his heel role, Danny Burch entered to something approaching a pop. They worked a short, but quite painful looking match with lots of strikes, reversals and quite a lot of attention paid to the arm early on that did not pay off. Burch would quickly fall to a Big Boot into the corner crotch wipe, I mean Double Knees into the Hammerlock DDT. Another week, another match that is the defintion of Squash match but in that the 'official' term for Burch right now is 'Enhancement Talent', he certainly did make Almas good.
Morgan & Aaliyah def. Royce & Kay 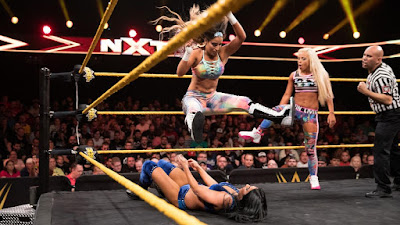 Morgan and Kay started proceedings, working a slow, feeling-out process. IN fact, most of the match could be described as slow as nothing really happened and none of it was done very quickly beyond Morgan using her legs to roll Kay around the mat. Aliyah worked the 'Canadian who likes cats but isn't Natalya' in-peril role well till Morgan would come in hit a dropkick on Kay who was doing stuff and Aliyah would small package Royce for the pin. An oddly brief match, it seemed planned but at the same time, it seemed like the match was only getting started then it was over. It wasn't the worst. 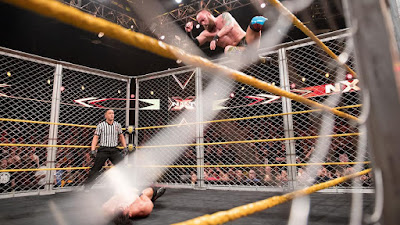 Turns out, this match had a shit-ton of run-ins. Young did the 'I'm not getting in just yet' bit until Tye attacks and pulls him inside the structure so the match can properly begin. Once the match started, it was, like a lot of WWE Cage matches, not a technical masterpiece but it was a nice, intense brawl with a lot of there signature offense being adapted to suit the environment with one particularly crisp looking Superkick from Tye driving Young's head right into the wall, cutting open his forehead and a 'holy shit'-worthy Elbow Drop off the cage onto The Perfect Ten. The first two thirds of the match had some fine psychology with Tye playing the never-say-die babyface looking to show he can win via pinfall which was sadly hurt by his attempts to escape instead and Young, while the Elbow Drop was spectacular, it did make him seem more heroic briefly but Young, fr the most part wasn't even trying to win the match, just trying to hurt Dillinger. Of course just as Dillinger hit a Tye Breaker and crawled to the cage door, the assorted members of SaNItY would run in and slam the door nearly in his face, followed by Tye's buddies: Roderick 'not as small but still rather small boots' Strong, Kassius 'I look better with my shirt not tucked in' Ohno and Ruby 'my music was the best track from Sonic Generations' Riot to even the odds. Killian Dain would eventually flatten Ohno and Strong against the ring and climb in to make it a two on one but Tye hit a superb crossbody off the top onto both men and rolled out of the cage door for the win. Young and Dillinger play off each other superbly, even if I wish with NXT's love of history they'd have mentioned that Young actually helped train Dillinger back when he was starting out, but both mentioned put in intensity, some fine big spots and using the interference of SaNiTy to tell the final chapter in Dilllinger's NXT redemption tale. The show ends on a deserving 'Thank you, Tye' chant as he's carried up the ramp on the shoulders of Strong and Ohno.

Don't be mistaken by the higher score below, beyond the most English promo ever seen on NXT between Bate & Gallagher and some solid work from Roode & Itami, up until the main event, this week's episode was eminently skippable. That said, the highlights of this week far overwhelm the fact that there was only one good match. I liked that for the second week in-a-row, in between match segments were used to push forward next week's action as NXT is the future, and the future is next week. Even I don't know what that was meant to mean. Either way, if you're in a hurry, watch the first segment and the main event and you're away.