On 23rd May, WWE aired the 927th episode of SmackDown Live from the Huntington Center in Toledo, Ohio. The show saw Shane McMahon announce the competitors in the Money in the Bank Ladder match and Shinsuke Nakamura team up with AJ Styles to face Dolph Ziggler and United States Champion Kevin Owens in the main event, with Natalya, Charlotte Flair, Becky Lynch, Naomi and Fandango all making appearances. But was it any good. Let's take a look. 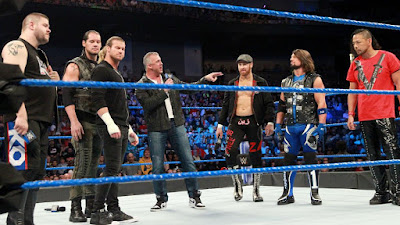 Coming out of Backlash, SmackDown didn't waste anytime in setting out it's shop for Money in the Bank on 18th June. The opening segment had Commissioner Shane McMahon making a pair of matches for the event, firstly a rematch between Jinder Mahal and Randy Orton over the WWE Championship and then the Money in the Bank Ladder match competitors. It's a pretty straightforward line-up with the competitors from the three big non-WWE title bouts from Backlash, AJ Styles, Baron Corbin, Sami Zayn, Dolph Ziggler, United States Champion Kevin Owens and Shinsuke Nakamura getting the nod for WWE's annual high-spot spectacular. Certainly not a shabby line-up, but you've gotta feel for Luke Harper and Tye Dillinger who actually won their matches at Backlash! However, these six lads have the potential to put on a special contest at MITB, with a good mixture of powerhouses, work horses and guys willing to pull off the big memorable spots that the match is known for.

The segment itself was fun stuff, with everyone getting a little bit of mic-time, as faces and heels took shots at each other and set up a pair of matches for later in the show. Styles and Nakamura stood out here for me, with Styles getting a pop for a South Park reference and generally just bringing some energy to his promo, whilst Nakkers is just Nakkers and fascinates me every time he speaks words out of his beautiful mouth. It wasn't all roses though as Owens initially not being part of the bout would have been a nice development, but Shane McMahon gave into his demands so easily that I'm not quite sure why they even bothered with that direction. Corbin demanding the briefcase be lowered and he be declared winner, just two days after staring at the lights against Zayn was a head scratcher also. 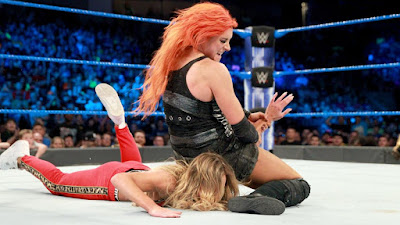 A decent tag bout here, that was arguably more entertaining than the six man tag from Backlash two days earlier. After a sloppy start between Carmella and Becky Lynch, that played out in front of a dead crowd, the bout managed to turn things around after the ad break with Lynch's hot tag to Charlotte Flair getting a big reaction. The match actually stayed on the screen during the break, but it was difficult to focus on the action with various fast-food adverts blaring away at the same time, so I'm not quite sure what got the crowd so invested, although considering this was the opener it perhaps took Toledo a few minutes to get warmed up. The finish was done well with lots going as Naomi, Tamina and James Ellsworth got involved at ringside, Natalya threw Flair across the ring with a German suplex and eventually Lynch got Carmella to submit with the Dis-armer to bring a frenetic few minutes to a close. Flair, Lynch and Naomi all celebrated their victory together with no turns, so who knows where the SmackDown Women's division is heading right now. 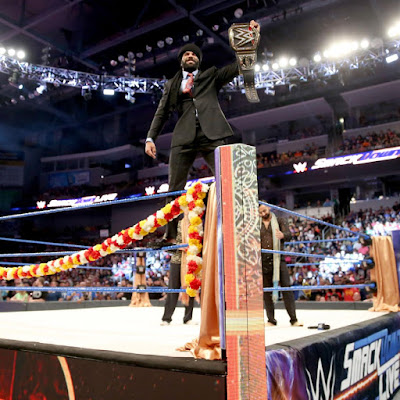 JINDER MAHAL IS WWE CHAMPION AND HE IS FROM INDIA! That was this segment in a nutshell as WWE came out all guns blazing with a Punjabi Celebration for the Maharajah, with lads playing the dhol drums and dancing and what have you, the Singh Brothers mugging about, shit loads of pyro. Just like the assertion that the entire of India was watching and losing their minds for Mahal and having JBL throw out ridiculous comparisons to Mahatma Gandhi and Mother Theresa, the whole segment was about making Jinder look like a big deal and the segment definitely hit that aim. Mahal's promo wasn't anything special and wasn't helped by the champ losing his voice, but it got over his character and his issues with the audience and then talking in Punjabi managed to conjure a "USA" chant. Whilst I'm pretty sure WWE did the exact same angle when The Great Khali won the World Heavyweight title in 2007, the segment had it's own charm and I doubt most of WWE's audience remember Khali's run almost ten years ago. 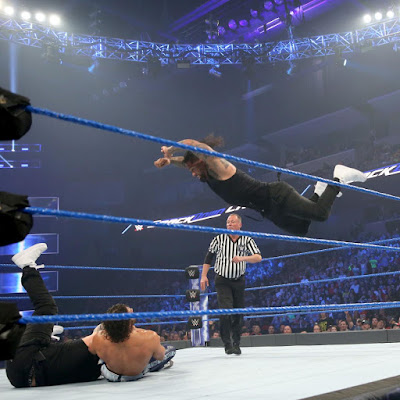 A brilliant piece of booking here, that had Toledo completely invested in Breezango as first Tyler Breeze got a quick roll-up victory on Jey Uso, before Fandango took advantage of Jimmy being distracted by Breeze's out of the ring antics to do the same on the other brother. Breezango asked for a title shot and with a masterstroke of having the referee get on a headset to confirm things with Shane O'Mac we had a SmackDown Tag Team title bout there and then. The Usos controlled most of the bout, but the reactions for two near falls for Fandango were something special. The first came off the hot tag as The Ballroom Brawler hit a tornado DDT and simultaneously kicked out at the other Uso, before the second topped it as Deputy Dango got his knees up to block a Samoan Splash that came after a barrage of super kicks. The finish featured some lovely ideas as Fandango hit Beauty in Motion and then got caught with a Samoan Splash (Uso #2 had sneakily tagged in moments earlier). The camera work and timing could have been better, but that didn't stop this from being a strong finish to a terrifically entertaining tag bout. I'm hoping against hope that this isn't the end of Breezango's push as both lads deserve a reward for their stellar work over the last month or so. 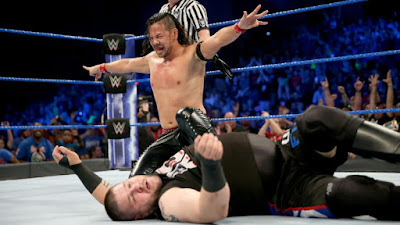 This match had more than a few similarities with the RAW main event (Samoa Joe & Bray Wyatt vs. Roman Reigns & Seth Rollins) the previous night, mostly in the general feel of having four top level since stars in a tag bout for the reason that they needed a main event. I preferred the RAW match, mainly because the storytelling was much stronger, as parts of the booking here didn't quite work. Having Nakamura as the initial face in peril was questionable choice, because it exposed more than was necessary on his TV debut, yet the crowd was into it and began chanting for Styles. Also Styles not selling the leg injury that was major part of the storyline of his match with Owens the previous night was a real waste, as having him hit Ushigoroshi as part of his hot tag, only to have his knee give out and the momentum switch would have helped drive the later half of this 25 minute plus contest. The bout did have some cool moments though, like Ziggler counting along with an Owens pin with his back to the ring and Owens assault on Styles with a Senton on the floor and then running football kick to the spine that knocked AJ off the apron.

After the second hot tag the match really came to life as we got Nakamura cleaning house, finally beginning to look like the bad ass he's been pushed as on SmackDown, before a great sequence involving all four guys. After Nakamura hit the inverted exploder on Ziggler, Owens blocked the Kinshasa to the Show-Off, Styles hit a Pele Kick on the New Face of America, Ziggler blocking a Styles Clash to Owens with a superkick before taking a running single leg dropkick from Nakkers, who then finished off Owens with a Kinshasa to pin the United States Champion. The last stretch was a great advertisement for Money in the Bank as it showed what the four could do in a spot-based environment, it was just a shame that it took so long to get to. Owens taking the pin, whilst being United States Champion, especially after only getting a countout win on the PPV, was a strange decision, but I suppose the thinking was that Owens is more than capable of covering for it on the mic and Ziggler was guy in the MITB that most needs building up. 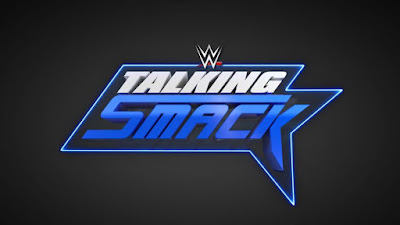 It was so good to see Big E, Kofi Kingston and Xavier Woods on my TV screen again! After over a month and a half away, their words felt as fresh as a big bowl of Booty-os. The boys chatted about what they'd been up to away from WWE, with Big E talking about performing a marriage ceremony, Kingston talking about healing up his ankle and Woods talking about his new baby. The stuff they were talking about was hardly ground-breaking but the chemistry and relaxed nature of the interaction gave it a certain charm with a couple of laugh out loud quips along the way. The chat about actually being on SmackDown and the tag team division was overall pretty generic, although a throw-away line about JBL calling the Usos "the greatest team of the last half-decade" did provide an interesting potential storyline for their full-time return.

I like how understated Naomi is on the mic, she sounds confident, but not in an over-the-top or exaggerated way, she feels real and that makes it easy to connect to her story. The SmackDown Women's Champion turned up to discuss next week's #1 Contender bout, talking about the possibility of facing Carmella, who has pinned her twice recently, using her history to explain why she will never underestimate an opponent. The chat moved into Naomi's outside life and her journey to become a professional wrestler, a story that I knew very little about. It's the fleshing out of backstories and creating a rounded picture of performers lives that Talking Smack really excels. It wasn't must see, like some of the previous interviews, but I think it will add an extra dimension to Naomi's bouts for anyone who did see it.

A solid episode of SmackDown heading out of the PPV, setting up the direction for the next few weeks as we move towards Money in the Bank next month. The main event under delivered, but I feel like almost every other segment on the show over performed. Breezango and The Usos was entertaining as fuck and had the crowd believing Tyler Breeze and Fandango could take the tag titles, whilst Jinder Mahal's Punjabi Celebration felt fresh and benefitted from know run in from Randy Orton. This show did it's job in shifting stories along and setting up two marquee bouts for the next PPV and remained a comfortable watch across the hour and half.