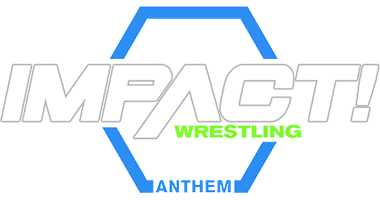 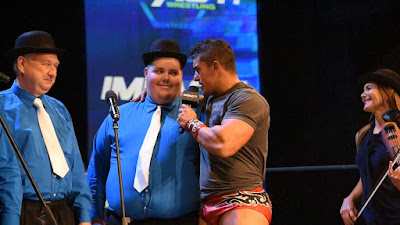 Ethan Carter III's victory celebration, after becoming #1 Contender last week, was utterly ridiculous, over-the-top and thoroughly entertaining as the 2 time Impact World Heavyweight Champion introduced us to his barber shop quarter, cellist and violinist. This was similar to a segment with Jeff Jarrett from one of the very early episodes of Impact, with each song having me in bits and EC3's off the cuff remarks complimenting the musical frivolity well. The quartet sang his theme music, then "For he's the number one contender" before finishing up with "Goodbye my Bobby Lashley babe" and it was glorious. EC3 hammed it up, managing to be annoying and entertaining, as he named members of the group including Jimmy with the Gimp leg and Tom Foolery, whilst the singing lead perfectly into GFW Global Champion Alberto el Patron's interruption. The segment concluded with Bruce Prichard (joined by Karen Jarrett, Dutch Mantell and Tyrus) cut off a potential scrap by booking the duo for the show's main event with both el Patron's GFW Global title and EC3's Slammiversary title shot on the line. It's all to be inside a steel cage, because...because it will be. The use of Prichard in this segment was head and shoulders above him starting the show last week, although I'm not sure how I feel about having a trio of babyface authority figures flanked by a bodyguard! 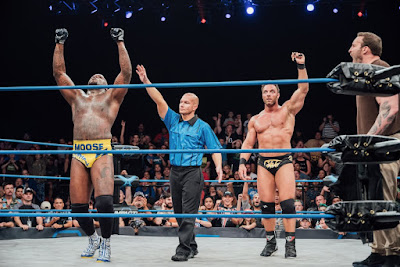 A decent opening contest, with Moose and Eli Drake doing a good job with the three, 3 minute rounds gimmick, working in a nice story with a solid ebb and flow. Drake took the first round, spending most of the match working over the left leg of his opponent, with the bell ringing just as he locked in a Figure Four Leg Lock. The second round continued with a similar feel as Drake upped the ante and wrapped Moose's legs around the ringpost a few times, a closing flurry from Moose including a massive drop kick that knocked Drake to the outside, followed up by hitting a Pop-up Powerbomb, running senton and mid-rope Moonsault all within the last minute. Moose's selling was intermittent and not the strongest part of his game, but he still favoured the leg when it was important to do so, as he couldn't cover Drake after the moonsault. The final round was probably the weakest of the three as I didn't feel like it managed to cap off the story, as well as it could have and any match that doesn't have a definitive finish is always going to end flat. That's an issue with the gimmick itself, but the two did worked in some sound near falls with Drake kicking out of the Go to Hell (Sitout Chokebomb with Drake seated on the top turnbuckle) as well as Eli's second Chris Adonis [Chris Masters] grabbing Moose's leg before a Gravy Train (Over-the-shoulder belly to back piledriver) just before the end of the third round. The highlight of the entire segment may have been Eli's face when it was announced that Moose had won the match, great stuff. 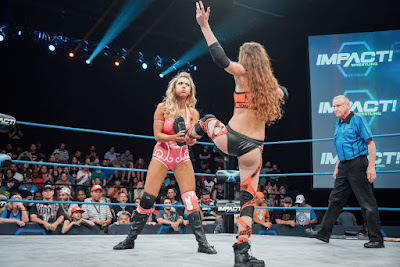 My main takeaway from this match is that the debuting Amber Nova is way too good looking to be an enhancement talent. The photo doesn't do her justice, so Google her or something. From her entrance onward she looked like a star and even with her limited in-ring experience I'd suggest Impact sign her before anyone else does and find some kind of on-screen role as she develops. Obviously looks aren't everything, but they're a bloody good start. The match itself was probably a little too long for what it needed to do, but the focus on Allie growing as a professional wrestler (despite having been wrestling for over a decade) and her underdog character was nice, as she fought from underneath to seal only her third victory in Impact with a Death Allie Driver. The match got her character and story over clearly, but just went a tad too long for me.

LAX def. V.o.W. in a No Disqualification Match to Win the Vacant GFW Tag Team Championship 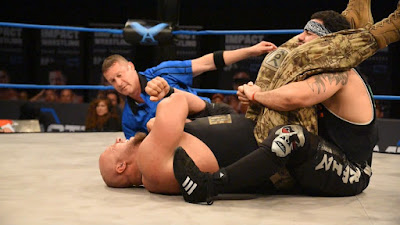 My main issue with this match was that it was No Disqualification, without any need to be. Literally all the cheating or anything LAX (Santana [Mike Draztik] and Ortiz [Angel Ortiz] with Konnan, Homicide and Diamante [Angel Rose]) could have been disqualified for happened with the referee distracted. This would've made perfect sense in a regular match and worked to get the team some more heat when they repeatedly broke the rules to get the victory, but the impact is lessened when the rules are taken away. It felt like the talent hadn't been told the match was No DQ as there was nothing from Veterans of War (Mayweather [Crimson] & Wilcox [Jax Dane]) that would've suggested they had any kind of dislike for Santana and Ortiz and considering the anti-American rhetoric of the group, you would've expect V.O.W. to want to inflict some damage with a few toys, if they could have. Aside from that the match was okay and the timing of some the spots with the outside interference (like Konnan hitting Mayweather with a bat and Homicide whipping Wilcox with an Impact World Tag title belt just as the V.o.W. looked capable of cleaning house) kept the contest entertaining. There's potential in both teams, but they're being under-served at the moment. 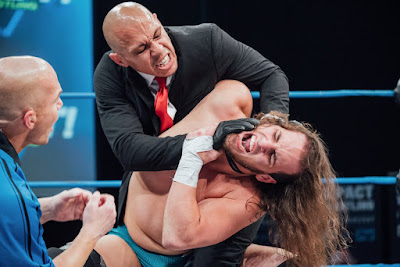 A good X Division title match, that was hurt by Andrew Everett slipping on the loose ropes at a crucial point, as well as having Sonjay Dutt on commentary which distracted from the story of Everett chasing the title after a sizeable build. Before the slip the match was heading in the right direction as Low Ki had spent the majority with the momentum, following a baseball slide through the second and third ropes. There was some nice stuff building up to Everett's comeback with the 24 year old doing a convincing job as the underdog against the vicious World Warrior. A number of hope spots involving kicks and a solid amount of time spent on the mat later and Everett got some space with a tasty Kylo Kick (Backflip kick), before a rana into the buckle and a running shooting star press had the match feeling like it was about to break into something special. Unfortunately, that's where the slip came and whilst the pair quickly transitioned into something else, with Ki laying into Everett before we got a sweet shooting star press near fall, most of the drive had been sucked out. Ki would go on to retain after pulling some wonderful facial expressions in the build towards his corner dropkick before pinning Everett with the Warrior's Way. 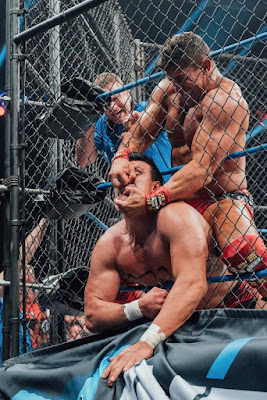 The main event Steel cage match wasn't the neatest of matches you'll see this year and at times even verged into clunky territory, but Alberto el Patron and Ethan Carter III brought the intensity and scrapped it out in brawly main event. With the gimmick being used well, there was lots of your generic steel cage spots early on, alongside some cool use of the comically large camera holes Impact has in their enclosure. The clash built itself up well with both men whipping out a couple of signatures for near falls and getting creative with the structure that allowed EC3 to hit a Samoan drop off the top rope and an electric chair facebuster to thwart escape attempts. The two shifted gears following a double knee armbreaker that el Patron usually uses to set up for his signature cross armbreaker, with EC3 managing to set El Presidente up for the TK3 only to find himself caught in the submission hold. After The Ass-Kicking Machine escaped, he got two decent near falls from the TK3 and a Sitout Powerbomb before the match reached it's crescendo on top of the cage.

The finish here saw the match's most spectacular spot as after el Patron chased EC3 up to the top of the cage and managed to send him into a tree of woe with a series of nasty looking kicks. The GFW Global Champion sat a top the structure and then came crashing down with awe-inspiring double stomp. The move provided the bout with it's memorable moment, before el Patron retained and booked his place in the main event of Slammiversary with a rope-walk Frog Splash. Personally, I would've liked to have seen Alberto get the pin after the double stomp as that just felt like the matches natural conclusion, however having EC3 kick out of the move, before a frustrated champion went deeper into his arsenal, may have been even better. Overall, this was a cracking scrap of a cage match, with big near falls and an eye-catching highspot and whilst it would never get mistaken for a wrestling clinic, that wasn't what it needed to be either.

A better showing from Impact this week in their last show from Universal until Slammiversary. The opening segment was the peak for me, with the Barbershop Quarter complimenting Ethan Carter III's stellar villain work, whilst his main event cage match with Alberto el Patron also delivered. Low Ki v Andrew Everrett showed promise until the slip and Moose v Eli Drake was an okay showing of the pair despite the cumbersome rules of the Grand Championship. Allie's match with Amber Nova went too long and the LAX v Veterans of War match didn't meet my expectations, in part because the match was needlessly labelled as No DQ. Putting the Josh Mathews and Jeremy Borash feud on the backburner was certainly a positive with Mathews commentary with just D'Angelo Dinero being much more palatable than anything that occurred when he was having to bicker back and forth with JB over the matches.

The tapings from Mumbai, India begin next week and I'm more than a little intrigued to see how they come off on television. I'm hoping for a return to the madness that was Ring Ka King as we head toward Slammiversary on 2nd July.