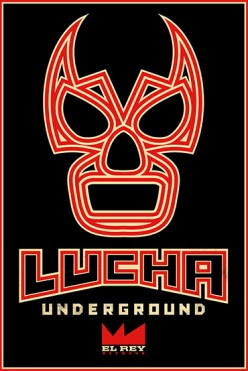 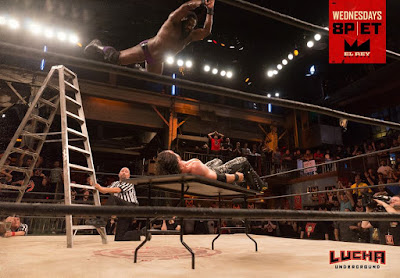 Gosh, if you're gonna do a mid-season break, you better come back with a bang and that's exactly what Lucha Underground did with as Johnny Mundo and The Mack went to war over the Lucha Underground Championship in an Iron Man match that went the entire length of the show. The match unfolded across fourty minutes of television time, twisting and turning, weaving a compelling story that built up Mundo as the villainous veteran willing to do anything to keep his title, whilst Mack was the talented underdog who didn't look like he could last the length of the show. The wrestling almost took a back seat to the epic storytelling, but when called upon both guys worked crisp and fast, with the first ten or twelves minutes was almost all in the ring and held it's own.

Both men's character performances were terrific throughout, but the act Mundo has going at the moment with PJ Black [Justin Gabriel] also, is something else entirely. He just oozes pure dickhead in everything that he does and that makes it super easy to get behind whoever is against him. All of Mundo's falls played into this. The first saw him back out of some back and forth strikes on top of turnbuckle, holding onto the ringpost and leaning back, getting some good heat, before catching Mack, knocking him off the turnbuckle and hitting End of the World (Split Legged Corkscrew Moonsault) for the pin at around the 6 minute mark. Three minutes later and Mundo was at it again, grabbing hold of the ropes after slipping out of a Mack pin with roll-up to take a 2-0 lead. Then for his third, Mundo upped the game as he feigned an ankle injury after hitting a corkscrew plancha, only to kip up and DDT Mack onto a stretcher (that was bought in to take Mundo out of the match). Add the moment where he hid under the ring and then appeared to run away out of the other side, only to appear from under the ring after Mack had given chase to what turned out to be PJ Black, before both men took Mack down with kendo sticks, as well as asking the band to play a victory song with minutes left of the bout and you had an intensely dislikable character, who had cheated his way into the lead and who the audience wanted to see get the shit kicked out of them.

The bout was chockful of massive spots, as Black, Son of Havoc [Matt Cross], Sexy Star and Ricky Mandel all got involved off the match, not just upping the drama as they caused the momentum to swing one way or another but also being part of some of the matches creative highspots. The first big big spot in the match involved Mack getting his revenge for the DDT on the stretcher by tying Mundo to the board and sending him down the Arena's steps, which was as visually thrilling as it sounds. Then the other lads started to arrive as Havoc countered Mundo and Black arriving with Kendo sticks and awoke a shattered Mack with some beer. Then in the aforementioned moment that saw Mundo implore the band to play a victory song, Star was revealed as the groups maraca player, leaping off the balcony onto Mundo and Black to a big pop. The way Mack equalled the scores at 3-3 was probably the most spectacular fall of the match as the Battle of the Bulls winner hit an over-the-shoulder piledriver off the apron through a pair of tables. There was so much woven into the fabric of the story that was told, with each spot coming at just the right time, building the excitement without taking away from what was about to come, that it never felt like the match was dragging and there was always something either happening or right around the corner.

Ending a match like this with a draw is a brave decision, as there's always the chance that the viewer can feel let down by having spent 40 minutes plus with a match only to have it conclude with no decisive winner. However, the last two minutes of the match, made me desperate to see a rematch and even more desperate to see someone knock Mundo off his perch (what a mark, right?), that slippery bastard. It felt like pretty much everyone inside the temple felt the same way, as Mundo missed an End of the World onto a ladder and Mack slowly made the climb up the ladder after draping Mundo across the table. After Havoc and Star had dealt with Ricky Mandel's interference (with the clock still ticking away in the corner of the screen), Mack reached the top exhausted and splashed the Mayor of Slam Town through the table, only for time to run out just as he made the cover. Helped by the crowd's enthusiasm this was a captivating piece of television that pulled me in deeper as the story unfolded and by the end of the show I was hyped to see them go at it again on next week's episode.

There isn't much more to add in this part, the match was great, the whole episode was the match. Go and watch it and enjoy the silliness.