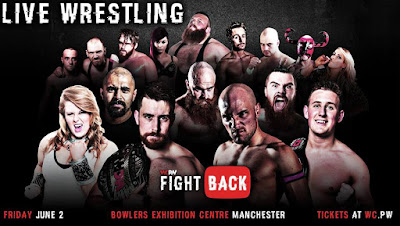 So, this was initially supposed to be a look at the return of WhatCulture Pro Wrestling's Loaded Youtube series, scheduled to run every week at Bowlers Exhibition Centre in Manchester from this Friday. However, things have changed. Earlier this week, the company announced that due to changes in Youtube's monetization policy that now lists wrestling content as "non-advertiser friendly" broadcasting a show on the channel was no longer a clever move financially.

Before I get into what WCPW have come up with to replace the 2nd June event, lets talk about Youtube and the changes they've made. To classify a whole genre of entertainment as "non-advertiser friendly" is quite frankly ridiculous, especially considering some of the other content that the site hosts. The move to make their website suitable and safe for all is a commendable move, but I can't get my head around cutting off the majority of the revenue stream to professional wrestling. There is pro wrestling out there that is all about the violence and I couldn't imagine straight-laced advertisers wanting to be associated with Japanese Death Matches but to generalise when the medium is so diverse, doesn't add up. Imagine banning advertising on all music videos, because some of them having swearing in them? Or advertising on all films because some have sex scenes? Ridiculous. Professional Wrestling at it's core is storytelling, mixed with athleticism and while there's been a few complaints levied at WCPW since their debut last year, no one could accuse them of producing content as "inappropriate". Youtube is a brilliant tool for professional wrestlers and professional wrestling companies, it would be a real shame if that was taken aware permanently.

Luckily, WCPW decided to still run on 2nd June and have created a bigger card of action featuring some of the top talent in the UK, including WCPW Champion Joe Hendry, El Ligero, Rampage, Dave Mastiff, Martin Kirby and more. The Fight Back against the new Youtube rules begins here, let's take a look at what WCPW has prepared for us. The event will air live on YouTube. Tickets are still available from wc.pw 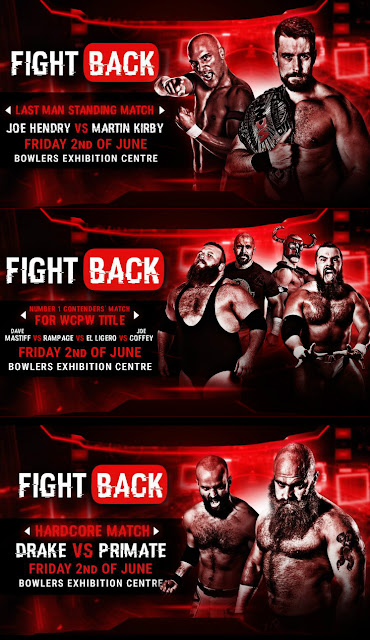 The main event will see Martin Kirby attempting to get the WCPW title back from Joe Hendry in a Last Man Standing match. After Kirby won the title from Drew Galloway in a 30 man Rumble at No Regrets in Newcastle on 29th April, it would be in his very first title defense that Kirby ended up losing the title to Hendry following a referee stoppage at Pro Wrestling World Cup - Mexican Qualifying in Coventry a day later. With Hendry willing to kick Kirby in the head, despite the then champion being clearly knocked out, in order to take the title from him, to say that Kirby wanted revenge goes without say. Last Saturday at Hendrymania in Edinburgh, Kirby got his rematch, only for Hendry's fellow Prestige member Joe Coffey to get involved and cost Kirby the match. There's plenty of animosity here with Kirby desperate to get one over on Hendry, not just for taking his title but the way in which it was done, whilst we know that Hendry will stop at nothing to stay on top of the mountain. This has the potential to be an all out war tomorrow night.

The Four-Way Number One Contenders match features an intriguing mixture of styles and personalities as Joe Coffey, Dave Mastiff, Rampage and El Ligero. Coffey's alignment with champion Joe Hendry and the Prestige could lead to some interesting developments and with one of the strongest records heading into the bout, having only two losses in 2017, one against Rampage last week and the other in a title match with Drew Galloway in March, as well as advancing to the Pro Wrestling World Cup. Mastiff debuted at No Regrets impressing in the World title Rumble and having to be ousted by the all star team of Rey Mysterio and Cody Rhodes, he's got history with all three of his opponents so it'll be interesting see how he slots into this one and WCPW at large. Rampage has picked up two victories over the Prestige recently and after taking part in the first WCPW title match he'll be desperate to get back in the hunt. El Ligero is the wild card here, not just in having a completely different wrestling style and is at least 70lbs lighter than everyone else, but he also hasn't been in a bit of tailspin since dropping the WCPW Internet Title to Cody Rhodes. There's no mistaking that Ligero is the underdog, but with three big lads battering the piss into or out of each other, he may get the opportunity to use his agility to his advantage. There's huge potential in this bout and a hell of a lot of talent, who comes out with the win though is anyone's guess.

After using a wrench to defeat Sha Samuels last week, Drake finds himself in a Hardcore match with a man who has been known to take it to the extreme in WCPW, Primate. With victories in a Boiler Room Brawl and a Chairs match against Rampage, as well as two recent Hardcore wins against Scott Wainwright and Bad Bones, this is a position that Drake didn't look too happy with when Adam Blampied placed him in it. Either way this is gonna be too big blokes beating each other up with some toys. Also on the show, Zack Gibson gets a shot at Gabriel Kidd's Internet Championship and there's also Tag Team Gauntlet to work out who gets a shot at The Swords of Essex's (Wainwright & Will Ospreay) belts as Kid Fite & Lou King Sharp, Prospect (Alex Gracie & Lucas Archer), Johnny Moss & Liam Slater, Kings of the North (Bonesaw & Damien Corvin) and Polo Promotions (Jackie Polo & Mark Coffey) battle it out.