This series plans to take a week by week look at how the RAW, SmackDown and ECW on Sci-Fi developed under this new rating, as well as the quality of the PPVs. The era hasn't been particularly romanticised, especially by the older generation of fans, but considering that those who were ten years old when WWE turned PG are now old enough to be attending University, it's certainly time to look back and re-evaluate just how good or bad for WWE the shift was in terms of quality. 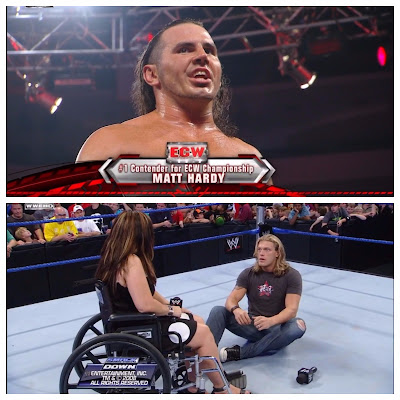 This week's edition see's us feature a Fatal Fourway for a shot at the ECW title at SummerSlam and Edge attempt at an apology to Vickie Guerrero following his affair with their wedding planner, Alicia Fox!

We join the Universe just a few days after the last TV-14 PPV, The Great American Bash 2008/ Just to lend some context, here's the results from that PPV.

This week's trip to the "Land of Extreme" brings us a main event of The Miz, John Morrison, Matt Hardy and Finlay battling it out for a shot at Mark Henry's ECW title, which whilst sounding like an interesting match, makes little sense considering all four men lost on the PPV...but was the show any good? 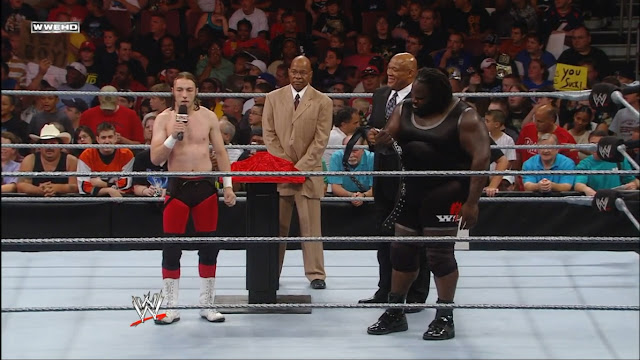 An eventful opening segment to begin the show, as we get a new ECW title belt, a promo from Tony Atlas and Colin Delaney (who Atlas calls "Collars Delaney" for reasons) explaining his heel turn from two days earlier. It's not a good segment by any stretch of the imagination, but there was something persevely entertaining about watching Teddy Long and Atlas stumble through their awkwardly worded promos. Considering the show is in Philadelphia, the home of the original ECW, Atlas gets very little heat for mentioning that fact and then telling the crowd "for all of you all, who tired to hold onto yester year, you're going to get squash". I would've expected the comparisons between the two ECW brands to met with at least some kind of derision, but this crowd is almost completely apathetic towards Atlas and his charge Mark Henry. Perhaps by after two years of WWE's version of ECW the crowd had gone past the point of caring that it bore zero resemblance to the rebellious company that Paul Heyman used to run. However, they do come alive once Colin Delaney starts burying Tommy Dreamer, eating up Delaney's burial, before Long gets a nice pop from announcing we're getting Dreamer v Delaney next! 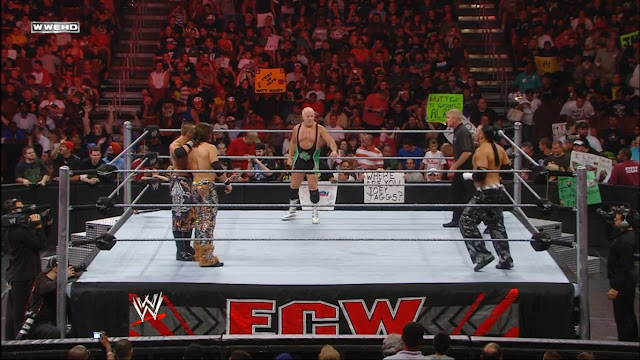 Despite a shaky start and some terrible commentary from Mike Adamle, this ended up being a more than competent television main event. The opening played up the partnership between The Miz and Morrison, but lacked any notable action as we got the four repeatedly splitting off into pairs and not a whole lot else. The action in the first third was dull and slow and despite all four men being in the ring for an extended period of time, not much actually happened. However, once the action spills to the outside things begin to pick up, as Morrison and Finlay brawl on the outside, before Miz & Morrison are able to hitting their catapult into a forearm smash and then elbow drop/backbreaker combination using the barricade on the Irish man. After this things are much better, with Miz and Morrison trying for victories on Hardy, whilst trying to outwit each other at the same time, before we get a couple of sequences with all four men involved that are particularly well-done. The finish is a frenzied affair with Finlay nailing Miz with a Shillelagh, before getting knocked to the outside himself with a roundhouse kick from Morrison, leading into Morrison springboarding into a Twist of Fate from Hardy to take us home. Despite the early awkwardness and the lack of any convincing near falls, the last five or six minutes featured some really good TV action and provide us with the first recommended match of the PG Era.


A good main event, but beyond that there wasn't much on this episode and it's clear that WWE isn't putting a whole lot of effort into the brand or anyone on it. Colin Delaney cut a strong promo in the opening segment, but was surrounded by bumbling speeches from Teddy Long and Tony Atlas and then had his feud with Tommy Dreamer almost immediately put to bed. The build towards Matt Hardy vs. Mark Henry at SummerSlam begins next week so it shall be interesting to see how that is handled and where the likes of Finlay, John Morrison, The Miz, Evan Bourne, Chavo Guerrero and Tommy Dreamer find themselves fitting onto the hour long show.

The episode aired on 25th July 2008 on the CW Network, having been taped on 22nd July at the Wachovia Center in Philadelphia, Pennsylvannia. The episode included Edge's apology to wife Vickie Guerrero after the previous episode revealed he'd been cheating with wedding planner Alicia Fox and an edition of The VIP Lounge (hosted by Montel Vontavious Porter) with Jeff Hardy, but was it any good? Let's take a look.


The VIP Lounge with Jeff Hardy 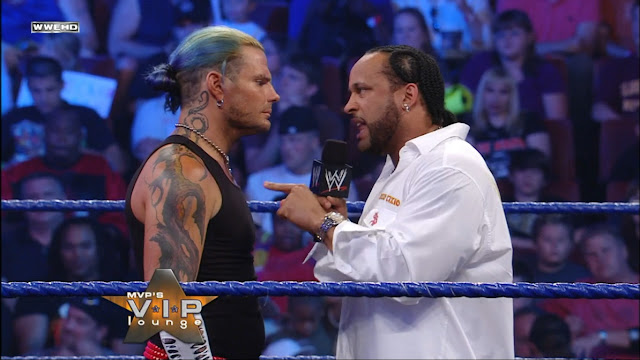 I didn't enjoy this segment at all, but the Philadelphia crowd was massively into both men. The main thrust of it was that MVP was being a massive dick to Jeff Hardy, bringing up his suspensions, issues with drugs and the death of Hardy's dog, Jack, whilst Hardy looked uncomfortable with the content, delivered his lines with very little enthusiasm or believability and looked like he'd rather be anywhere else. Some of the dialogue was terrible here, when MVP bought up Hardy saying in WWE Magazine (remember that?) that he wouldn't get suspended again, Hardy replied with "I wouldn't, I'd be released", which, whilst in line with WWE wellness policy rules, is hardly the most inspiring babyface line. We close with Hardy pushing MVP over and shouting "You make me sick", for reasons I'm not quite sure. They'll both be involved in the "Biggest Blockbuster of the Summer" Battle Royal later on for a shot at Triple H's WWE Championship at SummerSlam. 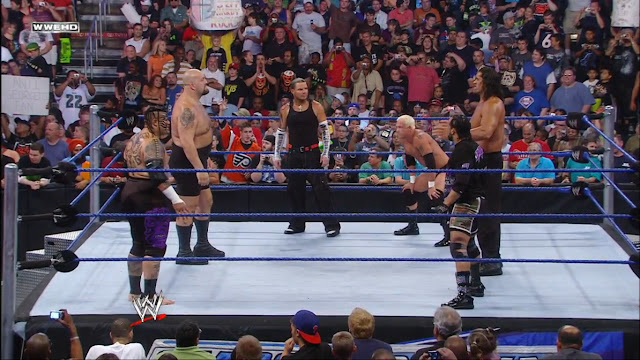 So when I saw the lineup for this battle royal and knowing the time period, I thought this was going to a car crash and it wasn't. Was it a classic? No. But it was well-booked and made the most of its components. We had Mr. Kennedy, The Great Khali, MVP, Umaga, Jeff Hardy and The Big Show; six men who didn't make it onto the Great American Bash card in an unusually thin over-the-top affair. This took away part of the spectacle of a battle royal, but also negated those early stages where a bunch of no hopers are thrown out. The opening portion was kept interesting with a couple of nice spots, like a Poetry in Motion to Khali from Hardy using Kennedy, a Khali and Show face-off being interrupted by a pair of thrust-kicks from Umaga and a Whisper in the Wind from Hardy to Umaga. The match built well towards its conclusion as Hardy eliminated Show by turning a powerbomb into modified hurricanrana that sent the World's Largest Athlete over the top rope, leaving The Charismatic Enigma alone with The Great Khali. The crowd was super hot for Hardy, with Philadelphia desperate to see the underdog overcome, however despite a Swanton Bomb and a low blow to escape a vice grip, Khali picked up the win, dumping Hardy over the top after a Khali Chop. We get a staredown between Khali and Triple H to end the segment and I am already dreading this match. 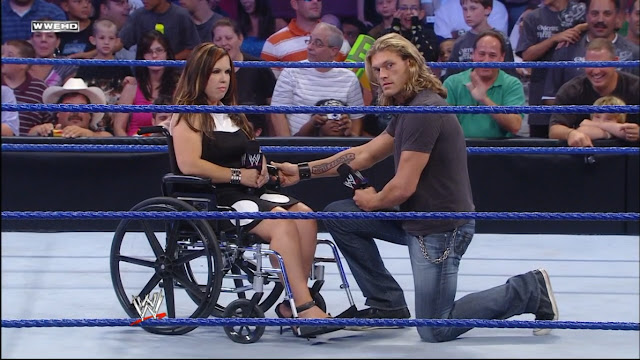 Edge and Vickie Guerrero were both brilliant in this segment as Guerrero took revenge for her husband's infidelity by reinstating The Undertaker and placing Edge in a Hell in a Cell Match with the Deadman at SummerSlam. Edge trying to explain away the footage claiming that "No means no, but she wouldn't listen" in regards to Alicia Fox and then explaining he only got involved with Fox in order to make sure the wedding went smoothly was played perfectly by the Rated R Superstar. Edge gets the cowardly cheat act just right, remaining entertaining and getting a couple of laughs, but also being utterly contemptible as a character and someone who you look forward to seeing getting what they deserve. Vickie seemed to relish getting to say something that the crowd would pop for and paced her lines wonderfully getting a huge pop for almost every word that came out of her mouth. The crowd went nuts for The Undertaker coming back, leaving Edge having to let them get on with it whilst looking terrified and trying to come up with a way out of facing his rival again. The segment could have done with a better conclusion as once the announcement has been made there was a lack of a climax or conflict, perhaps just playing Undertaker's music and a few special effects would've rounded off the segment perfectly.

Not a terrible episode, but not a great one either. This is pretty much saved by the strength of it's closing segment as Edge and Vickie Guerrero shone in an emotional climax that both played wonderfully, as the opening segment was dire and the Battle Royal was okay. Elsewhere the show was filled with short, inconsequential matches, that did very little for anyone.

An interesting start to the PG Era as ECW and SmackDown took the leap first. The ECW Four Way main event producing the strongest action of the week, whilst the closing sequence of SmackDown was a great example of the chemistry between Edge and Vickie Guerrero and just why that feud involving the pair and The Undertaker worked so well. Across the three hours there was a lot of talking, with three of the five major segments being promo based and I noticed that the matches were a lot shorter than what we are used to seeing in 2017. When we begin to include next week, a show that is known to include more talking and entertainment segments, it will interesting to compare that to what the other two brands were offering, as the company moves away from the adult and teen orientated programming that caused it's late nineties boom and more towards the family and children market.

Next week - RAW features a Tag Team main event pitting John Cena & Batista against John "Bradshaw" Layfield and Kane, ECW sees John Morrison and The Miz take on Finlay & Hornswoggle, SmackDown features a classic segment between Edge and Mick Foley, before the Rated R Superstar faces off with one of his signature foes, Jeff Hardy, on the final Saturday Night's Main Event.