On 16th August, WWE aired its 261st episode of NXT, taped at Full Sail University, Winter Gardens, FL on 12th July. The evening's main event would see Roderick Strong take on Drew McIntyre with Strong getting a match with Roode should he win. There was also action from Ruby Riot and Billi Kay, the team of Montez Ford and Angelo Dawkins otherwise known as Street Profits, Lars Sullivan and a contract signing for the NXT Women's Title match at BKLN III. As the last stop on the NXT train before the show reaches Brooklyn, could it do the job of getting us all appropriately hyped up for the biggest show of the NXT year? 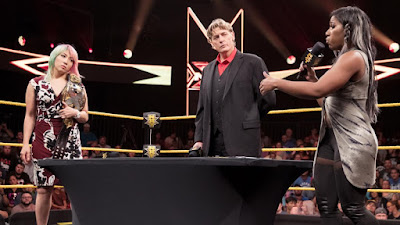 Has anyone ever wondered why only certain matches have public contract signings? If there's no audience to witness the contract signing, has the match even been officially sanctioned? Anyway, Regal introduces our two competitors to the ring with Moon coming out looking all 'I like multiple different fantasy things' and Asuka but looking like she could give you a loan but she might murder as interest payments. Moon puts over quite how long and dominant Asuka has been, even surpassing Goldberg leading to 'Ahhh-Suka' chants, but Asuka had to use shortcuts to beat Moon, first at Dallas then injuring her to stop her competing at Chicago but she made a big mistake by not finishing the job as Ember intends to destroy her, to break her streak and take her title. Asuka responds in turn by not saying shit, signing the contract, oh then she says something scary in Japanese, they then do that thing where they get super close to show intensity. Ember has never been the most natural promo performer but the closer she's been getting, the more she's knocked down and the more desperate she's become, the more I can believe that she could beat Asuka and that's entirely down to performance. That said, Asuka is really scary, especially when she talks in a language I don't speak. I'm expecting big things from them come Saturday, big things indeed. 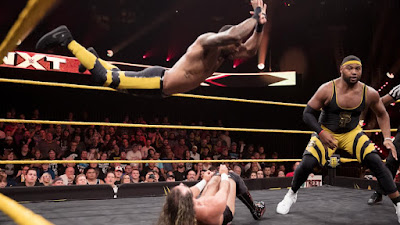 Silvio appears to be a tiny Mark Haskins in a bad John Morrison cosplay coat. Silvio tags himself and is immediately shoulder blocked to the floor by Dawkins leading Ford to run into the crowd and celebrate wildly, it works as the crowd get pretty hyped up, Ford is tagged in for the basement dropkick- standing splash combo, Ford works over Silvio's back as Silvio tries to tag in Sullivan but fails, Ford tries to knock Sullivan off the apron but he's too much big lad, tag in Dawkins, a 360 spin punch, a tag back to ford and a Pop-Up Spinebuster-Frog Splash Combo gets them the win. Harmless fun that does enough to add another notch to the fledgling tag team's win belt while building up to us potentially seeing Lars Sullivan in an actual match, we can only dream. 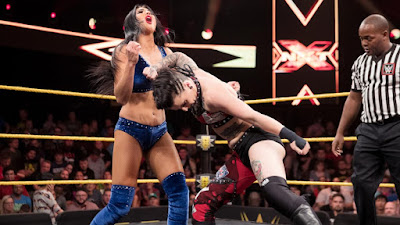 As they walk to the ring. Percy Watson says the Iconic Duo are ugly on the inside, bit harsh lad, Riot tries to lock up to start but Kay repeatedly dodges, white Royce distracts Kay goes for a clothesline but Riot dodges and tries multiple roll-up combinations and a sunset flip for a 1 count, a back kick and a discus clothesline for a 2 count returned control to Kay who attempts control with corner stomps, Riot tries to fight back with chest strikes but Kay regains momentum with a straight jacket leg stunner, she uses an arm takeover into a wristlock transitioned into a modified surfboard submission, Riot escapes with a series of kicks culminating in a big running missile dropkick, run into the corner and catches Kay in the nightshade, she knocks Royce off the apron, Kay grabs Riot from behind but Riot hits her Wind-Up Kick finisher for a pin. Decent fun but I would've liked to have seen what could've been done with a longer match. 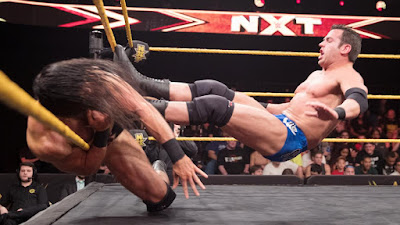 FInally, the PWG Championship rematch that everyone's been waiting for as the former Drew Galloway takes on the still Roderick Strong. McIntyre comes to the ring looking his greasiest but clearly that grease gives him strength as he powers Strong into the corner and then pushes him to the mat, Strong manages to comeback with a headlock, runs the ropes and hits a leg lariat, more rope running but McIntyre hits a gut boot and deadlift suplexes Strong. Strong hits a beautiful standing dropkick to McIntyre's head and basement dropkicks him out of the ring, the two trade strikes at ringside, Strong is launched shoulder-first into the top of the post, McIntyre is ragdolling the fuck out of Strong, Mauro takes a moment to point out the EDUCATED FEET of both men, McIntyre gets Strong on the apron but Strong reverses with a sick kick into a backbreaker leaving McIntyre prone at ringside, cut to ad-break. Back from the ad-break and Strong is controlling the match with strikes and yet more backbreakers, kneeling abdominal stretch from Strong, McIntyre tries to escape but Strong beats him back down and hit a running kick, a knee strike to ground McIntyre. He grapples around the bigger lad applying a form of a sleeper hold, Strong tries to speed up the match again and McIntyre hits a massive overhead belly-to-belly, McIntyre does a lot of punches and then hits a single top rope axe handle and a lethal looking reverse alabama slam for a very convincing 2 & a bit count, goes for the Claymore Yakuza Kick but Strong counters with a running knee and a backbreaker for another 2 count, Strong hits a corner knee from the outside and goes up top, a headbutt by McIntyre and some chops set up Strong for a superplex but McIntyre goes nut-first into the turnbuckle and falls into a Tree of Woe position, he tries to wheedle into a spider suplex but is beat back to the tree. Before Strong can do anything, out comes Bobby Roode who pushes Strong off before attacking the still woe-tree'd McIntyre, he then goes back to attacking Strong throwing him into the steel steps before posing in the ring with his belt as McIntyre goes to stand up, he hits him with the Glorious DDT and posing and shouting 'glorious' and whatnot. While there will probably be some who complain that what was becoming a very good match is cut off by heel antics, especially as this is the first time McIntyre's looked interested in what he's doing but it's superb heel work to not just attack two currently beloved or at least beliked faces but also to essentially screw over the fans from getting a proper finish to the match. Roode has at times over his run struggled to actually get true heat (not helped by having that theme music) so this was a well-done angle to push all three men further up the ladder.

This was a perfectly servicable episode of television with very little in the way of surprises (beyond the lovely patio furniture surprisingly close to a large bin during Lars' attack) that pretty much did its job to keep various bits and pieces ticking over till Brooklyn. The opening segment and the main event had fully committed performances by all involved but in between, there was a distinct lack of energy or purpose to the episode. Nothing must-see but certainly nothing offensively bad. That'll do pig.