On 23rd August, WWE aired its 262nd episode of NXT, taped at the Barclays Center, Brooklyn, New York on 19th August before the TakeOver special later that evening. The show's main event had the WWE UK Champion Pete Dunne team up with one-time ICW Champion Wolfgang to take on the team of Moustache Mountain, the man who beat Wolfie for the ICW title Trent Seven and the man Peter beat for the WWE UK Title, Tyler Bate. With appearances from the Iconic Duo: Peyton Royce and Billie Kay, No Way Jose, Sarah Logan & No Way Jose, could it break the post-TakeOver curse and deliver a knockout hour of television? 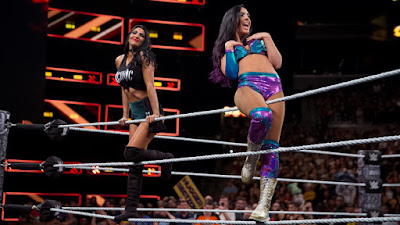 Between her outfit, theme music, titan-tron and the commentary team, they are really playing up how much of a 'country gal' Sarah Logan is, did you know she wrestled a goat? They begin with a lock-up, Logan takes control with a headlock, broken by Royce, Wristlock, broken by Logan who lifts up Royce, Royce escapes, headlock, rope bounce into a shoulder tackle, drop toe hold into an armbar takedown, Royce breaks out, throws Logan to the ropes and hits a spinning heel kick, in the corner Royce continues her kicks and chokes her with the sole of her boot till the referee breaks it up, slap, middle rope hanging knee, rope assisted octopus hold, strikes, Irish whip, Royce goes for another heel kick but Logan does to hit a lovely delayed release German suplex, she controls the action with strikes and shoulder barges hitting a front dropkick for a 2 count. On the ropes, Logan goes for another suplex but Kay on the apron, holds on to stop Royce being hurt but ends up with Kay taking the bump, O'Connor roll by Logan for a 2. Roll-up by Royce for a 2. On their feet and Royce hits a knee strike and a Bridging Fishermans Suplex for the win. I don't know what the point of playing up Logan's involvement in the Mae Young Classic only to have her lose is. The match itself was as good as you can expect from a just over 4 minute standard NXT match but really it just seems like a wasted opportunity, just use a Liv Morgan or an Aaliyah for this and it's perfectly fine but if you want to make the MYC seem like it could be anyone's to win, don't have them taking relatively clean losses just days before. 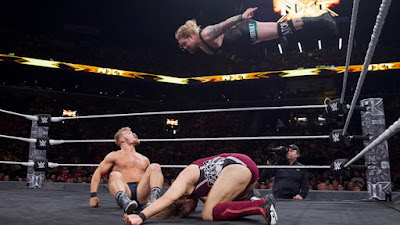 As they make their entrances, Tyler is over as fuck, Trent is over as fuck, Peter is over as fuck (almost too over, once again Brooklyn, boo the damn heels), Wolfgang is there too. Pete and Tyler start off the action giving us some proper catch-as-catch-can graps on the ground with Peter nearly getting a pinfall early, kip-up from Bate as they bask in the glow of how good they are for a combined in-ring age of 43! Back from the break and Bate hits a dropkick, tags in Seven who hits something like Wade Barrett's old Wasteland finisher before Bate bounces off his shoulders to hit a meteora, Peter hits Seven in the jaw, tags in Wolfie, Seven fights back with some of the best chops in the game and a lovely DDT, Peter distracts Trent in the corner, allowing Wolfie time to recuperate and hit a running uranage slam for a 2 count. Wolfgang tags Dunne back in who works the shit out of Trent's arm joint twisting it almost into itself before curb stomping the shoulder, kicking and twisting it repeatedly, Seven and Dunne seem set to win the gruntiest match of the year award for this. Peter having all but broken Trent's arm goes for a pin but only gets a 2. Peter & the Wolf work on stopping Seven getting the pin, Wolfie tagged in hits two gutwrench takedowns,  gets Trent in a fireman's carry but Seven escapes, the two men trade waistlocks and Seven hits a dragon suplex, the duo crawl to their respective corners and tag in their partners. Tyler hits a gutwrench suplex followed by a deadlift German but Dunne flips out of it, throws Tyler to the ropes who hits his springboard rebound lariat, followed up with an airplane spin which goes on for ages till he drops Dunne back and Wolfie stops a pinfall happening but takes a massive chop from Seven for his effort. Trent then in turn takes a big forearm from Dunne who in turn gets both Bop and Bang from Bate, step-up enziguri from Dunne, allowing him to blind tag Wolfgang, Bate thinking Dunne is still the legal man hits a Tyler Driver '97 but Dunne rolls out of the way as Wolfgang connects The Howling Swanton Bomb for the pinfall victory. Wolfie can't take his eyes off that lovely UK title belt as they celebrate. The in-ring action was excellent as you could expect from these four who work hard to get the crowd excited and excited they do indeed get. It does suffer from that overall feeling that singles competitors doing a tag match can where it feels like it's fully going through the motions in terms of structure and invention. Hopefully the potential Wolfgang vs. Dunne match lives up to expectations as Wolfgang did get a lack of response in comparison to the British Strong Style lads but then, Brooklyn does seem to have a lot of beach-ball loving dickheads in the audience. That said, still a very fun match.


Well what did you expect from the post-TakeOver NXT? If you really expected anything amazing, well you're just being silly. The main event was a very fun tag match but really by now we all know an accept that this is an episode of water treading TV. Check back in next week to see if I care again yet.