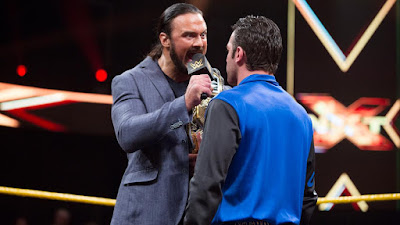 Drew comes out looking like at least one million Scottish pounds, he says that this is what his life has been leading to but he's aware that the title is a target as he's already been attacked but that he's putting everyone on notice, it's his world and if they want a shot at the champ all they have to do is step into the ring, look him in the eye and ask him to fight. Out comes Roderick Strong with his tiny boots, he wants to be the first to congratulate Drew but also agrees that he is the target, he saw what happened at TakeOver: Brooklyn III but he doesn't care, he just cares about his family and that title. After he beats Bobby Roode, he wants a title shot. Drew is impressed, he says Strong stepped up like a man, he hopes he's ready to get knocked out like a man. Solid stuff, short, to the point, got the job done. After these two's last match just two weeks ago, a re-match with a less screwy finish could be marvellous. 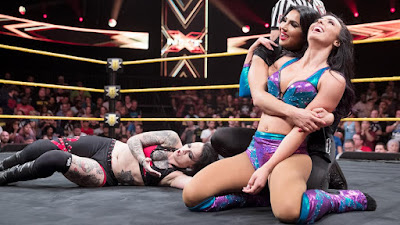 Full Sail is split in its support for both women, how many times do I have to say it? Boo the heels, Royce is out for revenge after Riot beat Kay a few weeks back. Lock-up to begin and Riot powers Royce to the corner, Royce fights back and starts talking shit but Riot doesn't take shit and traps her in a side headlock, Royce breaks out and hits a headscissors, Riot escapes and hits a dropkick for a 2 count. Ruby grounds Royce but before she can do anything Royce takes her out with a kick, Royce begins working over RIot and sends her out of the ring for an ad break. After the break, Royce has her back in the ring in a headlock and begins slapping the former SHIMMER tag team champion, but the slaps just make her angrier and Riot begins to run... riot (you've used that joke now Joe, you can never use it again) hitting clotheslines, kicks, a dropkick and a corner superkick for a 2 count. Riot goes up top but Royce gets up there, Riot says 'nahh' and pushes her off but Royce hits a lovely spinning heel (boo the heels) kick and a death valley driver for a very close 2 count. Royce goes for another kick but Riot dodges and hits a powerbomb for another close 2. Kay pulls Royce out for some air but RIot takes them both out like a bullet with a lope suicido, as the two competitors are climbing back in the ring, some heel shenanigans with the ring apron and a big boot from Billie Kay lead to Riot being rolled back in, Royce hits her Bridging Fishermans Suplex for the pin. This was a lovely, little match that made the most of the time given and did a lot to showcase Royce and how much she's improved. The heel shenanigans stop Riot losing too much with the loss even if it was probably a 70/30 split of offence in Royce's favour. There was nothing here you haven't seen before but it was all delivered crisply with a decent amount of thought for structure. A win over Riot also puts Royce probably in the conversation for a chance to claim that vacant Women's title. 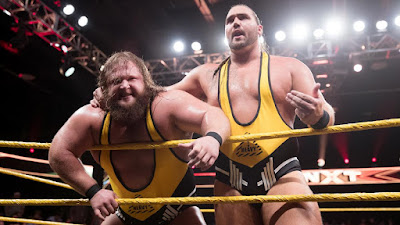 Quick squash mate, you know what what happened. Dosevic hits things, tags in Knight, he gets some offense, the other two briefly work over Knight, he fights back, does big things, tag in Dosevic, they do their tag moves and get the win. I missed a lot of this fight trying to look up the names of their competitors for this. It was fun for what it was, I guess. 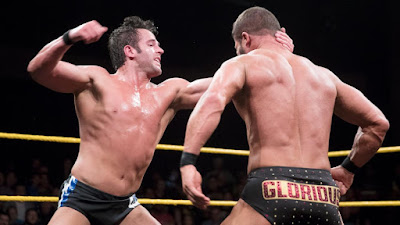 There is a crowd feeling that this might be Roode's last NXT match as he gets 'thank you, Bobby' chants. Bobby is taunting Roddy saying 'you think you can beat me, this is my NXT', before he can say 'glorious' Roddy takes him down. Roode fights back working, yes, corner chops, the two trade strikes with Roddy going for, yes, a backbreaker, but Roode escapes, works a grounded headlock, on their feet, Roode hits some shoulder tackles but Strong hits a beautiful dropkick, Roode manages to fight off Strong in the corner but Strong is having none of it and hits two backbreakers. On the apron and the two trade strikes, Roode sends Strong into the ring-post, on the floor, Strong goes for a backbreaker but is sent into the steps, Roode runs into a big boot from Strong but Strong runs into a spinebuster to go the ad break. Back from the break and Roode hits a neckbreaker for a 2 count. Bobby begins choking out Strong before hitting a backbreaker of his own, you do not break the back of the breaker of backs, taunting Roddy, he works him over on the floor, Strong tries to fight back but gets a whip to the corner for his effort, keeping him grounded with a stretch, powering out, Roddy hits a boot to the gut but Roode hits a Manhattan drop, Roode escapes and hits a massive gutbuster but is so damaged Roode is up first, trading strikes, a running lariat by Strong, massive strikes in the corner, backbreaker for a 2. Suplex set-up tiger bomb into a boston crab but Roode crawls to the ropes. Roddy goes out for a second to catch his breath and comes back in to a TKO and a 2 count. Trading strikes, a spinebuster by Roode who calls for the Glorious DDT but Strong hits an Olympic slam, running high knee and an over shoulder throw for a 2. Roode goes to the ropes and uses them to stun Strong, Roode up top, Strong fights back, gets pushed off but responds with an enziguri into a crunchy superplex for a close 2 count. More trading strikes, Roddy almost jumps straight into the ref but instead runs into a Glorious DDT but is able to get his foot on the ropes. Roode begins telling Strong he is an embarrassment to his family, he'll never be as good as him but Strong says 'm sorry, I couldn't hear you with all those knees in your face, drops the knee pad hits a Lumbar Check Backbreaker but picks up Bobby, blows him a kiss goodbye and hits another Lumbar Check Backbreaker for the pin. This was very good, just shy of great match. The two men didn't have all the time in the world but what they had they used to maximum effect with Roode delivering one of his best performances in his WWE run so far. In a shocking turn of events, I actually think maybe the match could have done with more time to flesh out its ending stretch as there did seem to be a bit of a hurry to get done in time for the show to end but the final image of Roddy's kiss goodbye did work well. This is another important and convincing victory for Strong who if he continues to perform like this should be holding that shiny gold NXT belt soon. Talking of the shiny gold belt...


A marked improvement over last week with some good set-up for next week and a nearly incredible main event with a fitting possible send-off for Roode's tenure in NXT. It'll be interesting to see how things progress going forward with Team ROH attacking everyone and the taunts of Roderick Strong possibly joining, could we see a Roddy heel turn? COuld we be building to a TakeOver Team NXT vs Team ROH Survivor Series match? Who knows but I am certainly intrigued to find out.