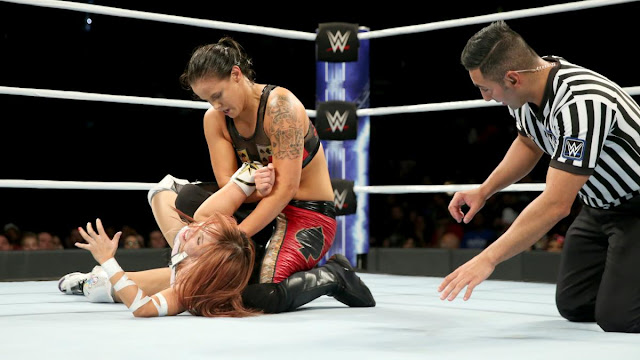 On 12th September 2017, WWE aired the Final of the Mae Young Classic live on the WWE Network, from the Thomas & Mack Center in Las Vegas, Nevada. The show featured Kairi Sane [Kairi Hojo] and Shayna Baszler battling it out to become the first ever Mae Young Classic winner. But was it any good? 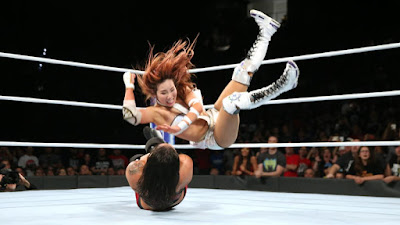 This was a good match, but I can't help but thinking that it could have and perhaps should have been a great match. A lot of my issues with the Mae Young Classic had been down to the women never seeming to have enough time to tell some of the stories they were attempted to tell and unfortunately this was the case for the final as well. Less than 12 minutes was not enough time for these ladies to showcase their skills and it left the match feeling stunted, as they introduced a number of story threads but never seemed to anything with them. The early part of the match was arguably the strongest, with Baszler going for submissions early and Sane transitioning into a pinning combination on each one. This made it clear from the start the kind of dynamic that we would see and put over both as a potential threat to the other. Both produced some lovely looking strikes throughout the bout with Sane's double handed chops and Baszler massive roundhouse that knocked Sane to the outside standing out in particular, the wrestling wasn't always as clean and crisp as it could've been, but rarely did it look close to being sloppy. The two main narrative that the bout introduced was Baszler focusing on Sane's elbow (which Jim Ross called a "solar plexis" for some reason) and Sane zeroing in on a rib injury after nailing her interceptor spear. Both of these threads could've done with at least another five minutes to fully develop. Sane's elbow in particular seemed like something that could have been used to heap more drama onto proceedings, especially when her finish is a diving elbow drop and whilst we saw flashes of solid storytelling, like Baszler blocking a top-rope move with a kick to the elbow, before locking on a kimura, there was a lack of follow through in those closing stages that could've lifted the match above. Despite my complaints, this was an enjoyable match, with my highlight being Sane escaping a rear naked choke by jabbing at Baszler's injured ribs (with Baszler selling being exemplary) and feel like the best is yet to come from both ladies as they continue to grow as performers. I just hope that they get more time to show off their skills on NXT or wherever WWE chooses to place them. 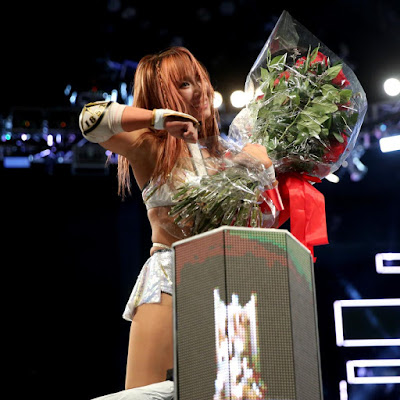 Well, with only one match on the show, there's not really much else to put in the wrap up. The rating got pulled down by the overkill on the build up and whilst I understand that the two girls needed to be introduced to an audience seeing them for potentially the first time and the need for WWE to make this event feel special, it felt like it came at the detriment to the main attraction. Either extend the show to 45 minutes to give the ladies more time, cut back on the build or air the event live from a different venue on a different date where it isn't sandwiched in between SmackDown and 205 Live.