On 14th September 2017, WWE aired its 265th episode of NXT, taped at Full Sail University in Winter Park, Florida on 23rd August. The show's main event match would see the WWE United Kingdom Championship on the line as 'The Bruiserweight' Pete Dunne would take on 'The Last King of Scotland' Wolfgang. With an undercard formed of the team of Street Profits taking on the Ealy Brothers, Johnny Gargano fighting Riddick Moss & Ruby Riot and her mystery partner against the Iconic Duo of Peyton Royce and Billie Kay, it had a lot of potential as an hour of television but as always, was it any good? 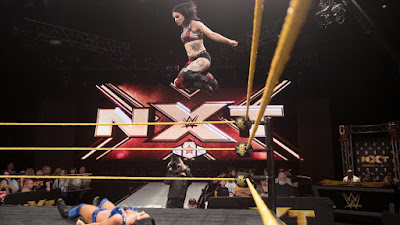 For this tag match, Riot comes out alone, it's not clear whether she couldn't find a partner or doesn't want one. Kay starts for the Icons, Riot immediately goes in with a single leg takedown before grounding and pounding away, Royce comes in but is hit with a dropkick, Kay uses the distraction to hit Riot with a rolling forearm, tag to Royce who clubs the back and taunts Riot screaming 'where's your partner?', drives Riot to her corner and tags in Kay who begins working over Riot. As she does, SaNItY's Nikki Cross enters through the crowd, tag to Royce, Riot and Royce trade strikes, Riot runs the ropes, on the apron, goes for a slingshot shoulder barge but Royce catches her in the ropes with a kick before holding a modified tarantula for a 4 count. Tag to Kay and they hit a double-team slam for a 1 count, which pisses of Kay to no end. Tag in Royce who repeatedly kicks Riot in the gut, tag in Kay, Royce holds Riot still for Kay to hit a forearm but Riot ducks resulting in Kay taking out Royce, Riot rests in the corner for a second and Cross climbs up on the apron and tags herself in which is legal I guess. Cross runs Riot (which I know is Ruby's job but I can't keep making that joke) taking both of them out with big wild strikes, flattens Royce with a running crossbody and hitting her Swinging Fishermans Neckbreaker finish on Kay, she tags back in a confused Riot who hits a top rope senton for the pin. This was a short, but effective match. It's nowt to shout home about in terms of what happens but is worth it for the potential storyline build considering we never got a proper finish to Riot v Cross but also the thunderous reaction to Cross' hot tag. Once again, I must ask, what are the plans for the Iconic Duo because they don't seem to have any sustained momentum or real positioning for the vacant Women's title nor do they actually have a proper storyline running at the moment. Hopefully good things are coming soon for all four competitors as they're all too good to waste. 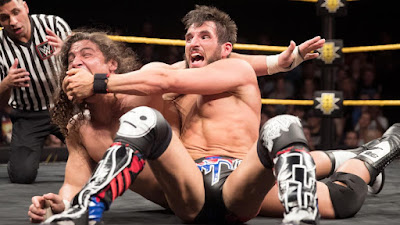 The crowd are firmly behind Johnny for this singles encounter. Lock-up to start, Moss uses his size and power advantage to push Johnny into a wristlock, Johnny wrestlings into a headlocks, Moss escapes, whips Gargano into a shoulder tackle, begins ragdolling Gargano as he hits a side angled body slam and a biel throw, Gargano retaliates with strikes, runs the ropes goes for some form of headscissor takedown but is caught by Moss, he gets Johnny in the fireman's carry but Johnny escapes, Moss throws clothesline but Johnny ducks till he can duck no more and is felled by one, picked back up, gut knees and Johnny is thrown straight into the turnbuckle as we head to the ad-break. Back from the back and Johnny is caught in an abdominal stretch, he escapes with palm strikes but is speared to the corner by Moss, strikes, stomps and Irish whips keep Johnny down but not for long as he responds with lariats and slaps to get Moss to the floor and hits him with the seated roundhouse, back on his feet and Moss is knocked out of the ring with a clothesline and off his feet with a baseball dropkick and an apron cannonball. Rolled back in the ring, Gargano about to follow till Sabatelli provides a distraction allowing Moss to pick up Gargano into what looks like a Razor's Edge set-up but Johnny escapes and uses a tilt-a-whirl transition into the GargaNo Escape but Moss crawls to the ropes. Gargano seems out of it, Moss hits a clothesline and a fallaway slam knocking Johnny out of the ring. Sabatelli goes for another distraction and Gargano hits him with a back thrust kick and takes down Moss with a Slingshot Spear for the pin. I get that the story they're trying to tell is of Johnny still missing something in the wake of his attack by Ciampa but the problem with this match is that Moss wasn't compelling enough as the controlling heel which considering he had about 90% of the offence left Moss with an open canvas to display but he did not rise to the occasion. That said, I think there's a lot of potential here to build Gargano while still keeping him with another win under his belt helps build his character's credibility. 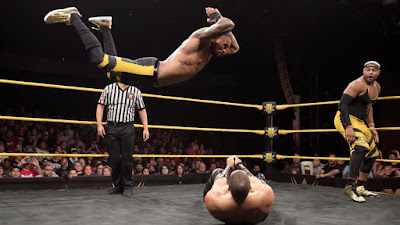 Quick Squash m8. It's happened, Dawkins has finally managed to get the crowd to do that 'stir the pudding bowl' dance, or at least the few of the crowd they show but certainly the 'displaying a picture of a red party cup' like frat house Fireflies seems big. Ford and Uriel start off proceedings, Uriel powers Dawkins to the corner, he tries to take his headbands but Dawkins is having none of it, they lock up, Uriel grabs the headband to which the crowd react like some straight fire rhymes have just been dropped. Dawkins responds by dropping Ealy with a straight forearm to take back the headband, tag to Ford, they hit a basement dropkick-standing splash combo before in comes Gabriel who takes a rope-hung leapfrog back buster. Uriel's back in and gets the same treatment, the Profits do a 'cool' squad handshake, Gabriel powers over Ford using his big lad skills, tags in Uriel for an assisted Irish whip-shoulder block combo, whip to the corner for a corner splash but Ford ducks, both teams tag out. Dawkins hits clotheslines, a dropkick a spinning elbow and corner 360 stinger splashes before tagging Ford and hitting the Spinebuster-Frog Splash Combo for the pin. They celebrate in the crowd who clearly love them. Good for them. Now can we see what they can do with a longer than three minute match? Also the Ealy brothers are very much work in progress but the potential is there. 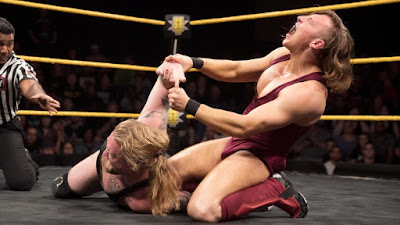 This is only the third time these two have competed in singles action with Wolfgang having victories over Dunne in Cardiff for ICW and Greenock for PBW. They lock-up to begin, Dunne goes straight for the wrist, wrenching the fingers, Wolfie picks him up but Dunne maintains wrist control, powering him into a knee leverage armbar and eventually to the ground where the finger socket manipulation really starts. Dunne drops onto Wolfie and into a crossface cover for a 2 count. Back to standing and back to the wristlock but Wolfie reverses it into a waistlock, into a hammerlock and settling on a cravat hold but Dunne powers to the ropes, sneaking under them, the ref separates the two men giving Dunne an avenue to hit a sneak forearm, grounding Wolfie. Dunne kicks mockingly at his head but Wolfie powers up, he uses waistlock takedowns, a gutwrench slam and a corner splash to take out Dunne, he goes up top but Peter follows him and hits the finger snap and a slingshot apron DDT to head to the break. Back from the break and yes, Dunne is working over the wrists, he gets Wolfie in double wristlock bodyscissors but Wolfie is able to turn it into a suplex, corner splash from Wolfie, running enziguri from Dunne, spear from Wolfie sends Dunne out of the ring, Wolfie powers through his injured arm to hit a beautiful tope con hilo, rolling Dunne back in and he hits a second rope moonsault for a 2 count in what is surprisingly only the second pin attempt of the match. Nige comments on how great the tope was while the replay shows the moonsault, before an X-Plex from Dunne for a 2. Up top and Wolfie follows hitting Dunne with a delayed superplex, back up top for The Howling but Dunne pulls him back down to the mat for an armbreaker, moving into a triangle, Wolfgang powers out Irish whipping to the corner but Dunne hits a Danielson-esque flip over him, forearm by Dunne, a boot by Wolfie, an enziguri by Dunne and he runs into a pop-up powerslam for another 2 count. A release German suplex by Dunne leads into duelling forearms but Dunne comes out on top hitting the Bitter End for the pin. This was a very good, verging on great match but held back by its relatively short time limit at just shy of 8 minutes and a general lack of belief that the title might change hands. Still Dunne, as always, came across as a true star and Wolfgang showed his versatility having played a subtle heel at times during the United Kingdom Championship Tournament, playing a valiant babyface even managing to get the normally terrible Full Sail crowds behind him. I would love to see a rematch between these two with a little more drama to it. What I want to know is with there being no separate UK title show on the horizon, where does the title go from here? Hopefully the UK lads don't go the way of the cruiserweights but with Dunne especially already garnering more reactions than the entirety of 205 Live, I don't think that's going to happen just yet.

After the match The Undisputed Era (which according to the WWE shop is the team name of Adam Cole, Bobby Fish and Kyle O'Reilly) hit the ring, they surround Pete Dunne who looks to bail, putting his title on the apron but fuck that he takes out O'Reilly with a forearm, the rest of the gang jump in, Wolfie comes in to rescue Peter but the number's game is too much, Peter rolls out and considers leaving before looking back at the pummelled Wolfgang and rushing back to grab his title before bailing. Priorities, like. The team once known as ReDragon hold up Wolfie as Adam Cole hits a shining wizard, they retreat through the crowd as Moustache Mountain hit the ring shouting something about being undisputed.


A fun if not entirely essential edition of NXT here with no real complaints about the in-ring action beyond its truncated running times. With the build-up to NXT TakeOver: Houston beginning here, I'd love to see some more energy and intensity injected into proceedings as beyond the UK participants (Nikki Cross included), what what presented felt a tad lackadaisical. Even when NXT is going through some of the motions. it's fun and this was that but still, can't help but feel like this was a case of 'good work, must try harder'.