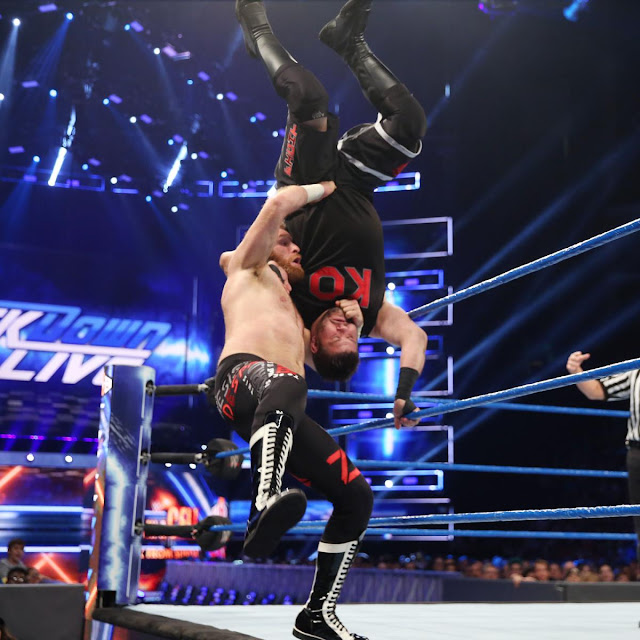 The show began with a recap of the Kevin Owens vs. Shane McMahon feud, showing the footage of Owens beating up Mr. McMahon two weeks ago and both men's promos from last week as this feud really begins the hard sell with Hell in a Cell in just 12 days. 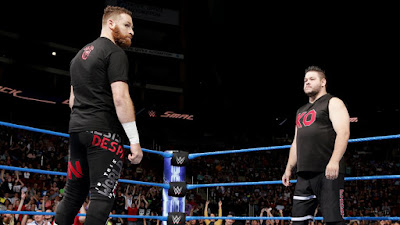 You'd be forgiven for thinking that Kevin Owens currently has the WWE Championship around his waist, because over the last few weeks (and perhaps beyond that), he has been the undoubted star of the blue brand, getting segments with Mr. McMahon and producing some of the best microphone work across WWE's product. This week we saw Owens return to his feud with Sami Zayn, shining new light on the pairs rivalry and creating a particularly strong opening segment, that touched on a number of themes beyond wrestling. Zayn would interrupt a rant from Owens about Shane McMahon not being present at the start of the show, questioning Owens' actions and claiming that he had snapped. It was a nice way to put over the severity of Owens recent shift towards the maniacal, as anyone who had been watching during the WWE version of the Owens v Zayn feud will know how personal and heated that became. I got a real kick out of the morality play elements here, with Owens talking up his accomplishments, despite signing to WWE to years after his former friend, with Zayn firing back with two hard-hitting lines of dialogue. Firstly the "I will do it my way, I will do it the right way" is exactly how the Zayn character should be positioned, whilst the exclamation point came with "When I look myself in the mirror, I don't see a giant piece of trash looking back at me". Whilst the "piece of trash" bit took away slightly from the impact, the sentiment was right and stirred up a good crowd reaction. It segment ended slightly anti-climatically as after both men dropped their microphones, General Manager Daniel Bryan came out and booked a match for the main event, when everyone just wanted to see the pair brawl and beat each other up!

Before the next match Tye Dillinger used a distraction from United States Champion AJ Styles to send Baron Corbin out of the ring to the floor. 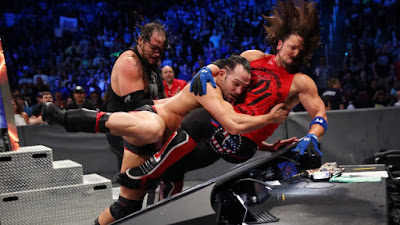 The opening of this one played out on a split-screen with the advert break, which is a strange habit that SmackDown has adopted since going live. It makes it difficult to keep track of anything going on in the match, so I just assumed that nothing of any note happened during that period. Once the bout came back from the break, it wasn't much cop either, as the worked through a series of sloppy sequences that some how managed to be both over and under thought. Dillinger's selling of his back was probably the strongest part of the contest and lead to the best moment of the contest when Corbin managed to escape a Tye Breaker attempt, after the Perfect Ten's back gave out. As usual the commentary team completely missed it. The finish was a little contrived as Corbin splashed water at AJ Styles on commentary, before lobbing Dillinger into Styles, sending the pair over the announce table to take the countout victory. I'm down with a character like Corbin revelling in a cheap countout win, but the whole set-up was overly scripted and a little wooden it's execution.

After the match, Corbin knocked Dillinger to the floor, before being chased off by Styles and then challenging Styles to a United States Championship match at Hell in a Cell. 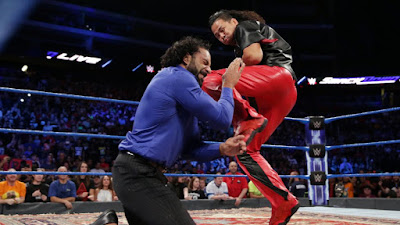 WWE Champion Jinder Mahal continued to show pictures of Shinsuke Nakamura on the screen, only for one to come to life in a moment that should have happened at least a week ago. It was certainly less offensive than in recent weeks and Nakamura finally coming out to get some revenge produced a great reaction and a cool moment for the King of Strong Style. 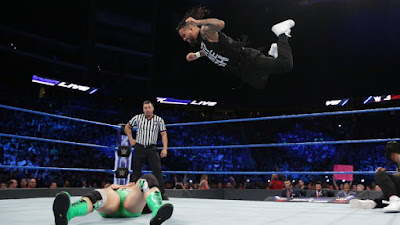 Swift tag bout, with nothing much to talk about beyond the fact that Zack Ryder and Mojo Rawley continue to bicker as a team and the Usos won with a superkick, followed with a superfly splash.

Post-match, The Usos confronted The New Day at ringside, with the Tag Team Champions throwing out a challenge for a match inside Hell in a Cell. Yes daddy! 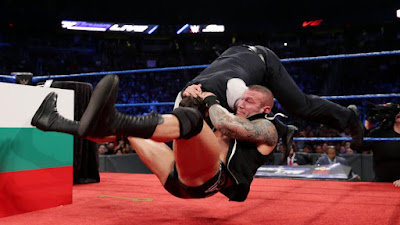 I can imagine that this Pride of Bulgaria celebration wasn't for everyone, but I ended up getting quite a lot of enjoyment from it for a number of reason. Firstly, I thought it was cool to bring Aiden English in to sing the Bulgarian national anthem as Rusev walked to the ring. It made perfect sense for that character to be involved and it allowed English a chance to take part in a segment that he perhaps wouldn't experience on his own, whilst also allowed him to create more heat for himself as well as Rusev. The segment with the "Major of Plovdiv" presenting Rusev with the key to his home city was perhaps a little dated, but it seemed to know that, revelling in it's hokey elements and using them to entertain, as well as garner heat. As opposed to what we've seen with Jinder Mahal, it felt like it was aiming to garner heat from the ridiculous situation of Rusev getting his own day for a cheap win over Randy Orton, rather than solely the fact he was from a different country. The build to Orton's appearance was timed well, so by the time the Viper appeared to RKO English, you knew exactly what was coming and were waiting to see the Viper strike. Rusev took one two and we'd find out later they'd be facing off at Hell in a Cell, here's hoping the pair get the chance to scrub their SummerSlam fiasco from the record books.

Backstage, Sami Zayn asked Daniel Bryan to make sure that Shane McMahon didn't get involved in Zayn's match with Kevin Owens later in the night.

Randy Orton asked Renee Young to tell Rusev that they were going to have a match at Hell in a Cell, before wishing her a Happy Rusev Day. 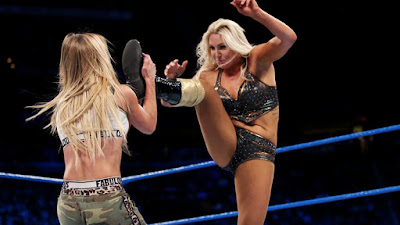 Another match that was split screened with the adverts, meaning that the time listed is a bit skewed (I only ever list screen time) and that I didn't actually see about half of the in-ring action, because ads are shiny and distracting. What I did see was mostly enjoyable action with Flair looking competent as she helped the less-experienced performer to create a couple of nice spots. The match was mostly Carmella, who controlled after some helpful interference from James Ellsworth, as the Money in the Bank holder got a chance to run through some of her offence, including a bronco buster and a tilt-a-whirl headscissors takedown. The only sloppy moment was a transition into a reverse DDT, where the pair seemed to have a moment of miscommunication. The out of nowhere victory for Flair, with a big boot (shit finisher) made her look like a threat to Natalya at any point in their match at Hell in a Cell, whilst also allowed Carmella plenty of opportunity to get herself over ahead of the potential run as Women's Champion that the Money in the Bank briefcase offers.

After the match, Women's Champion Natalya came out told Flair that she was glad her father, Ric Flair, had recovered for illness, because she wanted him to see Natalya beat Flair at Hell in a Cell. 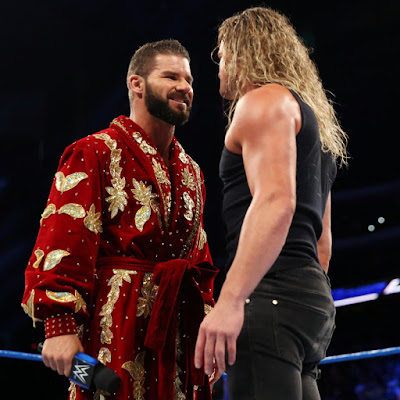 Dolph Ziggler came out dressed as The Undertaker and got a great amount of heat for it as the gimmick finally seemed to click with the audience. This resulted in Bobby Roode finally confronting Ziggler and a match being booked for Hell in a Cell in a fun segment. 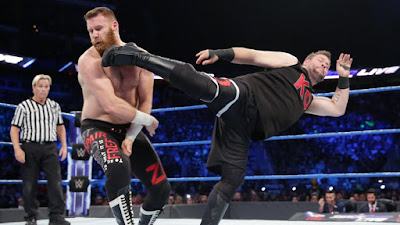 Can you go wrong with Kevin Owens vs. Sami Zayn? The answer is no. Whilst the 11th televised encounter between the two probably won't be remembered as much as their clashes at Battleground or Payback last year, it played a vital role in the feud between Owens and Shane McMahon, with Zayn offering up a nice storyline comparison with which to drive that feud. Most of the in-ring action was classic Owens/Zayn, brawling early doors, fighting from underneath like no other from The Underdog from the Underground and slick reversals. For some reason they decided to do a brainbuster on the apron during the commercial break, but we'll forgive these two that little error. The sequence that stands out in particular saw Owens block a Helluva Kick with a superkick, before Zayn escaped a Pop-Up Powerbomb and countered with a Blue Thunder Bomb, with the action coming at a great pace and elevating the potential threat of the pairs finishing manoeuvres. Also Zayn hit one of the most beautiful and impactful tope con giros that I have ever seen. It was, of course, disappointing to see the bout end by referee stoppage after Owens hit a beasty apron powerbomb, but as part of the ongoing storyline with Shane McMahon, it made perfect sense. It leaves Owens with seven victories of Zayn in WWE and puts to bed the loss Owens suffered to Zayn on RAW in March. I'm interested to see if Zayn is given anymore to do next week in this feud, but am also hoping he can begin to start some stories of his own on the brand and begin to step out of the spot he's occupied since December 2014, Kevin Owens' shadow.


After the referee stoppage, Kevin Owens continued to attack Sami Zayn, wrapping a steel chair around his neck. This brought Shane McMahon out, only for Owens to throw Zayn into McMahon (with the chair still around his head) before legging it up through the crowd. 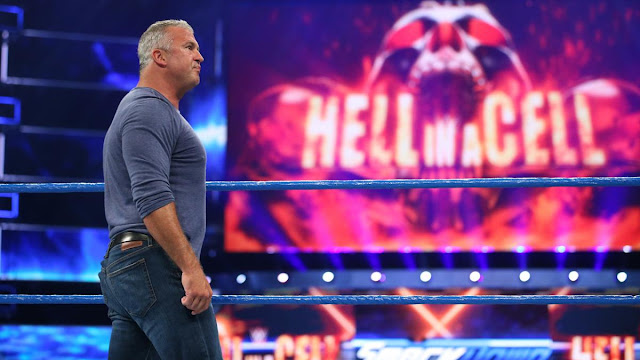 A good episode of SmackDown this week, as we finally got rid of the albatross that was Jinder Mahal's awful promos, whilst the rivalries that had kept the show ticking recently were picked up also. Each storyline seems to be hitting it's stride at the right time with only one episode to go until Hell in a Cell, with stuff like Rusev's celebration providing lots of little entertaining moments and Shane McMahon's issues with Kevin Owens providing some over-arching drive to each episode. The only thing that isn't working for me right now is the Baron Corbin v AJ Styles feud, mainly because it's been awkwardly slammed together and Tye Dillinger has ended up being the real star of the piece.