On 7th September, WWE aired its 264th episode of NXT, taped at Full Sail University, Winter Park, Florida on 23rd August. The show's main event match would see the dastardly Hideo Itami take on the still employed and underused Kassius Ohno in a No Disqualifications Match but the true main event would be Asuka's emotional farewell to NXT after having her never-ending title run cut short by real-life injury. With an undercard formed of Sonya Deville taking on Mae Young Classic competitor Zeda, Lars Sullivan taking on a trio of tiny men & Andrade 'Cien' Almas getting some revenge on Cezar Bononi, it had a lot of potential as an hour of television but as always, was it any good? 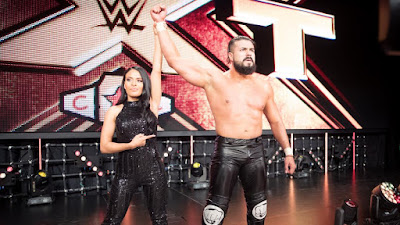 In a rematch from NXT #250, the two lads Lockup to begin with Almas powering the Brazilian to the corner, the ref calls for the break and Almas obliges but hits a thunder slap before stomping out Bononi in the corner, a snapmare takedown into a basement drop kick and more corner stomps follow, Bononi tries to fight back and takes a knee to the head for his effort, the two trade strikes, run the ropes and Almas goes into a pair of big clotheslines from Bononi, punches in the corner, a reverse atomic drop and a drop kick swing things back in Bononi's favour, Almas gets a moment of control and goes for a DDT but Bononi leverages into a pinfall for a 2. Shades of their first match here but Almas regains control with a stiff punch leading to a Rope hung GTR and some forearms in the corner, Almas is about to go for the corner double knees till Vega tells him to destroy him, hits the Hammerlock DDT for the pin. A nice, little match that continues to build Almas and Vega as something of a Latin American Rusev & Lana. The match itself wasn't much more than it needed to be but it was still smooth, hard-hitting and gave Bononi just enough in terms of hope spots to continue to build the big lad. 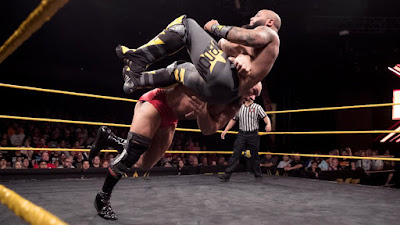 Quick squash m8. Lars is presented with a tag team match but he says no, he wants all the meat, all at once. He immediately double clothesline two of the tiny men before choking the other to the corner and launching him across the ring, he then ragdolls the fuck out of the men throwing them about like (I don't have a reference here, help me, Mauro). After some corner splashes, he hits his big modified Uranage Slam on all three men for the pin. Solid big lad fun and Lars didn't even have to do a... 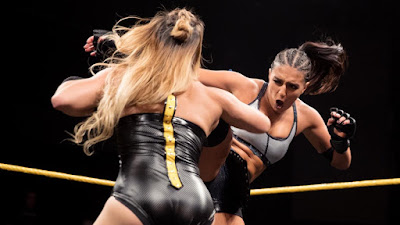 Another quick squash m8. The commentary team put over both women's real combat backgrounds before Sonya Deville puts on about two minutes of controlled waistlocks, interrupted by Zeda leveraging into a pin for a 1 and some running the ropes. Deville gets back to waistlocks, Zeda escapes but runs into a modified spinebuster takedown knocking her out of the ring. Back in and Deville hits a roundhouse, a front strike and locks in a Triangle Choke for the pin. This felt like a faint variation on the match that Zeda and Shayna Baszler had in round one of the Mae Young Classic but Deville looked great & Zeda has such a distinctive look and enough charisma to suggest she's worth keeping around. 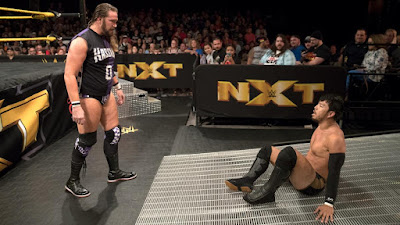 Ohno's gear for the evening has gone for those Neville: Main Roster Debut colours. As the match starts, Itami immediately bails to the floor, Ohno follows, Itami back, Ohno follows again, Itami tries to go for a sneak attack off the rope but Ohno is refusing this and represents a brick wall that Itami runs into. Ohno follows up with a body slam, a leaping leg drop, a slap and a delayed vertical suplex for a 2 count. Running boot, during a second one, Itami reverses and sends Ohno flipping over the rope before taking out Ohno with a running forearm and slamming him into the post. Ohno commits fully to this bump and falls to the outside in a terrifying manner, out of the ring and Itami bashes Ohno off those steps before taunting on his prone arm. Back in the ring and Itami starts on, you guessed it, kicks, all the kicks, into the corner, kicks, hits a hesitation dropkick for a 2 count. Itami heads out to get a chair, slides it into to the ring, goes to pick it up but Ohno grabs it, a tug of war starts which Ohno wins, he throws the chair to Itami before going for a Rolling Elbow but Itami smashes the elbow in question with the chair to send the two lads to an ad break. Back from the ad break and Itami is taunting Ohno with a series of kicks to the head, Ohno begins to hulk up and tells Itami to kick him with his best shot, on his feet and Ohno goes for a big boot but Itami catches it so Ohno hits a leaping boot to the head, another leg drop, a shining wizard and a senton get Kassius back on track, on their feet and Ohno sets up for a neckbreaker but Itami snaps the arm, sets up for a GTS but Ohno slips out and hits his own GTS, a Firemans Carry Into a Rolling Elbow knocking Itami out of the ring. Itami crawls up the ramp away from Ohno who begins kicking a Itami and picks him up for an elbow, he wants Itami to know how much that hurts, a lot from the looks of it, Itami is back up again and Ohno goes for a suplex but Itami reverses into a fisherman's suplex, Itami gets Ohno in the corner and straps the chair to Ohno's face before hitting a shattering hesitation dropkick but takes too long getting to the pin so only gets a 2. He demands respect, Ohno hits a swift right to daze itami, Itami goes for a boot but Ohno catches it, Itami pokes him in the eyes before setting up the GTS, Ohno escapes and hits the low blow to end all low blocks before following up with a Rolling Elbow for the pin. This was some truly glorious nonsense. With less than 10 minutes, the two men manage to create something truly powerful and memorable with Ohno picking up his biggest victory since returning to NXT (yes, even more important than his match with Elias Samson). Credit must also go to Itami who has not only firmly settled into a very satisfying groove with his current heel run but gave the most beautiful performance as a man whose nads are in the most possible pain after that low blow. I can only imagine what could have been done had these two been given 5-10 extra minutes to create chaos. Elbows and kicks probably. 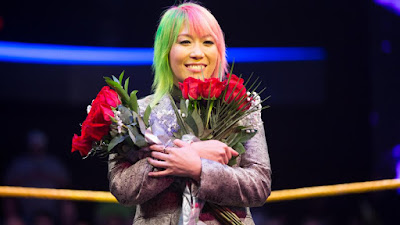 William Regal introduces Asuka who gets a hero's welcome as she comes to the ring in her fly-as-fuck suit. She talks of how she's been in NXT for nearly two years, has fought so many great superstars and loves NXT, she's grown so much and is so grateful for it. Regal talks of how he respects Asuka's determination to constantly defend her title and knows she'll go down in history as one of the greatest champions in WWE history. Others have started to notice how great she is and Regal has been discussing her move up to main roster with Kurt Angle and Daniel Bryan. Regal is sad to see her go but happy to watch the world discover that "no-one is ready for Asuka". The entire locker room come out to join in with the 'Thank You, Asuka" chants as Asuka grabs the mic declaring "you are NXT, I am NXT. Wherever I go, NXT comes with me". The crowd are on their feet. Ember Moon steps forward as her music hit, she goes to the ring, her music dies down and they face off, Moon extends her hand for shaking but as Asuka goes for it, she pulls a move from the Asuka playbook and slides it back before going in for a big, long hug, friendship is fucking beautiful. Finally out comes Triple H with his flowers lackey in tow, he takes her title and trades it for roses before putting over the 'undefeated, women's champion, the empress of tomorrow'. Asuka basks in the crowds adoration as the show goes off. I bet there were more than a few moist eyes in the house and at home during this one. You could say that this segment really undercut the move towards heel-dom that Asuka was taking but the truth is that this was such a show of respect and such an all-encompassing emotional event that it's hard to critique it. Asuka seems to be gone and that makes me sad, not just as someone who reviews NXT because it means I don't get to talk about her anymore but as someone who never really wants her streak to end. Treat her well, Main Roster, she deserves it.


A series of strong angles, some very good in-ring work from Itami, Ohno and Almas as well as the emotional farewell of Asuka led to one of the most cohesive episodes of NXT in a long time. That they were able to fit in so much, at such a breakneck speed and have it not feel overstuffed at only the standard one hour running time was impressive. Now let's watch as all this goodwill and positive momentum is squandered. Andrade Almas for NXT Champion, that is all, goodnight.