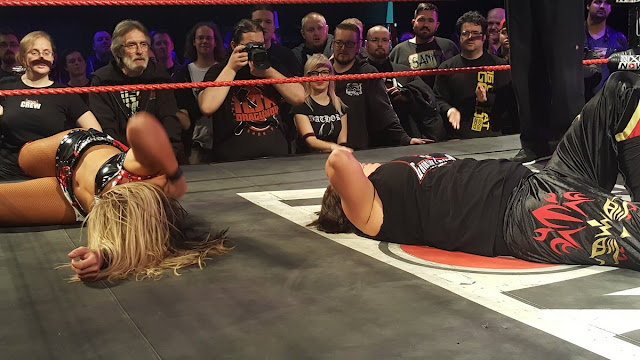 On 7th October 2017, wXw held Femme Fatales 2017 at the Turbinhalle in Oberhausen, North-Rhine Westphalia. The show took the form of a seven-woman knockout tournament, featuring Wesna, Toni Storm, Melanie Gray, Viper, Jinny, Laura di Matteo and Killer Kelly with Wesna receiving a bye to the Semi-Final stage, as well as a non-tournament match between Jaxon Stone and Dirty Dragan. But was it any good live? Lets take a look! 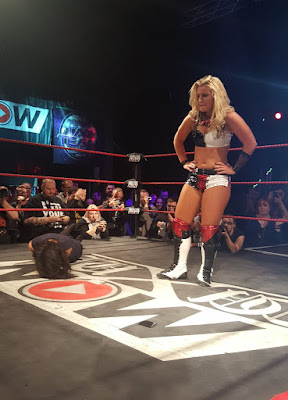 A decent opener, between two familiar opponents, in what turned out to be the strongest bout of the first round. Having faced off previously in WWE, PROGRESS, RevPro and Lucha Forever, it was evident that the pair were more than comfortable in the ring, stringing together a number of neat sequences, aided by clear character definition and the pairs ability to hold a crowd with their personas on both sides of the coin. The action was solid all the way through, with a couple of nice little touches, like Jinny selling the knee after connecting with a knee strike, that elevated the clash, even if there wasn't a particular standout series. The only slice of action that didn't come off quite as well as it could was Jinny's Face Lift (Middle Rope Facebuster), which ended up looking awkward from Storm to take, which in turn meant that the subsequent near fall lost a bit of the power that it might have had the move been performed perfectly. A German suplex and Strong Zero Piledriver put Storm through to a Semi-Final clash with Wesna. 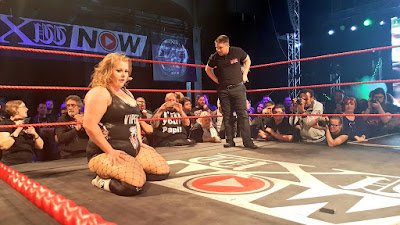 An awful lot of sentons and not much else in all honesty, this bout was too brief to produce anything to get your teeth into. It did however look Viper look like a force to be reckoned with in the tournament, as she withstood a spear through the ropes to take a victory following a powerbomb and Michonoku Driver II. 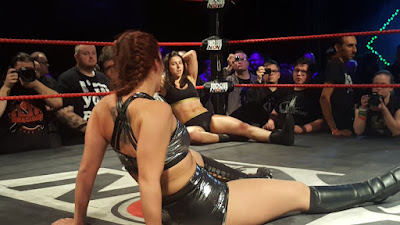 This match was short and pretty uneventful, despite a cool intensity about both performers. I think, the bouts main problem was that neither performer felt differentiated enough from the other, at least from this reviewers vantage points. They both did a lot of MMA style strikes and general jostling, but not a whole lot anything else, with Kelly hitting a German suplex and a missile dropkick from Laura Di Matteo being the only things that I actually noted about the fight. The bouts pacing made it feel like it was going a lot longer than the previous two matches, as the first five minutes was a mash slow strikes, only for the final few seconds to head into a submission victory for LDM, that I actually think I ended up missing, because I was expecting at least another five minutes based on how the ladies had paced the earlier five. 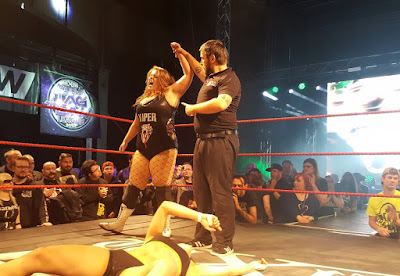 The best match on the show not involving Toni Storm, thanks to a simple story being well-performed. It was hardly a creative classic, but Viper vs. Laura Di Matteo took the Mae Young Classic formula and stuck to it as the power vs. speed narrative came to the forefront once again. Viper dominated LDM throughout, with the smaller competitor unable to knock down the Scot for a good portion. The best work of the bout was based around LDM going for a tornado DDT, with Viper initially able to counter the move into a Northern lights suplex, but moments later after Viper missed a diving senton, a missile dropkick gave the PROGRESS grappler the opportunity to nail the move for a good near fall. This only ended up making Viper like even more of a favourite to walk the tournament as she earned the victory with another Michonoku Driver II to book her place in the final. 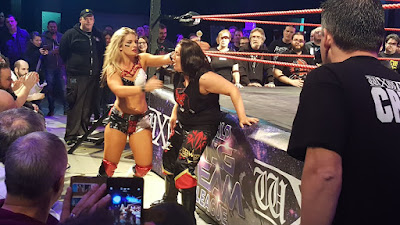 A wild brawl, that grabbed the audience from the get go and came out as the match of the show on the otherside. Big chops and a Toni Storm suicide dive began things as the pair meant to go on, as the 2 time GSW Ladies Champion combined with the current World of Stardom Champion. The melee on the outside was completely different to anything else of the show, with a visceral edge that was hard to look away from as the two went at it on the rows of chairs, ending with a painful looking suplex from Storm onto the hard plastic and metal. The action in the ring was just as good, if not better, with a ferocity behind every move, as Storm attempted multiple times to the Strong Zero piledriver that had seen her advance from Round One. Both got a couple of neat near falls in, with the best coming with Wesna catching Storm on the top rope and nailing a death valley driver, before a well-worked finishing sequence had Wesna initially escape a Strong Zero and get a two count off a sunset flip, only for a Storm headbutt and a snap Strong Zero to see the Aussie through to the final.

Before the final, Jaxon Stone was out and cut an Anti-Women's wrestling promo, before being interrupted by Dirty Dragan, who wanted to fight Stone for the honour of Women's wrestling...it was better than it sounds. 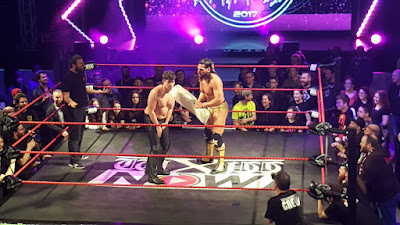 I can see some people really, really not liking this match, partly for being a male match on a female show, partly for being a comedy match and partly because those people are a little bit dull. However, I got a kick out of this as Dirty Dragan and Jaxon Stone wrestled a stereotypical piss-break women's match that wouldn't have been out of place on any WWE PPV in the naughties. Spanking, tripping, ass, more ass, the handstand rana thing in the corner, rolling with the ref, bronco busters and pillows all ended up happening in what was a pretty fun, heavily stylised piece of meta-theatre. The finish featured perhaps the best piece of no-selling in wrestling history with Dragan popping straight back up from a DDT onto a pillow. My main criticism would be that it slightly outstayed its welcome, being the second longest bout on the show to that point (with the previous segment the two probably got more time than anything else on the card). 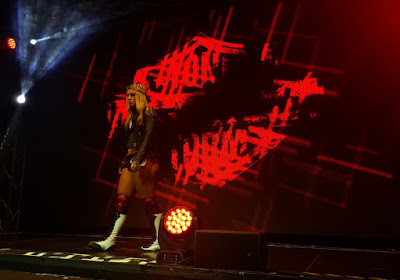 A paint-by-numbers final, that used what had gone before well to create drama, but could have done with another five minutes to tell the story effectively and arguably even longer to have felt like an important tournament final. The match moved logically from one sequence to the next, with the pair working very well together in a crisp and impactful encounter, that bordered on the clinical at times. It was clear that the two were familiar from their clashes in WWE, Stardom, PCW, HOPE and Lucha Forever, with a real syncopated feel, not quite going through the motions, that would be unfair to say, but there was certainly sense that the two had done this match or a variation of it before. Both would get nearfalls of the moves that had won two matches previously, with Viper kicking out of Strong Zero and Storm surviving a Michonoku Driver II, playing well of the tournament setting and the work that had gone in on the rest of the show. Storm's victory came after a flurry of offence out of a fiery back and forth exchange, as ripcord spin kick and diving headbutt were enough to lead to a repeat result of the Mae Young Classic Quarter Final. This was a better match than I've conveyed in the preceding paragraph, I simply wanted more from it. 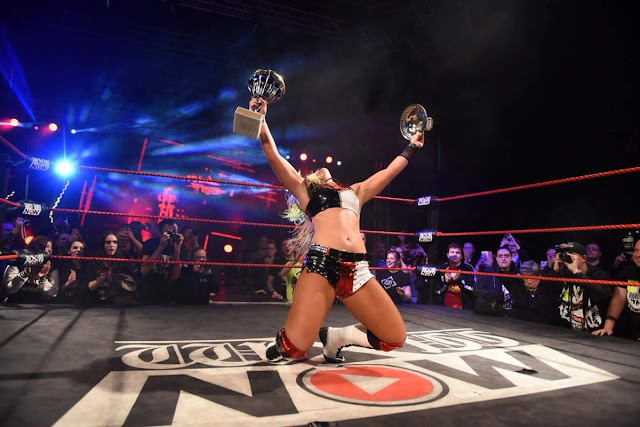 Toni Storm winning this tournament was a fitting result as she was the real standout of the tournament, opening it with energy against Jinny, having the match of the show against Wesna and closing with another chapter of her rivalry with Viper in the final. The 21 year old Aussie is on fire right now, not just in her technical ring work, but also growing in ability to control a crowd with her persona. Not many could come out three times on the same show and own the space as much as Storm did here. The tournament as whole wasn't a must-watch show, the majority of the wrestling was decent, with a few examples on either side of that. I would be interested to see how the women involved in this tournament, especially the likes of Storm, Viper, Wesna and Jinny would have performed had they been given just a little more time to tell their stories and to weave deeper narratives into their bouts and the tournament as a whole. In-Ring the show went less than an hour, which is not enough time for a six match tournament and a non-tournament bout to fully develop, in my opinion.