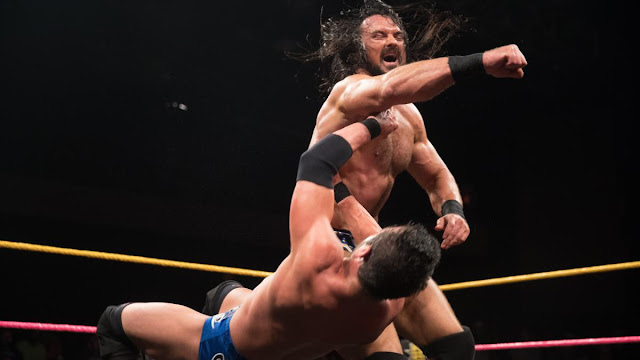 On 5th October 2017, WWE aired its 268th episode of NXT, taped at Full Sail University in Winter Park, Florida on 14th September. We were graced with an NXT Championship match this week as big Drew McIntyre took on on tiny boots Roderick Strong in a rematch from NXT #261. In other rematch news, we also saw the Iconic Duo of Peyton Royce & Billie Kay take on the uneasy partnership of Ruby Riot & Nikki Cross as well as first-time action from Mae Young Classic winner Kairi Sane and Mae Young Classic failed-to-qualifier Aaliyah, but was it any good? 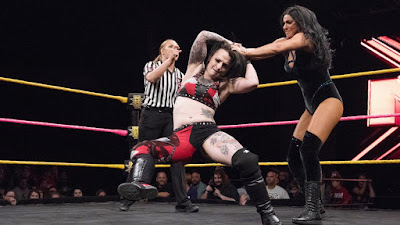 Exactly like the first match these four had, Riot starts off alone leaving us all wondering if Cross is once again going to join the action (from the headline above, you might have guessed, she will) Kay starts for the Iconic Duo, lock-up to begin, Kay takes control, Riot powers out and Kay runs away to tag in Royce, Riot takes down Royce with an arm drag and a slam, Kay tries to use the numbers game but Riot takes her out as well and hits a top rope backwards senton for a 2. Royce scurries over to Kay for a tag, Riot rolls her up for another 2. Riot goes for some kind of rana but Kay slams her down for a 2 of her own. A series of short tags follows as The Duo work over the back, Royce is the legal woman as they hit a double team manoeuvre for the SHOCK ARRIVAL OF NIKKI CROSS. Riot fights back, Royce tags out as Riot powers to her corner for a reluctant tag to Nikki who runs wild over both of the Duo before hitting a reverse DDT for a 2. Royce leaps on Riot and more double teams happen on Cross but Riot makes the save giving Cross a chance to do more mental shit, tag to Riot who hits a double missile dropkick and her Wind-Up Pele Kick finish on Kay for the pin. This was good, the first match was good, this was just as good. Really, though, what did this achieve? It was the same match pretty much except for this time Kay was pinned instead of Royce. So Riot now has two victories over both of them. It feels like this is the same one character beat they've been playing out since Brooklyn. These four are all capable of a lot more, please give them something to do. Someone?

There's a recap of last week's Sullivan v Lorcan match. Lars is in the PC being interviewed after Danny Burch has challenged him. Sullivan responds that the one thing everyone should know is that he is always in control. He says people are afraid of him and they should be. So he accepts the challenge but warns Burch to stay in control of his fear. Big words from a big lad.

Zelina Vega is interviewed about next week’s Gargano vs. Almas match. She runs down Gargano, and says Almas will beat the golden boy again, getting him closer to the NXT Title.

Next up is another NXT debut as Lio Rush takes on Aleister Black. Rush had a little chat on the YouTubes before the show. 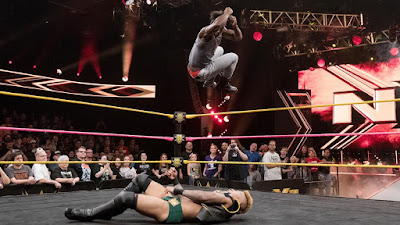 Lio Rush, who if you don't know is a 22 year old recent signee who's only been wrestling three years but is already a two time CZW Wired Champion and a CZW Heavyweight Champion, comes out to a moderate pop of recognition from the crowd, as Aleister Black, who even in the smallest of matches gets a hero's welcome, makes his way to the ring, in comes The Velveteen Dream who begins stomping out (his former partner from MCW where they held the Tag Team Championships) Rush. He hits a clothesline and goes up top and hits a thunderous Purple Rainmaker elbow drop, Black heads towards the ring as Dream gives him a bit of 'come on then', as Black slides in Dream slides out, Black falls into his meditative position, Dream tells him to say his name but Black isn't saying shit, 'acknowledge me, you will say my name' screams Dream to no response from everyone's favourite tatooed Dutchman. While only a short segment, this deserved more than just the bullet point treatment as it not only successfully built towards Dream vs Black at the next TakeOver but played well on our expectations as in the form of O'Reilly and Fish, Black has been responsible for two previous ROH competitors debut TV matches, putting Rush into this position not only gets more heat on Dream as he ruins what could have been a great encounter but also plays well on Dream's own past as well what with the aforementioned Tag Team run, especially worth considering with the third Dusty Rhodes Classic potentially on the way. 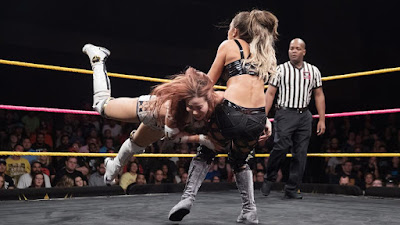 More elbow drops on the way as Kairi Sane's here, I can't remember if Aliyah had an entrance. Lock-up to begin and the two trade standing switches, Sane easily outwrestles Aaliyah and levels her with a rebound forearm strike, Aliyah fights back with kicks and a neck breaker for a 2. She hits a nasty pendulum backbreaker, holding it down for extra wrenching on the back, Sane comes in with knees but misses a spear and hits the post, Aliyah tries to work over Sane but she manages to hit the spear, she lands chops, a corner spear and a basement forearm before she goes up top for the (sigh) Insane Elbow drop for the pin. Perfectly adequate in ring action with Sane treated like a damn star but we really can't keep calling it the Insane Elbow, call it the Ship's Anchor, call it Hoisting the Flag, call it Shiver the Timbers, I don't know, something nautical just make it have something to do with Kairi Sane and not just The Insane Elbow, that's just a shite name. Get your act together, WWE Writing Staff.

Next week: Cross, v Morgan v Royce for a spot in the Women's Title match at TakeOver: WarGames. & The big rematch from what was possibly the best match of TakeOver Brooklyn III as Johnny 'Wrestling' Gargano takes on Andrade 'Cien' Almas. 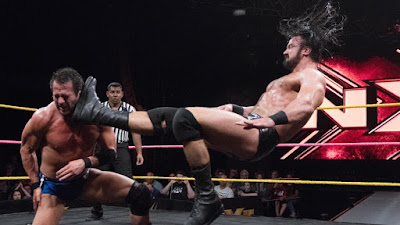 McIntyre takes a knee, it's not clear if in protest or just so that he's not towering over poor, little Roddy for the spotlight shot. Lock-up to begin and to no-one's surprise, McIntyre has the power advantage and ragdolls Strong away, Strong looks to grapple down the big Scotsman but McIntyre shoulder blocks him down to send us off quickly to an ad break. Back from the break and Strong is still trying to control proceedings, he hits a dropkick but McIntyre responds with slaps and a belly-to-belly throw as things head to the outside, McIntyre slams Strong onto the barricade and slaps him some more but Strong retaliates with knee strikes before hitting an apron assisted high knee, McIntyre tries to fight back but takes a backbreaker onto the steel steps for his effort. Back in and Strongs hits a further backbreaker for a 2. He then hits yet another backbreaker for another 2. Strong tries to keep McIntyre down with kicks and stretches but he can't keep big Drew down forever and is slammed to the turnbuckles, McIntyre hits a corner splash and goes up top but Roddy follows with a leaping dropkick hitting Drew in the head from the top rope for a convincing 2 count. Strong once again tries to ground McIntyre but he gets up and they trade strikes, Strong hits a large forearm but McIntyre suplexes him straight into another ad break. Back from the break and McIntyre is hitting boots and throws all over the shop, getting a 2 count off a reverse Alabama slam. McIntyre goes for a Futureshock DDT but Roddy reverses it into an Angle slam, more back-and-forth, McIntyre hits a spinebuster for a 2. Roddy is put up top, he slides out and tries to hit a sunset flip but settles for an enziguri into a suplex for a 2. Back-and-forth leads into a hinted at tiger bomb for a 2, McIntyre responds with a headbutt to take both men down, McIntyre picks up Roddy and takes him to the top for a giant Celtic Cross (it's like an Air Raid Crash, but it's not called that) but Strong gets his foot on the ropes before three. McIntyre goes for the Claymore but Strong puts his educated knees to good use and hits a Sick Kick for another close 2. Strong is taken aback that his special kick wasn't enough, Strong goes for an apronicanrana but is caught into a ringpost bomb, back inside the ring and McIntyre hits the Futureshock DDT but Strong refuses to be dead so McIntyre hits the Claymore for the pin. This was exactly the type of match I hoped McIntyre would be having in NXT. He's so much better when he has an opponent who can work at his speed and when they started sprinting, the action only really let up for the ad breaks. This isn't so much their fault but the booking didn't quite work to convince Strong could take the title as there hasn't been an NXT Men's Singles title change on standard television since Bo Dallas back in 2013. Still, the action came stiff, thick and fast with Strong not losing one iota of credibility in loss but McIntyre gaining so much. As to where he goes from here (*cough* please be Andrade Almas *cough*), let's see...

After the match, McIntyre & Strong would shake hands like the manly man they are. As McIntyre posed in the ring, The Undisputed Era would comfort Strong as he walked up the ramp to the perplexion of Drew. Is Strong going to join the UE? Is this going to be the same plot as AJ Styles & The Club? I still hope not.

Kairi Sane is interviewed about having a Fatal Four Way, she's so happy to be part of NXT, and she's so excited to be the next NXT Womens Champion, bon voyage.

Liv Morgan knows opportunities like this (the Triple Threat next week) don't come around often, she's going to take the momentum of beating Vanessa Borne last week and go on to win that Fatal Four Way.

It will be an odd day when an episode of NXT with a title match that gets to run through two ad breaks and has a nice, clean finish isn't at least a bit satisfying and today is not that day. Up until the title match, everything had a hint of wheels being spun, the undercard matches were strong (it's nice that in a one hour show, NXT has time for two different women's matches. Take note, RAW) but not incredible and the Velveteen Dream-Aleister Black interactions are interesting but unlikely to be remembered as classic segments. Luckily Drew vs Roddy was the kind of match that McIntyre needs to be working with the just over 15m time limit working better for him than a 20m+ ever does. There's some good stuff at work here. Big question though, did Hideo Itami die from that Kassius Ohno low blow? He hasn't been seen since.