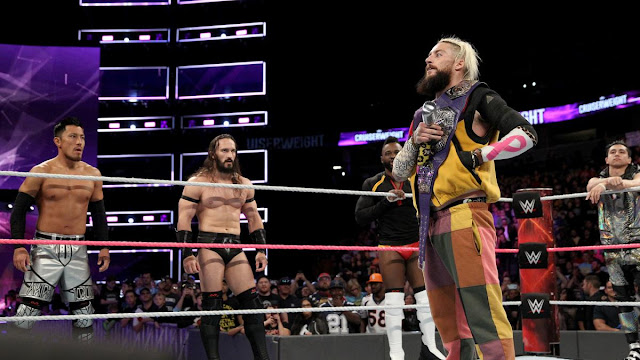 
The show began with the entire RAW roster on the stage as a moments silence was held for the mass shooting in Las Vegas. Our thoughts are with the friends, family and loved ones of anyone involved in this terrible incident. 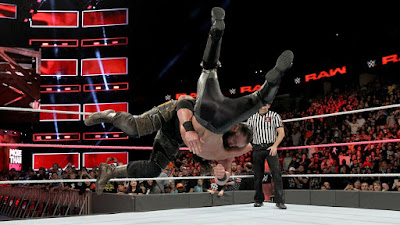 A good strong opening television match here, as Braun Strowman continues to be cemented as the next big star on the RAW brand with a big dominant victory. Similar to last week's match with Dean Ambrose, this was a classic David vs. Goliath style contest, with Rollins fighting from underneath throughout the whole bout, with scrappy offence like an initial slap to the face and doing a good job of selling the beating of the Monster among Men. There was a real simple and solid story told throughout, with Rollins attempting to hit a number of moves, such as a suicide dive and a blockbuster, only to be foiled repeatedly by the larger men. However, when Rollins finally managed to hit two suicide dives and a blockbuster it only resulted in a one count. It probably deserved a bigger reaction than it got, but I got a kick out of that feel of a babyface battling hard to hit some killer offence, only for that killer offence to barely dent their opponent. Strowman, as usual looked like a beast and Rollins looked valiant in defeat against a practically unstoppable Monster, after falling to a big clothesline and a running powerslam.

Backstage, Mickie James bumped into Alicia Fox and Emma, finding out that someone had left gifts of some Depends and a zimmer frame in her lockeroom, after storming to Alexa Bliss' lockeroom, James was met by Nia Jax (despite it being made clear Bliss and Jax weren't friends a few weeks ago) with the two agreeing to a match later tonight.

In his magical rocking chair smoke room, Bray Wyatt rocked back and forth, chuntering about being told to use his hands and saying "She'd never lie to me"

Elias sang a song about Denver and got some good heat, people really love their towns and cities in America. 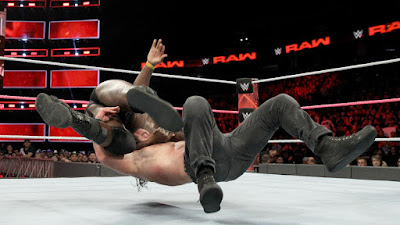 Not a good match, sloppy, awkward and part of a storyline that I couldn't care less about. 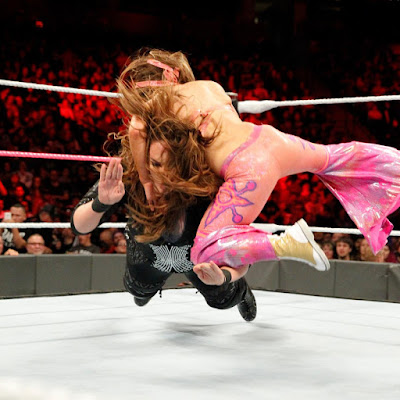 This was one of the worst RAW matches I can remember in quite some time. James looked uncomfortable taking Jax's power offence, which was often sloppy despite being relatively elementary stuff. There was a few times in the match where I'm sure things happened, but I'm not quite sure what those things were, this was mostly down to some awkwardness between the performers, but also at point due to the camera showing Alexa Bliss at ringside instead of what was going on in the ring. The crowd did at least get into the two doing a bit of brawling, but I thought said brawling looked weak and pretty uninspired. The finish saw Alexa Bliss get involved, breaking up a pin after a nasty looking Tornado DDT from James, which really does nothing for anyone involved. I'll give the two the benefit of the doubt because it was their first match together and I've been pretty high on Nia Jax over the last couple of weeks, but they really should've done better in this spot, even with the lame finish.

After the match, James managed to counter Bliss' attack, sending her into the barricade and hitting a rubbish looking Mick Kick.

Renee Young attempted to interview Cruiserweight Champion Enzo Amore, but he had nothing to say and just looked around a bit and blinked.

Everyone wanted to congratulate Mickie James on her "victory" with General Manager Kurt Angle booking her in a Women's Championship match against Alexa Bliss at Tables,
Ladders and Chairs. 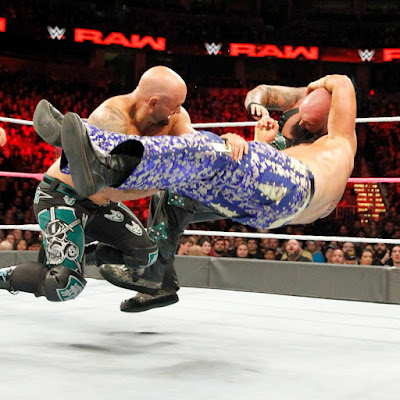 A nothing match, that went a little too long, but at least the regular tag team in Luke Gallows & Karl Anderson picked up the victory. It's probably harsh to call this a nothing match, actually, because there was some nice tag team work here from Gallows & Anderson, with blind tags and double teams and Matt Hardy's hot tag was quite fun, but there was very little story or reason behind this match taking place and no real reason to care. That's exactly what the crowd did for most of the match, they didn't care. They woke up slightly for the Hardy hot tag but for the other six or seven minutes of that bout, Denver remained pretty much silent. Following Hardy & Jordan's match against The Miztourage last week, this really could have done with some kind of story development and whilst there's an interesting story to be told in Jordan trying to replace Jeff Hardy, if WWE wanted to put him in a tag team, he was already in a really good one a few months ago in American Alpha.

Roman Reigns spoke to Charly Caruso about the situation with Seth Rollins and Dean Ambrose earlier on, which seemed to point towards a Shield reunion being imminent, he also said something about his Intercontinental title bout with The Miz later on. 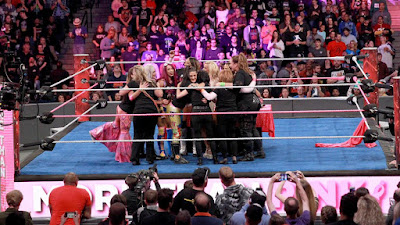 As part of WWE's partnership with Susan G. Kommen, Dana Warrior presented three breast cancer survivors with pink versions of the Women's Championship, with the whole Women's roster in the ring. It was all rather lovely and ended with everyone hugging.

Before the next match, Roman Reigns nailed the Miztourage with a pair of Superman punches, followed up with a Drive by to Curtis Axel, sending Bo Dallas into the steel steps, before going through the crowd and up onto the stage and taking a steel chair to both men numerous times. A nice piece of storytelling here with Reigns looking to make the match one on one and remove the potential ringside threat.

Roman Reigns def. The Miz via Disqualification, The Miz retains the Intercontinental Championship (7:39) 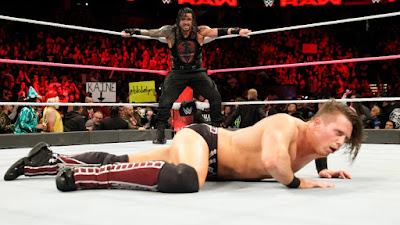 This was another match that I struggled to get into and after really enjoying the pairs non-title match last week, that was a little disappointing. I think, most of that comes from Reigns taking Axel and Dallas out of the picture before the match and whilst I enjoyed that pre-match angle, I feel like it ended up taking away potential story elements, that had worked really well last week. It also appeared that Reigns had recovered from his rib injury, or at least he didn't sell having a rib injury, so there was another element gone. I understand the need to keep things fresh and to avoid being repetitive, but there's was nothing in this match that took the place of those things, in terms of narrative, so what we were left with was two guys who went through the motions for seven minutes before the DQ finish. Miz trying to get a countout win was a nice touch and the near fall from a Skull Crushing Finale was probably the highlight, but even that felt oddly time only six minutes in, so ended up lacking the impact it would have had, had it came five or six minutes later in the bout. The finish, where Reigns was setting up Miz for a spear, only for Sheamus & Cesaro to appear and drag Reigns out the ring, was what it was, a TV finish to set up a larger angle afterwards.

A post-match angle saw Roman Reigns take a Neutralizer from Cesaro, a Brogue Kick from Sheamus and a Skull Crushing Finale from The Miz, before the trio would return to the ring mimicking The Shield, hit a Triple Powerbomb and then pull out the traditional Shield fist-bump. I'm so behind the way this Shield reunion has been built to over the last few months and there's huge potential in having a Shield v Miz, Cesaro & Sheamus match at TLC, the event where The Shield had their in-ring debut almost five years ago! 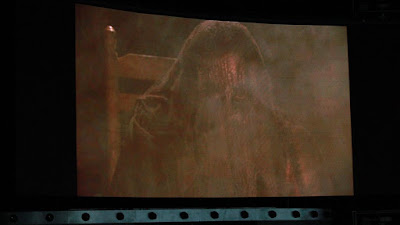 So this feud is still going on and whilst they added a new dimension to it this week, it's hard to get excited about a storyline that's been on and off since just after WrestleMania. Finn Balor's promo wasn't bad, but his "Don't sing it Bray, bring it" line was an awful, awful line and Bray Wyatt's included the Eater of Worlds rambling on about the demon or something and then revealing Sister Abigail is alive "and she's dying to meet you", before concluding with a creepy effect and Bray laughing. 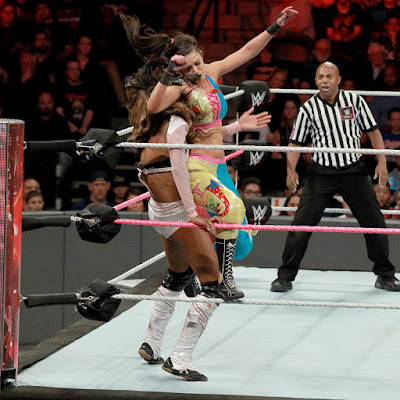 I'll go out on a limb and say this was the best match on the show. A well put together tag team match, with some lovely flowing wrestling, strong character work and story development, the only thing the match was really missing in it's spot was a high tempo gear change that could have taken it to the next level. I was super impressed with Alicia Fox in this one, especially considering she hadn't wrestled on RAW since early August and hadn't been in any kind of match for a month. Beyond one slightly awkward sequence with Sasha Banks, Fox was crisp and energetic, hitting a nice dropkick to knock Banks off the apron as well as a lovely tilt-a-whirl backbreaker on Sasha in a well-timed cut off. The match made use of a number of tag team wrestling clichés, but also all four bought lots of little touches that made the match. Banks and Bayley having fun as a team at the start, Banks' selling in a headlock and Fox grinding the forearm, Bayley selling her neck at ringside after taking multiple forearms from Emma, as well as The Hugger getting the crowd worked up well whilst on the apron, all came together to make a rather cute compact TV bout. The finish with Emma walking out on Fox is an intriguing one and I'm looking forward to seeing where it plays out and where this non-title women's storyline is going. 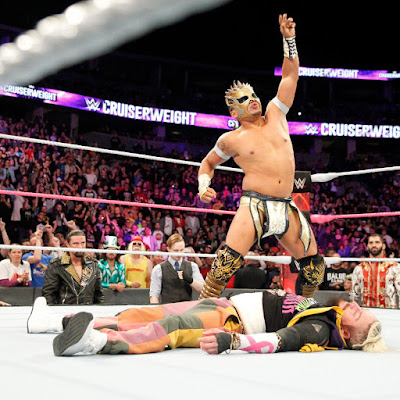 Nearly ten minutes of Enzo Amore talking. This was both glorious and excruciating at the same time. This is because Amore/his character genuinely gets under my skin and here I ended up finding myself becoming angry at his mere existence, but I'm also fully aware that that's now the reaction that he's going for. He's not pussy footing around it, he's going out there to be as dislikeable as possible, wearing even more ridiculous outfits, he's running down a roster of talented performers and trying to get them fired, he's talking quickly and saying things that don't make sense, he repeatedly reminds the audience that he's hurt and he's just a tart. While there was some going over old ground with his promo from last week's 205 Live, Enzo's facials, vocals, body language and a whole lot more was spot on throughout and there's a delightful blurring of fiction and reality, that's tying it all together.

Once Amore had taken the piss out of each of the Cruiserweights who turned up ringside (including Ariya Daivari, which made literally no sense after last week's 205 Live, although it seemed like that episode was retconned anyway), Kurt Angle interrupted to introduce the new Cruiserweight, someone who could touch Amore and someone who could still challenge for the Cruiserweight title, Kalisto. Obviously, the show closed with Amore on his back after taking spike rana and Salida del Sol and Kalisto and the whole division going nuts. Let's be honest, it's been baffling that Kalisto hasn't been put in the Cruiserweight division til now and while he's yet to show his full potential under the WWE banner, the purple ropes is somewhere he can really shine, perhaps not in the ring with Enzo Amore though.

The show closes with Roman Reigns sitting injured backstage, being approached by Dean Ambrose and then Seth Rollins, before both men eventually walk off without doing the Shield fist bump. An electric backstage segment to close the show with all three men taking their time, letting the moment breath and the crowd going absolutely nuts for every little details. 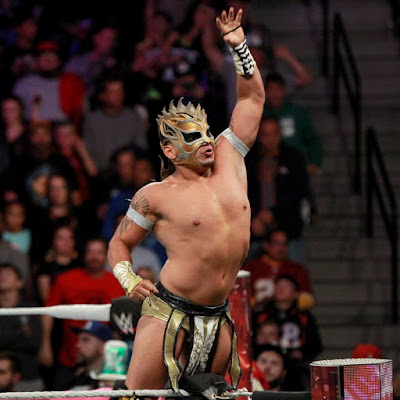