The Best of Times, The Worst of Times // Survivor Series

Consider this dear reader: Survivor Series- the second major PPV concept created by Vince McMahon- has been a thing for 30 years now. It’s so old it should by this stage of its existence have a career, be in a long term relationship and at least be thinking about kids. Basically, Survivor Series is a full-blown grown-up, wrestling with the realities of adult life, ready to put a misspent youth behind it. But let’s not consign said youth to the dungeons of the past just yet: its formative years offered much to celebrate as well as some seedy and unfortunate nights it would probably rather forget. So here it is: the best and the worst of Survivor Series. But rather than starting with the matches, let us begin with something for which this event is synonymous: debut performances. 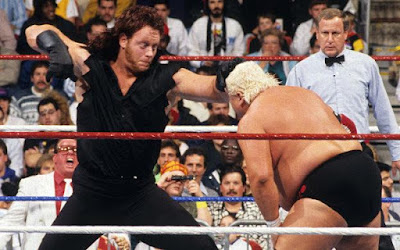 As was aforementioned, the Survivor Series is an event renowned for a big debut: The Rock, Kurt Angle, Sting and eh, Steve Blackman but none was bigger than that of the Deadman himself. Accompanied by Brother Love and serving as the surprise member of the Million Dollar Team, he made an instant impact, eliminating Hall of Famers Koko B. Ware and Dusty Rhodes before exiting the match himself via count out. In many respects this was the perfect setting to bring in the Undertaker: alongside colourful acts such as The Honky Tonk Man and Messers Ware and Rhodes, his direct, calculated ring style and fearsome look was greatly enhanced and his status as the antidote to the cute, cuddly characters of the era was confirmed. Yes, he was cartoony but in his own distinct manner. This was no Adam West; this was 1980s Frank Miller Batman: cool, cold, iconic. 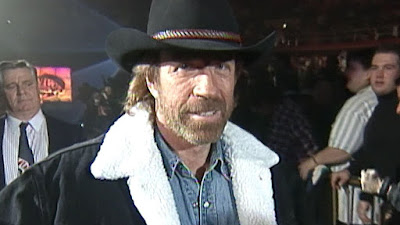 Okay, I’m cheating a bit here but let’s go with it. Technically his role as ringside enforcer in the Undertaker vs Yozozuna Casket match was a debut for Chuck Norris in the WWF so it kind of counts. Now, Chuck Norris wasn’t as cool in 1994 as he is now: these were the days of the long forgotten Walker, Texas Ranger; there had yet to be any Chuck Norris facts; he hadn’t yet been immortalised in Dodgeball. However, he was still enough of a straight to video action movie badass that I expected high drama of the violent variety. Surely he would kick someone’s face off, maybe fire a bazooka at the casket? Sadly no: while Double J did eat a kick from Norris, his face remained intact. And while Norris was distracted at ringside, IRS interfered in the match anyway. Poor show, Mr Norris, poor show. 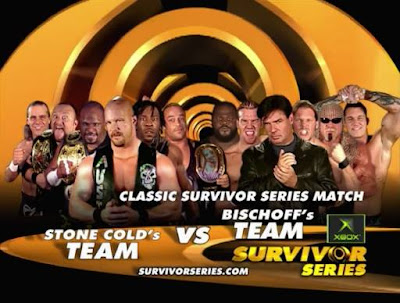 10 men competed here: Randy Orton, Chris Jericho, Christian, Scott Steiner and Mark Henry representing GM Bischoff and Shawn Michaels, The Dudleys, RVD and Booker T fighting for Sheriff Austin (that’s right, he was a sheriff back then). However, whilst all worked hard, this was ultimately a one man show: The Heartbreak Kid delivered a GOAT worthy performance, selling to a level seldom seen today, masterfully teasing comebacks that built the audience’s expectations before finally succumbing to the rising star Orton. I recommend that you fire up your Network if you haven’t seen this for a few years: an undoubted classic. 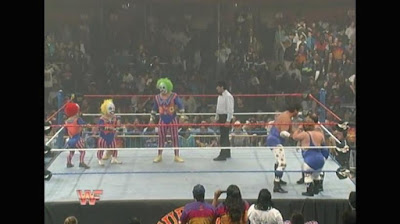 When I started to love wrestling, I was already an 11 year old. Essentially, I was getting into WWF at the point most of my friends were starting to outgrow it. That fact didn’t bother me but I was determined to get my dad to accept wrestling as a credible pastime; this was an uphill battle. He didn’t see it as a sport: more of a pantomime.

On one family jaunt to Blackpool, seeking a respite from the lights and sugar charged children, he slipped into a pub one afternoon. Knowing full well that WWF Wrestling Challenge would be on Sky Sports at that exact time, I asked him to check a result for me (a title match between Bret vs Owen if memory serves). What he reported when he returned from the pub was not the result of a Hart family athletic showcase that fostered an undying love of the graps game: now, he told a tale of three little clowns running around and falling over in the ring while a big clown squirted water in the face of a hapless interviewer. I could hear the disgust in his voice. With this Doink the Clown monstrosity, I had lost him forever.

A couple of weeks later, this angle culminated in a match in San Antonio, Texas. Doink and Jerry Lawler did some bad wrestling and then 6 little people did some even worse wrestling. Forget my dad, this abomination nearly put me off wrestling for life. 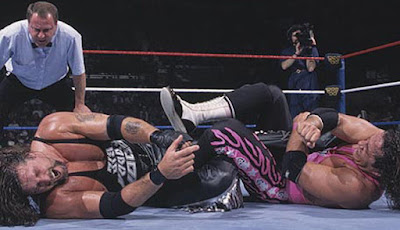 Legend has it that Bret Hart was frustrated that this match didn’t get the credit it deserved: from Vince McMahon, from Dave Meltzer, from everyone really. It is one of only two great matches Kevin Nash would enjoy in the WWF/E and credit must go to the Hit-Man here: from his (at the time) innovative commentary table bump to the ingenious finish- playing possum to hit an inside cradle- this match had the audience leaping out of their seats in astonishment. This praise may be a bit late for Bret but better late than never: this was WWF story-telling at its finest and a slice of action worthy of inclusion on a greatest hits list.

Honourable mention: Undertaker vs Batista for the World Title in Hell in a Cell (2007) 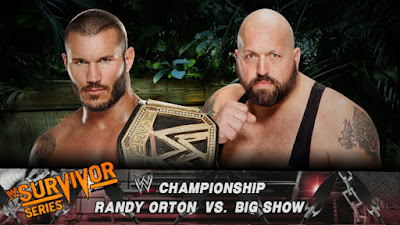 I honestly don’t know why they bothered with this match. The build-up was more focused on Big Show’s interactions with Hunter and Steph, undermining Orton in front of a crowd already pining for Daniel Bryan. Inevitably the Universe got bored and turned on the contest; usually, that annoys me but given this listless action, it was kind of understandable.  Orton, as he sometimes does with vocal crowds, got flustered, Show lacked the baby face chops to steady the ship and the sloppy finish capped this mess off fittingly. A boring match to end a dull feud on a painfully average PPV: this was WWE story telling at its worst. 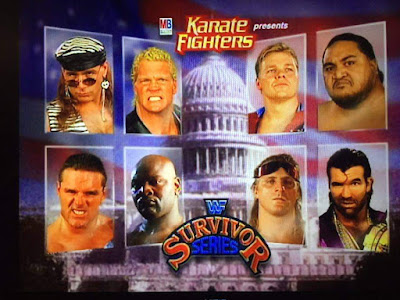 I debated this one intensely and my final pick may well split the room but I really love Survivor Series 1995. I’ve already laid bare my love of the main event but the show has a bit of everything: it has decent work rate, most notably in the opening exchanges between 1-2-3 Kid and Marty Jannetty and Hakushi; it has Japanese women’s wrestling playing to the sounds of a highly confused Vince McMahon; it has the Wild Card match in which faces and heels team together (a novel concept for the era);and it has a first rate Bill Clinton impersonator who gets the line of the night (after Bill is made to jump by some pyro, Todd Pettengill comments he seems nervy: Clinton shoots back “you would too if you lived in my neighbourhood”). Possibly my favourite thing about this show is also the worst match on the card: to tussle with King Mabel’s hodgepodge of royalty themed heels, Undertaker forms the weirdest Survivor Series team of all time: Henry Godwinn, Savio Vega, Fatu. Mark Callaway basically rounded up his drinking buddies (brilliantly named the Bone Street Krew) and went to war as the most diverse collection of gimmicks ever assembled in one squad. And they won with a clean sweep. I bet the beers tasted good that night. 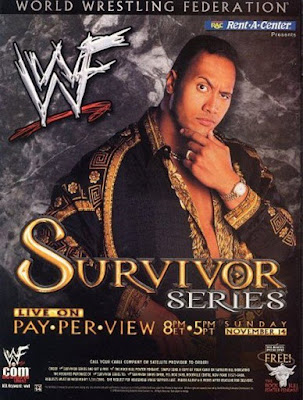 An oft-forgotten truth of the Attitude era is that while the weekly TV shows were excellent, the PPVs could really suck. And this one sucked something powerful. It is best remembered for two things (and when one of the Survivor Series teams was British Bulldog and the Mean Street Posse you can be forgiven for wanting to forget the remainder). The first, is the debut of Kurt Angle who wrestled a match that was, by design, dull. His initial gimmick was to bore the crowd through a combo of technical wrestling and morality (never of which were too common in late 90s WWF) and whilst his evolution was swift and exciting, some of his early weeks were trying, most notably this one. That, however, was not the low point of the show. That dubious distinction belonged to an ill-judged angle, an unadvertised main event and a hot-shot title change.

The hit and run on Stone Cold was poor on first viewing: it took the industry’s biggest star out of a heavily hyped match up and in did so in a rather lacklustre fashion: we’d all seen Austin get into mischief with cars dozens of times by this point so it lost points for imagination. On second viewing, with the knowledge that the driver was Rikishi, working on instruction from Triple H, well, let’s just say I was glad I’d given up on trying getting my old man into this. To confound matters further, the Fed injected a lukewarm Big Show into the mix and ended up putting the title on him: his win, on the back of a bizarre storyline about his dead father, was supposedly meant to be a joyous moment: the subdued pop that followed the pin spoke to an audience that had come to see Austin and were left with a teary giant.