The Best of Times, The Worst of Times // Triple H 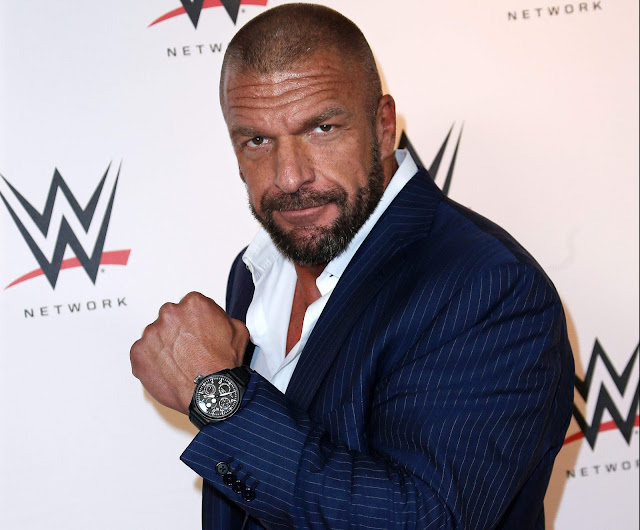 WWE likes to use the term polarising as a positive. For years, the announce team have used this term to describe John Cena’s mixed reactions as something to be celebrated; the same approach has since been adopted for Roman Reigns. But while both Cena and Reigns certainly draw juxtaposing responses from the live crowd, when it comes to truly polarising the fan base, Triple H really is the king of kings.

To some fans, Hunter is a legendary performer and the rightful heir apparent to the WWE. For the hardcore fans, NXT, his baby, is arguably the second most beloved brand in wrestling, lagging behind only NJPW, and his recent masterstroke, reviving the War Games and filling it with ROH alumni, is testament to his ability to marry wrestling traditions with modern independent stylings. However, to others, NXT’s success glosses over his reoccurring character flaws. To some, he will always be the ultimate politician, a performer who never really matched up to the true greats and an opportunist who married the boss’ daughter, in the process forcing his way into writing meetings so that he could bury his potential opponents (his recent defeat of Jinder Mahal in India raised more eyebrows than his post-match dancing). Whichever side of the fence you fall on, one thing is for sure: when the history books are written for the WWE, Triple H will justify more than a few chapters… 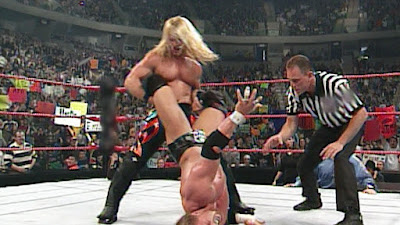 This remains one of the best matches in the (near) 25 year history of Monday Night Raw and may be the most fun match of both men’s WWE runs. Triple H has had fiercer brawls and more epic struggles of endurance but this contest was an example of what an on-point WWF/E do better than anyone else: build in a supporting cast of characters (here it was Shane and Stephanie McMahon, the APA and Earl Hebner) to present a logical yet unpredictable story. As the action intensified and the red hot State College crowd began to believe in Y2J, a ref bump triggered scenes of madness: a false finish was followed up by Triple H and Hebner physically getting into it, the distraction allowing Jericho to score the pin. The count seemed a little fast but it had reason to be: an enraged Hebner had just cause to screw Hunter. When the McMahon-Helmsley regime reviewed the footage, they immediately demanded the result be overturned which led to another entertaining segment between Hunter and Hebner. This finish might have seemed a cop-out in different circumstances but here, it played into the story perfectly and set the wheels in motion for a summer long feud. 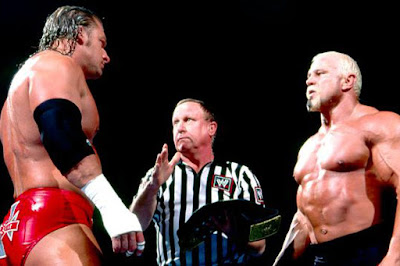 Nearly fifteen years later, this remains a huge disappointment and it was the lowest ebb in what was, arguably, Hunter’s most dissatisfying year in the business. Having been one of the most believable and engaging acts in the dying days of WCW, the signing of Scott Steiner seemed like a real coup for the WWE.  Big Poppa Pump was over like Rover, still looked like a million bucks and seemed tailor made to tangle with Triple H: his reputation would surely guarantee hard-hitting, competitive matches, right? Nope: these two didn’t click on any level. Steiner blew up early and while Triple H fared better with regard to stamina, he still wasn’t able to mask his opponent’s shortcomings. Their exchanges were ugly, the match was sloppy and the non-finish was insulting. The rematch a month later was another pointless exercise; this time, Hunter derailed the Big Booty Daddy’s hype train by pinning him in the middle of the ring. Three months after rocking Madison Square Garden on his debut, Steiner was finished while Triple H’s reputation for burials gathered pace.

Honourable mentions: vs  Henry Godwin (In Your House 5); vs Randy Orton (WrestleMania 25) 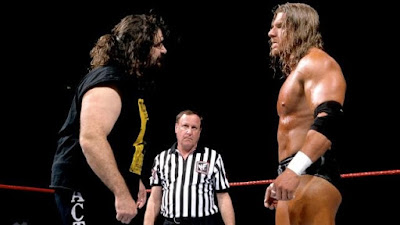 Not once, but twice, did Mick Foley play a significant role in giving Hunter a leg up the card. Back in 1997, Mankind’s star was rising while Hunter Hearst Helmsley was firmly entrenched in the mid-card.  Indeed, when Hunter won the King of the Ring it was somewhat of an upset: true, he had been earmarked for the crown a year earlier but the build to this event had been all about Foley. However, the hard-hitting nature of this match meant that both men got over and subsequent brawls at Canadian Stampede, Summerslam and on Monday Night Raw saw Triple H face off against Mankind, Dude Love and Cactus Jack in consistently excellent outings. His reputation enhanced by the Foley programme, by the year’s end Hunter was ready to be elevated and paired with Shawn Michaels: D-X was born.

A few years later, Hunter was close to the Promised Land: having risen up the mid-card and having captured the WWF title (from, you guessed it, Mick Foley), he was so close to being the man. However, he needed a statement victory to obtain that alpha male status: at this point, his wins had been tainted; he needed to pin a star cleanly and convincingly. That star was Cactus Jack: first at the Royal Rumble and then inside Hell in a Cell, Foley bumped and bled for the cause, doing clean jobs that transformed Hunter from competent heel to bad ass main eventer. Triple H was a made-man and it was Foley, more than any other, who made him.

A footnote here: there are rumours that Hunter was always quick to badmouth Foley backstage, undermining his contributions to the industry. I was lucky enough to attend the Hall of Fame in MSG in 2013: the night when Foley was inducted. As the show came to an end and the cameras stopped rolling, I noticed Hunter make a point of reaching over to Foley to shake his hand. In the same building in which Cactus Jack and Triple H had waged war their mutual respect seemed genuine. 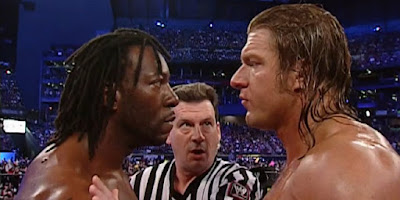 The programme with Booker epitomised the very worst of Hunter’s career: the predominance of bad taste segments (the racial overtones of "Somebody like you…doesn't get to be a world champion" went beyond wrestling heat); the insistence in proving WWE superiority over WCW (watch Triple H’s slow motion cover following his one pedigree: seemingly there was no directive for Booker to look strong here) and the lack of clear resolution (this was their only title match: the vanquished challenger never got his redemption). Their brief feud in 2007 wasn’t as offensive but was as damaging: after successfully portraying a King for a year, Booker T had secured a main event spot. But when the King of Kings returned at Summerslam, it was clear who the true King was. Again, a lack of competitiveness in the bout spoke volumes about. Booker didn’t hang around for the trilogy; he soon left for TNA. 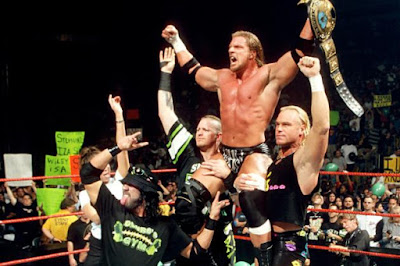 After defeating The Big Show on an episode of Monday Night Raw, Triple H kicked off a title run that saw him truly cement himself as the best wrestler in North America at the time. His aforementioned feud with Mick Foley was the pinnacle of his reign but he had many more great bouts: a generous performance in a Smackdown battle with Rikishi was a real coming out party for the former Fatu; a Raw title match with The Rock and The Big Show was electric; and while the main event of Wrestlemania 16 was a tad disappointing, his Backlash encounter with The Great One was superb. For four months, this game really was all about Triple H. 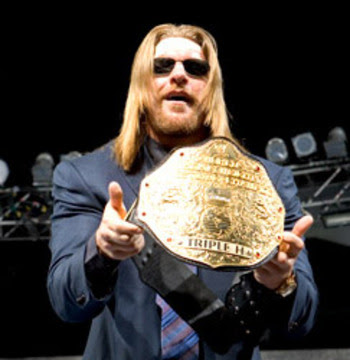 In these ten months, Triple H didn’t achieve half of what he had managed in four back in 2000. The reign started with an underwhelming win over Shawn Michaels at Armageddon: for a match with ladders and flaming barbed wire bats, it was rather average. His series’ with Steiner and Booker have been documented while a feud with Kevin Nash was ordinary. The Goldberg programme had promise but again never really sparked to life: at Summerslam, big Bill’s coronation was senselessly delayed until the next PPV, with a potentially memorable moment stolen from the masses. The subsequent match at Unforgiven was saddled with a stipulation that telegraphed the finish: should Goldberg lose, he would have to retire. At one point, Hunter even put a cash bounty on Goldberg’s head! Unquestionably, in booking and execution, this whole contest was very 1970s. Indeed, that was the crux of the problem for Hunter here: he had stopped being himself and had instead morphed into a Ric Flair/ Harley Race tribute act. Triple H rose to prominence in the Attitude era; lazily reviving NWA tropes in the noughties wasn’t going to cut it. 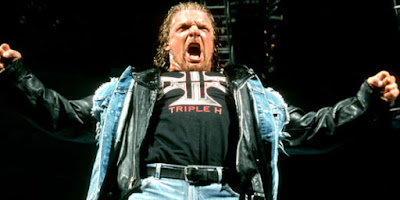 I was at university in January, 2002 and I remember this night vividly. Our regular Friday night routine was to hit the student union, represent on the dance floor until 2am and then head home, kebab in hand, for the late night/early morning repeat of Raw on Sky Sports. This night, we literally ran home, kebab still in hand, shouting excitedly at passers-by that tonight was the night Triple H was returning! Some people even returned our drunken proclamations with high fives: that’s how over Trips was then!

His return, after 7 months out nursing his blown quad, was truly a momentous moment. His pop, described by some as the loudest sustained cheer in MSG history, served as a reminder of how good he had been in the 18 months prior to his injury. This was Triple H at the height of his powers. And his cut-off denim jacket was as cool as shit. 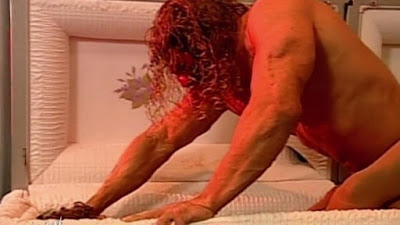 There have been enough words written over this angle to last a lifetime: a recent Something to Wrestle Podcast addressed this detestable train wreck and it was revealed, to Hunter’s credit, that he at least tried to convince Vince that this was a very bad idea. Of course, his words fell on deaf ears and an attempt to court controversy amongst the mainstream merely bemused his loyal audience. Its best summed up by an exchange that occurred on air between GM Eric Bischoff and Shawn Michaels in December of that year: when Michaels referenced Vick with disdain, Bischoff asked “Does that offend you as a Christian, Shawn?”

Michaels replied: “No Eric. It offends me as a wrestling fan”.