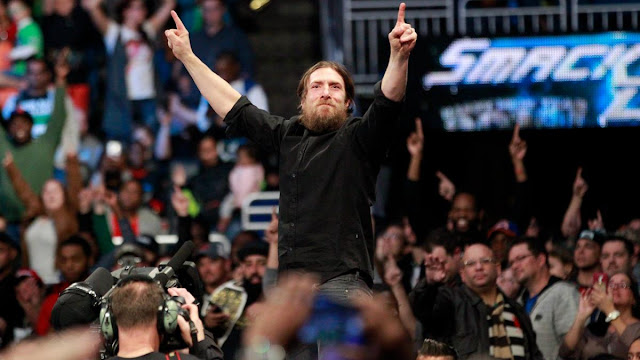 It was the first SmackDown of 2018, so it was bound to be freaking amazing, right? WWE lined up a main event featuring WWE Champion AJ Styles taking on Sami Zayn whilst Kevin Owens, Shane McMahon and Daniel Bryan hung out at ringside. The episode also saw the return of Becky Lynch, as she joined SmackDown Women's Champion Charlotte Flair and Naomi in confronting The Riott Squad, following their match with The Welcoming Committee. Shelton Benjamin & Chad Gable, Xavier Woods, The Bludgeon Brother, Breezango and The Usos were all also featured.

Let's talk a look, pals and see how it all went down at the Amway Center in Orlando. 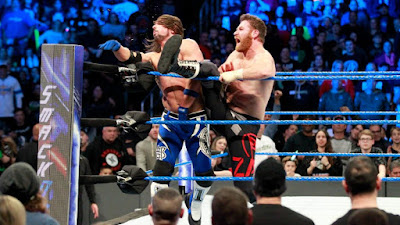 Rightio, this storyline is getting old already and following how the show ended I'm not sure that it can recover. More on that in a moment. Firstly, lets talk about the opening segment, as AJ Styles kicked the show off, before being joined by General Manager Daniel Bryan and Commissioner Shane McMahon. This was a convoluted way of getting Bryan and McMahon to be ringside for the main event between AJ Styles and Sami Zayn later on. McMahon was worried that Bryan would allow Kevin Owens to be ringside for the match, so instead of just banning Owens from ringside himself (because he's Bryan's boss and surely that means Bryan can't overturn his decisions), McMahon said he'd be at ringside and Bryan said he'd be there too. The only thing that I kinda dug about the segment was McMahon asking Bryan a question and then cutting off the answer by saying "I wasn't finished talking", because I thought it was a cool way to show the development in their relationship and actually showed a little bit of thought behind it.

I think my main issue with this storyline is that it is being hilariously over-booked for the wrestler that are actually involved directly in it. AJ Styles and Sami Zayn have the ability to put on a really good television match (see their April 2016 RAW match for details), whilst also having the ability to carry an interesting storyline. With Kevin Owens thrown into the mix, this should be a no-brainer. Yet, the match ended up being just alright, showing flashes of what the pair can do together, but being constantly undermined by whatever is going on between Shane McMahon and Daniel Bryan at ringside meant that they didn't get reach even half of the level that you would expect. A couple of nice near falls for each man and great little sequence with Zayn getting caught in the Calf Crusher after Styles ducked a Helluva Kick meant that this wasn't a complete waste of time, however. The finish featured much fannying around as McMahon tried to get Owens removed from ringside and Bryan tried to do the same to Shane, before Zayn picked up the win with a Helluva Kick after Styles had knocked Owens off the apron. I was pretty buzzed that Zayn had picked up such a big win, but man, the finish was lame.

The post-match stuff somehow manage to get more over-complicated. A furious Styles got the mic and demanded a match with both Owens and Zayn, with Bryan booking a Handicap match for the Royal Rumble, with the WWE Championship on the line. Like what is happening here? Has Bryan turned heel now? He was pretty buzzing to book the match and then started yesing like fuck all over the announce table. Who thought this was a good idea? Is this happening? Surely, Shane is the villain here? Why are we having this feud at all? I have so many questions and not in a "Man, I can't wait to find out the answer to these questions on next week's SmackDown LIVE" kind of way. Less of this please. 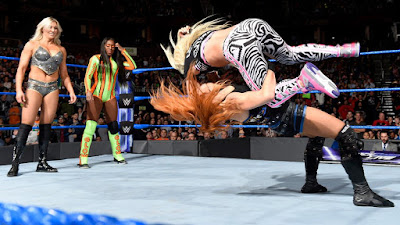 Before the return of Becky Lynch, the Riott Squad vs. The Welcoming Commitee featured some more confusing booking, as it played out in front of a dead crowd. I suppose the match itself wasn't that confusing, but more the fact it was taking place in the first place, without any clear character shift for either Natalya, Carmella or Tamina. Two heel trios facing off didn't really do anything for anyone and I quickly found myself drifting from the contest, especially when it continued through the commercials (American adverts are very distracting). There was a nice exchange between Liv Morgan and Natalya at the very beginning and Sarah Logan's new Kentucky Knee finisher is pretty sweet as well. Having a three person faction with such a small roster doesn't seem to be conducive to varied television on either SmackDown or RAW at the moment.

The segment that came after the match was definitely a step upwards as Ruby Riott and Charlotte Flair cut two solid promos, before Becky Lynch made her first appearance since getting crushed by a door on 20th November. After seeing Logan and Morgan stumble through promos in previous weeks, it was certainly a wise decision to keep the mic in Riott's hands here and she ended up doing a good job. Riott bought a good intensity as she ripped on Orlando and actually made some suspect content about magic seem remotely interesting, before Flair's interruption (sans SmackDown Women's title) bringing out Naomi and then Lynch. Personally, I'm not sure what having Flair, Naomi and Lynch dominate the whole Riott Squad in their first confrontation does for this long-term, because surely the interest is in having Lynch still searching for revenge after the Riott Squad (or at least Riott) dodge the attack, but it was still a fun watch. 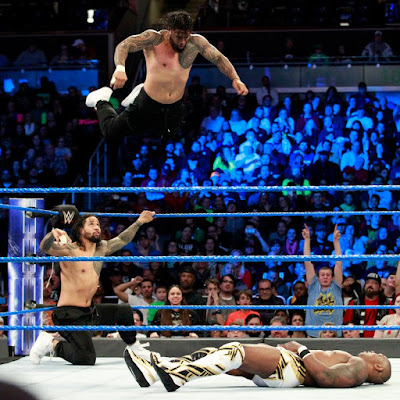 The first SmackDown title match of the year, followed the pattern of having questionable booking as we saw a dusty finish between The Usos and Benjamin & Gable. The thing here is that the first part of the match was actually very good, full of energy and with a shocking conclusion, because of the sheer dominance of the challengers. Benjamin and Gable continued to impress here and we didn't even see Gable pull out any Chaos Theories! The opening got the crowd pumped as Benjamin jumped up to meet an Uso on the top rope and nail a throw, before Gable nailed a moonsault for an early near fall. A lot of the action took place during the break with Benjamin & Gable working the leg and then when we came back it was straight into one of those wicked Uso hot tags. The spirited hot tag being cut off with one Uso getting thrown shoulder first into the barricade, followed by the other taking the Powerbomb/Double clothesline combination for the pinfall. It was refreshing to see such a major swerve from the regular format and also to see such a dominant win. I was considering the possibilities for the next few weeks as The Usos, who have previously been presented as the best tag team in WWE, looked to regain the belts and recover from being run over by a relatively new tag team. But then...

Basically, the pinfall happened between the two illegal competitors (which makes Benjamin look a little dim for not knowing he was the legal man) and then after an awkward moment with another referee coming out, the match restarted. The rest of the match was fine, there was absolutely nothing wrong with it, but it just wasn't the same. The energy wasn't quite there, my excitement had kind died down thanks to the whole restart angle. The actual finish was pretty cool with whichever Uso it was managing to block Benjamin & Gable's finisher by dropping down into a rana position from the powerbomb, leading to Gable jumping straight into a superkick from the other Uso, before multiple superkicks and a Superfly Splash meant the Usos held onto the belt. I guess that Benjamin & Gable's decisive victory first time around will mean that we'll get another title match between the two teams, that will hopefully keep things simple. 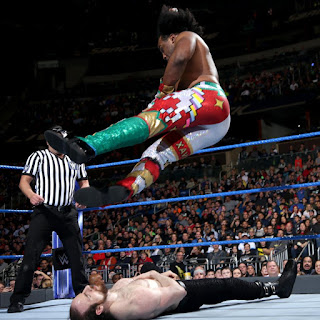 This clash was probably my favourite of the night, mostly due to it's lack of shenanigans, which considering Big E, Kofi Kingston and Rusev were at ringside for the entirety is pretty impressive. The match was a little short, but English and Woods worked a good pace from the off and included a few creative spots that helped the contest stand out. The opening back and forth section was very well put together as the pair slickly exchanged a number of holds, whilst the handful of spots on the outside, highlighted by Woods colliding with the steps after missing an Honor Roll, made for a delightful first few minutes. A near fall a piece, including a lovely Torture Rack backbreaker from Woods, kept the good times coming, before Woods picked up the win after escaping a potential avalanche piledriver with a back body drop and nailing Limit Break for the victory. Following this contest, I'm pretty sure Woods and English are two of the more underrated singles guys in WWE, right now. To top things off we also got Rusev singing before the match, which was wonderful.

Also this week...Bludgeon Brothers vs. Breezango didn't happen because Harper & Rowan started beating up Fandango & Tyler Breeze before the bout and then battered The Ascension as well after they tried to help...The commentary team did rundown of the Royal Rumble card so far, which seemed a little early, but whatever...Baron Corbin revealed that he'll be participating in the Men's Royal Rumble...Former Basketball player Karl Malone was shown in the crowd...


The first SmackDown of 2018 wasn't a great one, for me. This was mostly down to some weak booking and ongoing storylines that just seem unnecessary. Daniel Bryan's supposed heel turn is baffling, an all heel trios match struggled to hold the attention and whilst the dusty finish in the Tag Team title match wasn't awful, it wasn't as good as the first part of the match on it's own would've been! There were some positives though with Aiden English and Xavier Woods having a fun and creative bout and Becky Lynch's return helping keep the show's head above water.