The Non-Fan Review // Ospreay vs. Ricochet from BOSJ XXIII (Day 6) 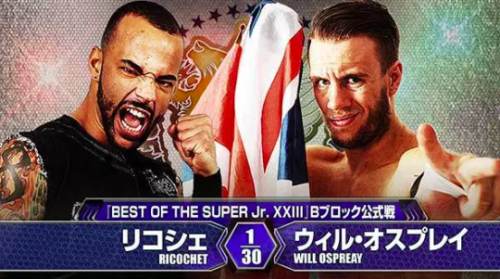 He who chases two rabbits catches neither.
- Japanese proverb

And that’s the major problem with this wrestling match: THE COMBATANTS ARE WAY TOO SODDING FAST! Seriously, this match is like the Flash made a baby with the Road Runner and that baby was christened by Usain Bolt with Billy Whizz and Cheetara from Thundercats as godparents. And then that baby was turned into a wrestling match. Allow me to elaborate:

Let’s go back to May of 2016; unlike me at that time, you were probably not furiously learning the best man's speech to my brother's wedding (it all rhymed, it needed extra rehearsal!), so you’re probably in better shape than I am to go to New Japan Pro Wrestling Best of the Super Junior XXIII (what a snappy title).

This Japanese show is such a subdued affair compared to the American extravaganzas we’re used to seeing: the arena is small but exceptionally well lit. Far from holding up signs about liking boobies or offering fish sandwiches, this crowd is extraordinarily controlled, sitting and clapping politely along with the music. But most gregarious of all: THERE IS NO COMMENTARY. I mean it: no odd observances from old chaps in cowboys hats, just silence.

Sorry, but this IS professional wrestling, isn’t it? Not a competitive sewing circle?

At this point, with zero fanfare, out walks our first hero: dressed like Adam Ant taking part in an am dram production of “The Mikado”, he’s a blonde chap with a union flag around his shoulders. Keeping the British end up - I approve. Chewing gum, shaking hands with the polite audience and doing little jigs, our hero poses like Darkwing Duck in front of the ropes, then does an impressive flip into the ring. The announcer in the ring gives him a hero’s introduction: “WIRU OSSUPURAE!” That’s Will Ospreay, a strangely-spelt raptor from Essex. Not much fake tan or “OH SHAAAAT AAAAAP YA FILFY CAAAAAAH” about this lad though.

But now the music gets more guitar-y and in dances our other fighter. His outfit of red y-fronts, Wonder Woman boots and a leather waistcoat is complemented nicely by his Matthew Corbett beard and big, shiny belt (I think it’s a prize of some description). Stopping constantly on his way to the ring to clench his fist and point at random people like a male Eurovision singer, he finally leaps into the ring and starts breakdancing. The announcer can hardly contain his excitement: “RIKOSHAE!” Ricochet is an American. But we aren’t holding it against him, he can’t help it. 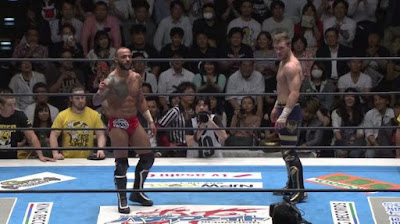 A single wooden “tonk” sound means we’re off. After prowling around each other like lions for several seconds, the two finally get stuck in and grapple: Ricochet gets Will in a wrist lock. This is a VERY GOOD MOVE: the first thing I learned in my self-defence course from Sensei Gary was how easy it is to break an attacker’s wrist; but Will is no amateur, he does elaborate rolls and twirls on the floor to take the pressure off, like a disco caterpillar. But then Will bounces up, trips his foe over and gets him in an ankle lock, triumphantly saying “WHOO!” like a hyperactive Thomas the Tank Engine.

Ricochet flips out of this predicament but Will isn’t finished: he tries bending the colonial over his shoulders like that one scene in Men in Black II. (Am I the only one who remembers that film? Thought so. You’re missing nothing.) But beardy-weirdy isn’t standing for that! He rolls out of it and stares Will down, while making his nipples dance for the crowd. Alas, Will sadly can’t do this trick.

(It’s also one of the few I haven’t mastered either, though I can wiggle my ears and move each eyebrow independently. I can be booked for birthdays and weddings.)

But enough of party tricks: Will gets Ricochet in a headlock, only for the latter to pull the former’s hair and make him shriek “REF!”

Hang on - so kicking each other in the bollocks, hitting each other with furniture AND tearing off each other’s clothing is totally fine in wrestling, but PULLING HAIR IS AGAINST THE RULES???? Meh, the ref isn’t bothered either way so I’ll follow suit and watch the two combatants fight.

Sorry, did I say “fight”? I meant “bounce off the ropes constantly and flip over and under each other for a good 45 seconds like Power Rangers on ecstasy”.

I’m honestly not sure what I’m watching right now.

Somehow, Will crawls over Ricochet like a centipede - you have to see this to believe it - and flips him, but the American bounces back. Then, for some reason unknown to man, both combatants choose that moment to cartwheel into the ropes, backflip and land in the middle of the ring like Spider-Man. All in perfect synchronisation.

Is this how the Japanese like their wrestling, with sprinkles of Super Sentai-style aerobics? Because from my western point of view, it’s just going to tire them out quicker!
In fact, they really ARE tired after that little display: they square off to each other like kids in a schoolyard, then just stand still for a good 24 seconds. 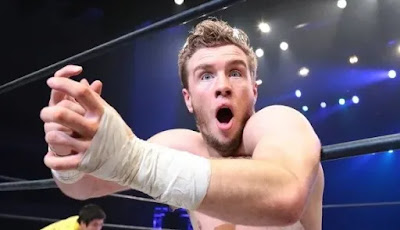 Until Ricochet kicks Will in the goolies and slaps his face, to the ref’s disapproval. Finally, 5 minutes and 41 seconds in it’s more like a wrestling match rather than a West End musical!
Ricochet gives Will a pimp-slap, causing the Brit to emit “OOH YOU BASTARD.” Will is my spirit animal.

More twirling kicks and landing dramatically between the pair and Will gains the upper hand, pinning his adversary: ONE, TWO - nope, not over yet.

Creatively, Will puts his rival in an interesting hold where he clings to his back and pulls one arm up; if Will had just tickled him under the arm at this point, the match would be over with 7 minutes. Sadly, Will lacks my imagination and just grinds his fist into his enemy’s side. But Ricochet wriggles out and does a flip while holding Will’s head, so the Essex boy rolls out of the ring with a hearty “FACKIN ELLLLLLLLLL”. (I might have made up that last quote.)
Ricochet somersaults out of the ring and into Will, even making contact with the fans. In the west, H&S would have a heart murmur at this idea; Japanese fans seem to love it though. They’re a hardy breed, these Super Junior fans.

Shoving Will back in, Ricochet dives in over the ropes and ends up head butting Will’s chest while so doing, leading the Essex wonder to scream “YOU MOTHERFUCKER”. Mouth of trucker, this one. I wonder how many Japanese fans were introduced to naughty language from this match alone? But Ricochet isn’t finished! He presses his booty on Will’s collarbone, making his little legs wiggle like a six-year-old’s. Cute.

A few more blows, triumphant nipple-wiggles and a hearty “come on, Will” from Ricochet finally galvanise the limey to get up and punch his foe in the dong, only to end up being having his back hurt against Ricochet’s knee like Bane did to Batman. But that’s not all: Ricochet immediately stamps on the air around Will’s head, which somehow hurts Will’s eye.

More elbowing each other’s faces and flipping about like Zebedee until Will jumps off the ropes and punches Ricochet with a hearty “PIP PIP CHEERIO, MOTHERFUCKER!” #britbantz
The American rolls out of the ring but the Briton flips onto hm, again making contact with audience members; I notice this time there are people with yellow t-shirts acting as human shields for the audience.

Then Will gives the camera a big, sweaty kiss. I have no idea how to process it and I need to ask myself some very searching questions. 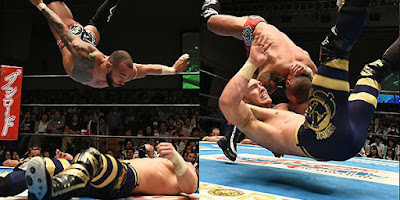 Will drags Ricochet back in and they both seem to have sore backs suddenly; trying to get each other in locks, they’re both looking a little peaky. After a couple more attempts at getting each other in a lock, and kicking each other’s faces like Hero Turtles, the referee stands over the air, rolling around in agony, and shrugs. I admire this “I don’t really give a toss” attitude.

They both stumble out the ring and take turns in kicking each other in the face; once they’re supine on the floor, barely moving, the ref again comes over and seems indifferent.
But NO! The referee is slowly counting: “ONE, TWO, THREE…” Is the match over if they’re out of the ring for a certain amount of time? Well, they’re rolling on the floor, seemingly hardly capable of movement. Yet magically when the ref says “NINETEEN” they both leap into the ring like gazelles. CONVENIENT…

More blows exchanged, though the pair are certainly tired. Getting the upper hand, Ricochet is face-first in the canvas with his bum sticking out. Will pulls a face that says “I SHALL FEAST ON HIS ARSE!” and tries to bear hug him, only to be kicked away. This is a strange one.
They’re so tired and it’s getting infectious. Bet they regret those OTT gymnastics now! They take turns in trying to pin each other and even simultaneously pin each other at one point - would that have been a draw?

But in the end, it’s Will who jumps off the corner and pulls down Ricochet’s head, dazing him enough for a ONE TWO THREE - and it’s finally over!

So from first impressions, Japanese wrestling is much more subdued. I’m not entirely convinced this is a good thing: it’s much faster than any other match I’ve seen to date but harder to follow.

Ah well, at least Essex finally has a trophy to call its own.

Next time for Nicholas // Kane vs. Raven vs. The Big Show for the Hardcore Championship (WWF WrestleMania X-7) 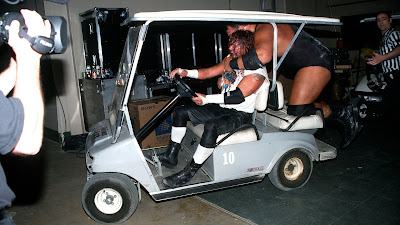