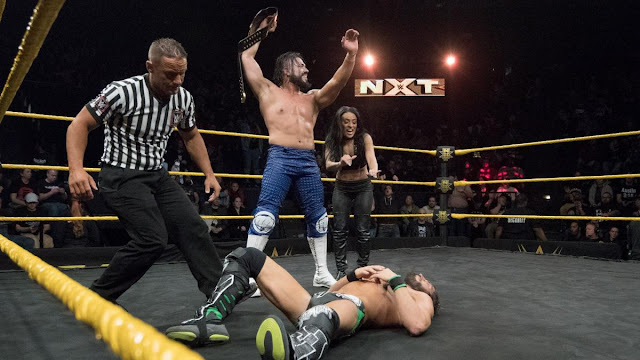 On 21st February 2018, WWE aired its 288th episode of NXT, filmed at Center Stage, Atlanta, GA on 1st February. Our main event was another TakeOver: Philadelphia rematch as Johnny Gargano put his NXT career on the line for another shot at Andrade Almas' NXT Championship. The show also featured action from Nikki Cross, Velveteen Dream, No Way Jose & Vanessa Borne aswell as a big announcement from William Regal. But was it any good? 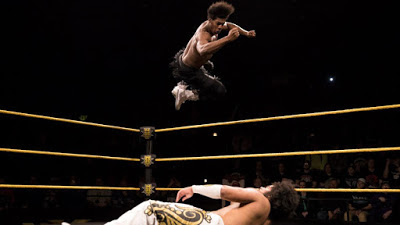 Velveteen Dream is a force of nature when it comes to controlling crowds that not even the one-man conga line that is No Way Jose can contend with as this Atlanta crowd is approximately 100% Dream fans. The match itself was far from the best thing either man has done but still an entertaining enough encounter to start the show. Dream won in about four minutes with the Purple Rainmaker diving elbow. I can't say I'm not just a lot bit excited about the prospect of Velveteen Dream vs. Tyler Bate, No Way Jose, look out for him in the Andre the Giant Battle Royal this year probably.

Post-Match: Dream got on the mic, announcing himself as Male of the Year, Competitor of the Year and Match of the Year, he then told Black, Asuka and Bate no one cares, he said his name was on everyone's tongue and if you can't see that, he doesn't have time for you. Asuka's gonna kill you, m8.

Andrade Almas and Zelina Vega hype themselves up for the big match later.

William Regal announces that in two weeks, the Dusty Rhodes Tag Team Classic starts up again and that the winner of the Classic will also become number one contender's for the NXT Tag Team Titles and get their shot at TakeOver: New Orleans. 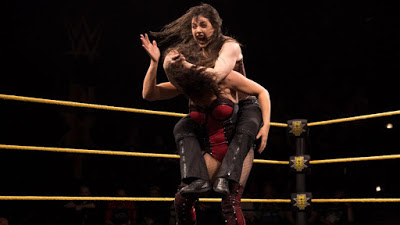 Don't ask me to explain why but the official photos for this match on the WWE website are actually from a completely different match between these two in case you're wondering why Borne's black and white singlet from the TV is black and red in the photo. Not exactly a long match but Borne showed a lot more here than in the Mae Young Classic suggesting she's developing well as a performer, especially in her movements where she portrayed a more confident, heelish character though it also helped her that she's working with one of the most beloved faces of the NXT roster in Cross. Anyway, reasonably standard little match with Cross working a hot comeback and getting the win with The Purge swinging neckbreaker (yes, it has a name now). The right woman won but I think we could be seeing big things from Borne.

Johnny Gargano is chilling out backstage with Candice LeRae, trying to psych himself up.

Shane Thorne tweets about wanting to win the Dusty Classic 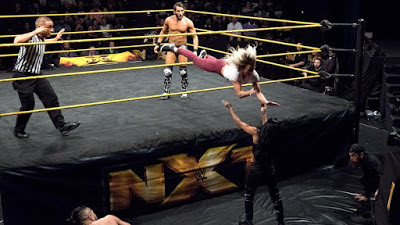 Well it wasn't quite as good as their Philadelphia encounter but I'm starting to wonder if anything could be. The Title vs. Career stipulation worked wonders for this match as even more than normal, the crowd hung on every near fall as they saw Johnny's NXT life flash before their eyes each time. The match started quickly as Almas rushed straight in trying to use his size and power advantage to get a roll-up off the off, trying multiple pinning combinations but Johnny Wrestling doesn't go down without a fight. Of course, these two have worked each other so many timbecame less about heel shenanigans than two men just trying to fight for the thing that matteres that their chemistry is basically only rivalled in NXT by Bate and Dunne but also they play so well off previous encounters with moments like Gargano going for a second slingshot spear only to leap into a Fujiwara armbar from Almas coming off perfectly. Especially clever was deploying the LeRae-Vega beatdown/chase-off within the first quarter so that the match s to them most in the ring. There was some clever playing on expectations as Gargano attempted a Hammerlock DDT and at times, Almas locked to be trying for a GargaNo Escape, there always comes the point in long series' like this where the only thing the competitors have left to shock their opponents with is each other's movesets. The finish off the match will probably be the most talked about thing here as in the time-honoured tradition of the ref-bump, Almas accidentally hit a back elbow onto Drake Wuertz, sending him prone, as this happened Gargano locked in the GargaNo Escape, looking to hold it until the Wuertz recovered but while he had it held, in came Tommaso Ciampa who golf swung a crutch to the back of Gargano, this gave Almas a chance to hit the Hammerlock DDT for the pin. Everyone played this moment beautifully including Wuertz who gave a slow three count with a mix of pain from the bump but also apprehension knowing that he was damning Gargano to never again returns to these hallowed grounds. You may have guessed from the review thus far, I really liked this match, it was easily better than their second encounter and possibly as good as the first but it was never meant to be the best: Almas and Gargano's tale is a depressing one for the world of wrestling as it's a story of a man unable to exorcise the demons of his past and as a result, unable to move on or upwards. Stories of failure are hard to do without just disappointing the audience but as much as this was not the result they wanted, it continues to feel like the right one as the eventual encounter between Gargano and Ciampa feels bigger than any title and Almas continues to both mean more from holding the title and making the title mean more by him holding it. Goodbye Johnny, it's been fun. I hope they treat you well on whichever main roster brand they send you to but suffice to say, there's nothing more that we can say from down here around the yellow ropes than 'Thank You, Johnny'.

As Gargano is helped up the ramp for the last time by LeRae, Ciampa stands in the crowd waving goodbye to close out the episode. I don't think I can legally publish my thoughts on that man at the moment.

Velveteen Dream's interview is interrupted by a passing Tyler Bate, Dream tells him to give him some of his water so Bate crumples the mostly full bottle on his chest. Bit rude. Tyler looked cute with his glasses on his forehead.

Johnny Gargano walks through the backstage of Center Stage possibly for the last time. Just shut up, you're the one that's crying. 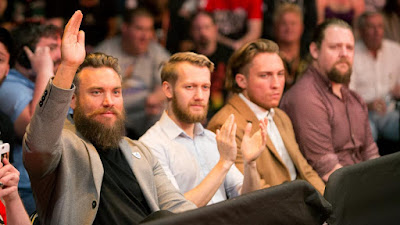 The first half of this week's episode was pretty standard NXT-by-numbers with some decent announcements of forthcoming matches and solid in-ring action. Then we got to Gargano vs Almas IV and it became amazing. This was easily the best NXT TV match of the year so far and another reminder of just how good all six performers (yes six, people don't give referees enough credit) are. Plus Percy Watson called the ring apron 'the hardest part of the mat' which is accurate because nothing on the mat is as hard as the metal ringposts. Everything's looking up for NXT in 2018, we have four great champions, a whole host of great performers vying for their spots and another Dusty Classic on the way. Blow a kiss, take a bow, Everything's coming up roses.