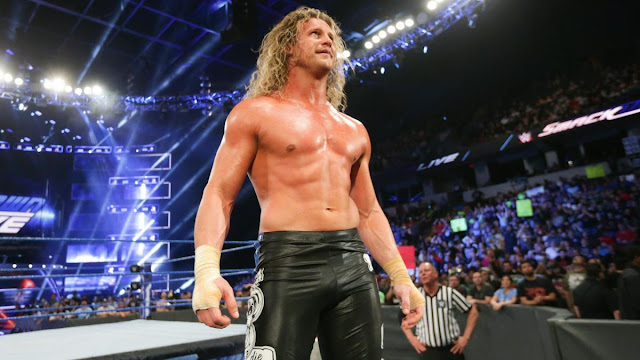 SmackDown continued to move towards Fastlane this week with some big changes made to the 11th March main event. The show featured a major storyline involving Kevin Owens & Sami Zayn interrupting a scheduled match between Baron Corbin and Dolph Ziggler, before Owens faced Corbin and Zayn took on Ziggler, with Corbin and Ziggler being added to the WWE title match at Fastlane if they were able to pick up the win. But how did it all go down in Bakersfield? Lets take a look! 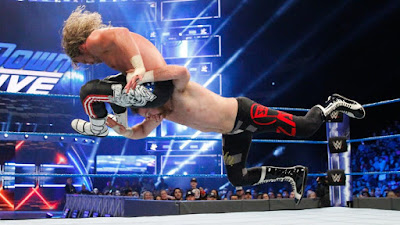 There were some big changes on SmackDown Live this week, as Dolph Ziggler pinned Sami Zayn and Baron Corbin did the same to Kevin Owens to insert themselves into a WWE Championship match at Fastlane that will see AJ Styles defend against all four of the above. However, the advertised match had been Corbin vs. Ziggler for a place in the match, so how did we get here? Let's start at the beginning. The opening segment saw Corbin about to enter the arena to face Ziggler, only for the show to cut back to the backstage area where Owens and Zayn were assaulting the 2017 Money in the Bank winner. This was followed up by the pair heading out to the arena to leave Ziggler laying also. The segment had a tonne of energy and left a number of questions open for the rest of the show. The moment where Owens and Zayn had finished laying out Corbin and said they were heading for Ziggler was brilliantly done and helped to raise the tension for what was about to follow, aided by Zayn then attempted to go through the crowd to assault Ziggler from behind. It was cool to see what we thought the show was going to be shift in front of our eyes and the whole interaction felt fresh and different, with Owens & Zayn's motivation of wanting to make sure no one ended up joining their match with Styles came across very clear.

After Commissioner Shane McMahon had informed General Manager Daniel Bryan of his plans for the foursome, the first match was Baron Corbin's victory over Kevin Owens, thanks to an impressive End of Days. This was a solid contest, that struggled to draw the crowd in due to the ambiguity over Corbin's character. It was clear that Owens was the heel, but not massively clear if Corbin was still heel or had turned babyface and therefore it appeared like the audience struggled to get into what was going. This was especially clear when Owens looked on a rest hold and the crowd chanted "Rusev Day" (it's actually baffling that they'd even think about leaving the Bulgarian off the show). Corbin hadn't shown enough for the audience to get behind him and even if he sold the attack from earlier well on the way down to the ring and after the match, it wasn't particularly present in the match and therefore his "in" for gaining some sympathy was removed. This wasn't helped by the fact that Owens is generally the more exciting performer to watch. The back and forth finish was a lot of fun with the working well together before Corbin escaped a Pop-Up Powerbomb and hit his finish for the win. Whether Corbin is now a babyface going forward or not really isn't clear, but he's now got his first shot at the WWE title since failing to cash in his Money in the Bank briefcase in August.

The main event saw Dolph Ziggler defeat Sami Zayn with a superkick in the first ever televised match between the pair. This match didn't suffer from the same affliction as the Owens vs. Corbin match as it was made very clear that Ziggler was the underdog (not from the underground) and the Show-Off reached deep into his babyface bag, selling within an inch of his life throughout. Whilst the majority of the action was good stuff, including highlights like Ziggler hitting a picture perfect dropkick to Zayn's gut as he dived off the top rope and a big exploder suplex off the top from Sami, it was in the final minute or so that the match excelled. After a strong near fall from a ZigZag, Zayn's vicious side came to the fore as he threw Dolph shoulder first into the ringpost repeatedly, with Ziggler selling like he'd been hit by a truck, completely out on his feet, only to sneak a two count with a roll-up after Zayn took too long going for a Blue Thunder Bomb he really didn't need to hit. This set up Zayn's out for the subsequent loss as he clearly had the match won, only to end up costing himself as Ziggler blocked a Helluva Kick with a kick of his own, this time of the super variety. Crisp and fluid wrestling throughout, that did a good job of getting the character shift over with a great conclusion, the main event was easily the best match on the show this week. 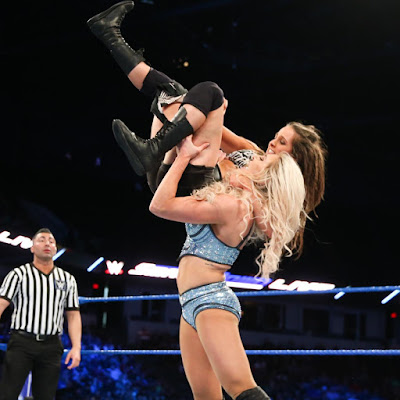 This week's only women's action saw SmackDown Women's Champion Charlotte Flair walk out victorious over Riott Squad member Sarah Logan, winning with Natural Selection, after a poor match. The match had started fairly inconspicuously, with nothing much of note either good or bad, but during the split-screen advert break something seemed to fall apart and it appeared like everything Flair and Logan attempted went wrong in one way or another. I had been looking forward to seeing what the pair did together, so I was more than a little disappointed while watching them botch sunset flips. The match did pick up later on with Logan hitting what looked like a crotch clutch suplex after Flair had missed a big boot and got her foot caught up on the top rope standing out. After the match Corey Graves said on commentary "I have a feeling this rivalry is just getting started!" and I had to wonder "Where the fuck have you been, Graves?". The feud (also involving Becky Lynch & Naomi, who were present at ringside) has been going on since November and I'm still not quite sure why. The Riott Squad haven't felt like a threat to SmackDown's top three women since their debut, not helped by the fact that Logan is yet to win a singles match in WWE or NXT. 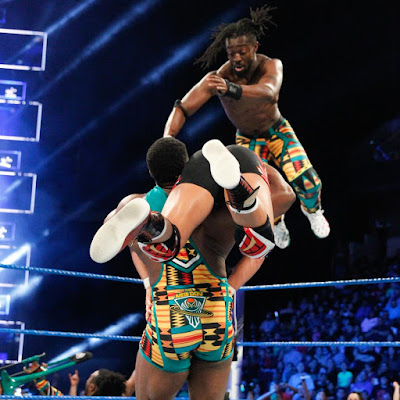 Shelton Benjamin & Chad Gable's crusade to rid the SmackDown tag team division of comedy acts came to sudden half this week as they suffered a loss to Kofi Kingston & Big E of the New Day's Midnight Hour, after initially interrupting Big E's pancake eating world record attempt. New Day have gone pretty mad for p-cakes lately and it seemed only sensible that they'd have a big Shrove Tuesday celebration, before giving up their eggs, milk and flour for lent. The segment was a little long winded, but came good in the end when Benjamin and Gable started throwing those pan-based deserts to the mat one by one, whilst Big E furiously attempted to stop their blasphemous acts. It probably shouldn't have worked, but it was played very well by all involved, with Benjamin & Gable being particularly entertaining. The tag match that followed might have been for the dignity of pancakes everywhere, but was actually a rather lovely tag bout. The classic New Day tandem of Kingston & E was back together for the first time in 2018 and both excelled in their roles as Kingston took face-in-peril and Big E came soaring in with his magnificent hot tag. The best action actually came with Kofi battling against Benjamin & Gable, as the trio worked in a number of strong hope spots, with Kingston firing up for the tag only to run straight into a rolling koppu kick. It appears that The Usos are moving into a feud with the Bludgeon Brothers, so I'm not quite sure where this result leaves the rest of the tag team division, but I'd be very surprised if The New Day don't have a role at WrestleMania. 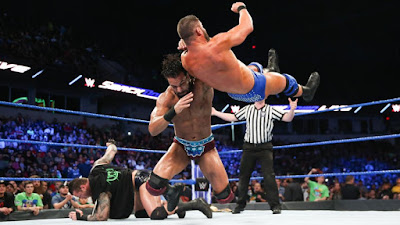 A United States Championship open challenge from Bobby Roode, appeared to be delivering us a match between Roode and Randy Orton, only for Jinder Mahal to come out and spoil the party before it could begin. I'm unsure how I feel about Mahal, because his involvement in this feud will undoubtedly bring down the quality of any resulting matches from this storyline, but he was actually used well here, acting as the spoiler for the two babyfaces. His appearance made me groan, but I'm sure that was the exact reaction I was suppose to have. Whilst Mahal stirring up the pot went on for a little bit too long and using the "SmackDown Top 10" rankings (that WWE decided not to change this week, with no explanation of how often they will be updated) to drive a storyline is more than a little lame, the idea at the heart of it was a good one and it was fun to see the tension build between Orton and Roode. Mahal would end up standing tall, getting the best of both men with a pair of Khallas, after Orton had RKO'd Samir Singh. Considering we'll almost inevitably have to get a couple of Mahal matches during it, this very well could be the peak of this storyline.

- In a well-directed segment, The Usos cut a promo about their tag team dominance, only for the Bludgeon Brothers to cut the segment short as they attacked the television playing the promo with their big ol' hammers. 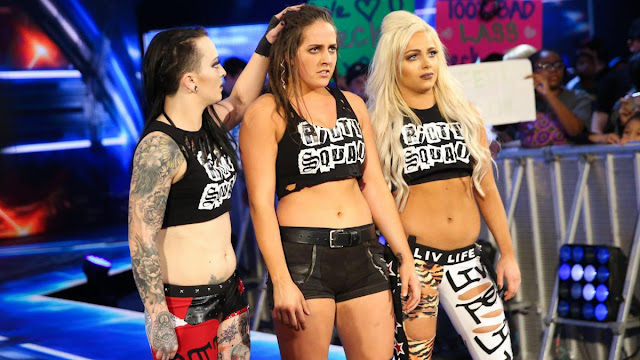