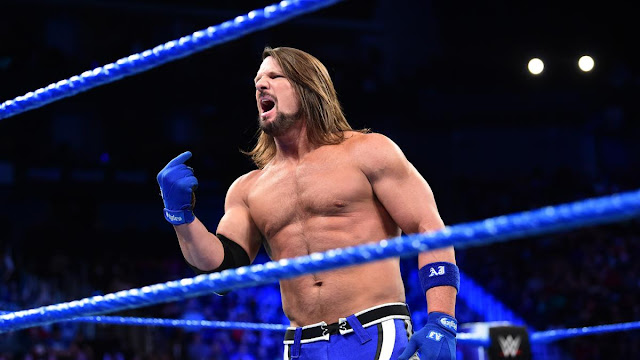 For the first time since May 2016, SmackDown returned to Kansas City, Missouri on 6th Feburary 2018, as the building blocks for Fastlane began to be laid down. The show featured best pals Kevin Owens and Sami Zayn battling each other to become #1 Contender to AJ Styles' WWE Championship in the main event, as well as Bobby Roode putting the WWE United States Championship on the line against Rusev. Lets take a look at how it all went down at the Sprint Center Arena. 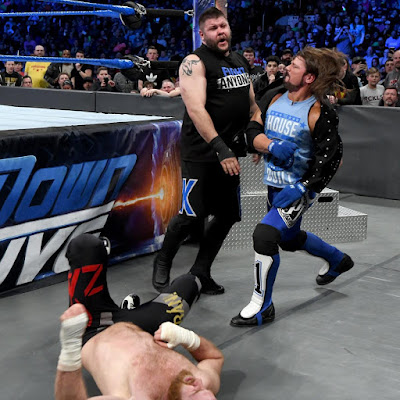 The AJ Styles/Sami Zayn/Kevin Owens/Daniel Bryan/Shane McMahon saga rolls on for another week and supposedly onto 11th March's Fastlane PPV at the very least. This week we began with an overly long chatter segment featuring McMahon, Bryan and Styles. This included the line "the stakes have epic implications of what's going to happen" from McMahon when discussing the main event between Owens and Zayn. That line isn't far behind Michael McGillicutty's classic "Genesis of McGillicutty" promo from NXT Season 2. Both Bryan and McMahon struggled saying the word "ripping" for some reason and the crowd mostly just allowed them to have a conversation. That is until McMahon threw a barb Bryan's way about vicariously living through Owens and Zayn, because the former WWE Champion was desperate to get back in the ring. The crowd gave the moment the reaction it deserved, making note of the tension between the two and the apparent sign that an in-ring return for Bryan could be on its way. Seemingly because creative couldn't come up with a way to end the segment effectively, AJ Styles came out to interrupt, cut a decent travelling champion style promo, before telling the Commissioner and General Manager to stop obsessing over Owens and Zayn.

The main event between Zayn and Owens resulted in a no contest, after Zayn got into the face of guest commentator AJ Styles and the WWE Champion teed off on both competitors. Daniel Bryan then confirmed that Styles would have to defend against Owens and Zayn at Fastlane, this time in a triple threat match. Despite the non-finish, the clash between Zayn and Owens was actually pretty damn good, telling a quality story of two friends wanting to remain respectful but soon getting out of hand. It was a relatable narrative, that was driven by the vocalisations of both men, but in particular Kevin Owens. K.O. ducking to the floor after a particularly spicy strike from Zayn and yelling "calm down" at his pal was brilliant stuff, because we all know that it never works, whilst Owens' "I'm the one that wins the titles" after the aggression had heightened told of just how far the match had come as the pairs true characters began to show through. The wrestling action was great also, complimenting the story with the pair able to counter a number of their signature moves, before the highlight of the match came when Zayn slickly escaped a Pop-Up Powerbomb attempt and nailed a half and half suplex and blue thunder bomb for a decent near fall. It's a shame that this story has been going on so long, because I'm not sure how they're going to fill the next four episode of SmackDown Live before Fastlane and as good as the triple threat has potential to be, it really should have happened at Royal Rumble instead. 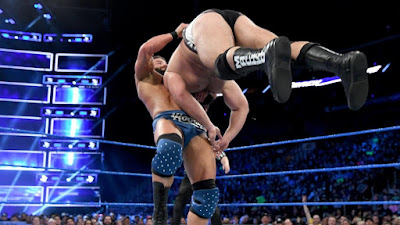 Bobby Roode picked up his second successful United States title defence with a clean win over Rusev, following the Glorious DDT, in a good TV bout. Following the match, Randy Orton flew through the air to deliver an RKO to Roode and then Aiden English and Rusev got on a piece for good measure. Where this is going I'm not sure, but RKOs are fun, so why not? Rusev gave Roode a much better challenge than that of Mojo Rawley at Royal Rumble, moving from a nice amateur style opening section to a stellar back and forth closing stretch. The Bulgarian controlled long stretches of the match, with Roode making comebacks after both commercial breaks. Before the finish, the highlight for me was a strong near fall for Rusev, that came bang in the middle of a supposed comeback from Roode, with English acting as a distraction, allowing Rusev to recover and nail a Machka Kick for a long two count. It seemed that more than a few members of the crowd bought in the false finish as well, as they looked for the uber popular founder of Rusev Day to pick up the upset. It was pleasing to see the Bulgarian Brute back in a top slot on SmackDown and hopefully he'll be given some more big matches soon. 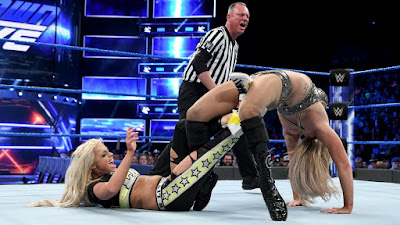 The only women's match on the card saw Charlotte Flair remain undefeated since July, after the SmackDown Women's Champion bested Liv Morgan with the Figure Eight. This was a basic match, boosted by a spot where Morgan's Riott Squad partners Ruby Riott and Sarah Logan were removed from ringside for interference and held back the occasional sloppy moment. This was particularly prevalent in the finish, when after Riott and Logan had been chucked out, the finishing sequence was a bit awkward in how it was put together, even if the moves themselves were relatively well performed. Flair spearing the fuck out of the sub-eight stone Morgan was unarguably the highlight for me, whilst Flair's aggression at the start following the Squad's attack on her last week was also rather nice. The commentary team kept discussing the "rumours" that Flair had asked for this match herself, I'm not sure what this was supposed to mean or how I was supposed to feel about it. 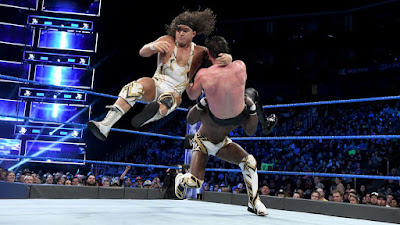 After cutting a hand-held promo about wanting to bring prestige back to the tag team division, Shelton Benjamin and Chad Gable continued their rebuild following their loss at Royal Rumble with a swift victory over The Ascension, with the Powerbomb/Diving Clothesline combination, in a fun squash. The crowd wasn't all that bothered, mostly because the Ascension haven't won a straight tag team match on TV in two years (12th February 2016 episode of Superstars - vs. Fandango & Damien Sandow), but the bout did it's job and featured some enjoyable action. Viktor's energetic hot tag was the peak of the contest as he got to show off just a little of what he's capable of, before the finish ended up being a bit messy and lacked the finesse we've seen from the promising Benjamin & Gable tandem in a recent months.

The Usos killed it on the mic 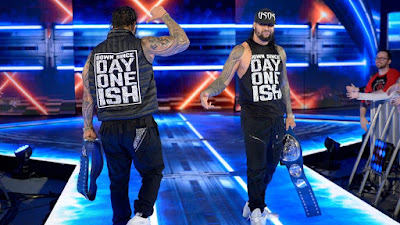 The Usos are bloody brilliant and their promo outlining their "Street Code" was another example of that brilliance. The concept really shouldn't have worked and quite honestly sounded a bit lame, but I never should have doubt Jimmy & Jey because they're are high calibre dons that should be respected at all costs. The two brought passion and charisma to their lines, coming across with their natural chemistry, whilst discussing the changes they've gone through over the last 18 months. Referencing how fan opinion had changed and getting a great reaction when they mentioned that they'd gone from "Yeah, they might be alright" to having match of the night, the two closed with their paranoia catchphrase before leaving unchallenged. A confrontation beforehand would seem to hint that future challengers could be... 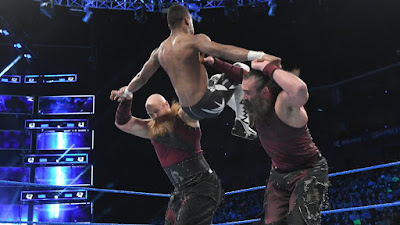 Now undefeated in nine match, The Bludgeon Brothers ran through AAW's Mat Fitchett and a lad without a cagematch profile called Kenny Alfonso, winning with a double crucifix powerbomb. Big lads squashing small lads is almost always a cool thing to watch and this was no different, as Harper & Rowan lobbed Fitchett & Alfonso all over the place en route to taking the victory. 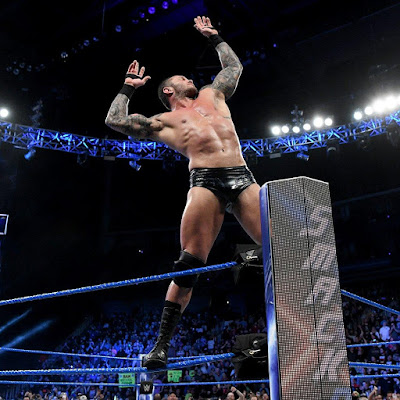