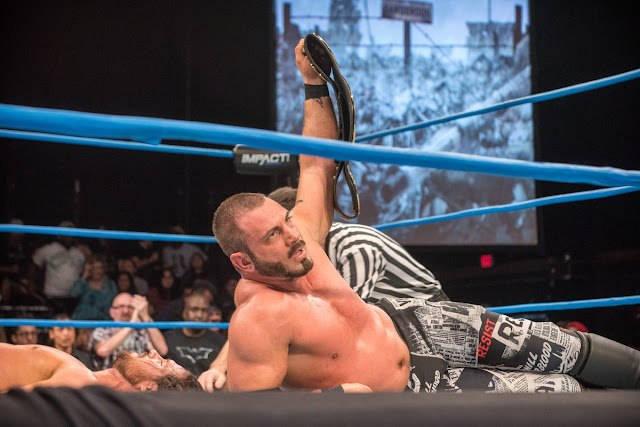 A big week for IMPACT this week as they presented a special edition of their TV show entitled Cross Roads. This show was main evented by a first-time ever match for the IMPACT World Champion as Austin Aries put his strap on the line against Johnny Impact. But how did it all go down in Orlando? Lets take a look.


Before the match - Austin Aries pulled his suitcase up to the building - Johnny Impact did the same thing but for some reason was surrounded by four men carrying American flags, which was weird - Austin Aries showed off his various title belts, before saying Johnny Impact would have to get nasty to take the IMPACT World Championship from him - Johnny Impact took the piss out of Austin Aries for calling himself the Greatest Man That Ever Lived and carrying around four titles, claiming that the Champion was insecure. 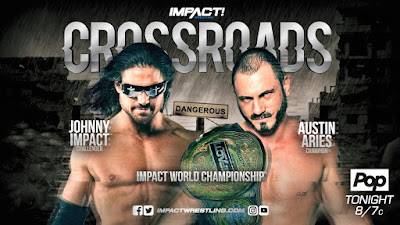 Another successful title defence for Austin Aries and another high quality main event from the Greatest Man That Ever Lived, this time with Johnny Impact as the challenger. This match featured some brilliant action, as the two seemed to click early on with a could of back and forth sequences, quickly trading holds and strikes as each man came off on the better end of one string of action and then began to build from there. With two babyfaces involved, the match played with the idea that the two had very similar styles, with Impact perhaps having the speed advantage, whilst Aries controlled portions because of his more vicious streak when compared to the former WWE Intercontinental Champion. With the crowd split, the match included a number of impressive spots, such as Impact getting tripped on springboard attempt before bumping on the top turnbuckle and tumbling to the floor and a Death valley driver on the apron but the highlight was a beautiful sequence that concluded with a middle rope Spanish fly from Impact. Whilst the wrestling was always super crisp, I felt like the match could've done with a little extra drama, with Impact only really coming close with roll-ups, whilst Aries winning with his corner dropkick and brainbuster sequence made the win feel a little more straight-forward than I would've liked. I'd be more than happy to see these two back in their again sometime soon as I feel that this match only scratched the surface of what the creative duo could do together.

After the match - Alberto El Patron applauded both men from the apron and then weirdly undid his shirt to close the show.

Before the match - Whilst meditating on a production box, Matt Sydal said some things
about his match and third eyes and stuff 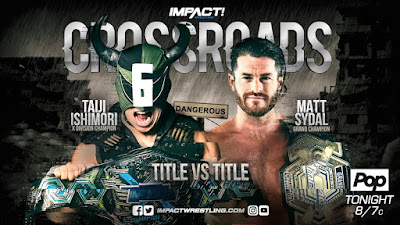 Matt Sydal retained the IMPACT Grand Champion and also became IMPACT X Division Champion, using a Shooting Star Press to pin Taiji Ishimori in a solid X-Division style tussle. This featured some lovely action at points, but also didn't quite hit the highs that I would've liked to have seen it hit. The finish in particular was really well done with a series of fast-paced aerial reversals and signature attempts, that concluded with Sydal getting his knees up on a 450 splash before answering with a Shooting Star Press to get the win, whilst Ishimori's offence on the outside with the Golden Moonsault and no-hand rana on the ramp always impressing. However, in the earlier part of the match, Sydal looked half-step off the pace and this hurt the opening as it lacked the speed that it needed to truly excite. There was also a lot of time spent with Sydal working over Ishimori's leg, that ended up coming to absolute nothing, as whilst the NOAH star sold well, the injury wasn't made use of in the matches narrative at all, making that lengthy sequence relatively obsolete. Overall, this featured some enjoyable high-flying action, but could have been a lot more with a bit of attention to detail.

Before the match - Allie said she was ready to take on Laurel Van Ness, saying she'd dedicate the match to Gail Kim. 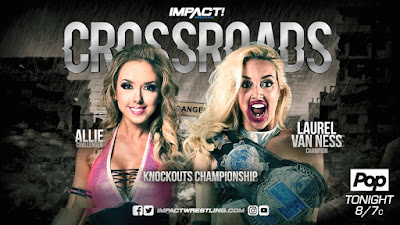 In a scrappy match, Allie began her second run as Knockout's Champion, with a victory over Laurel Van Ness. This wasn't a classic match by any stretch of the imagination, with a good deal of moves either looking awkward or downright sloppy, but there was also a strong sense of the pairs dislike for each other and a solid structure, alongside a couple of big spots on the floor. The strongest action of the bout came from a nice little sequence where Van Ness missed a diving double stomp to Allie's back, then rolled through, only to be caught with a lungblower for a near fall, whilst on the other side of the coin you had a weird looking bulldog thing from Van Ness. A near fall that saw Allie take an Unprettier on the floor, three curb stomps into the bottom turnbuckle and another curb stomp in the ropes felt like complete overkill and took me completely out of the bout. I understand that Van Ness is leaving the company, but building Allie in this way feels a little forced and the fact that she quickly recovered to hit the Allie Valley Driver and Best Superkick Ever for the win wasn't how I would've liked to have seen her second run as champion begin.

After the match - Gail Kim told Allie was proud of her once the new IMPACT Knockout's Champion got backstage. 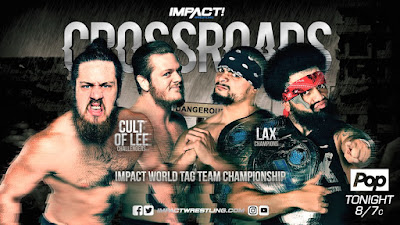 LAX made their first defence during their second reign at IMPACT World Tag Team Champions in a good opening match with Cult of Lee duo Trevor Lee & Caleb Konley. There was a lot of fun action going on here, including a number of slick sequences involving Trevor Lee, whilst LAX continued to impress as babyfaces putting a great display of their tag team offence when called upon including a lionsault and leg drop combo and an assisted moonsault followed up by back to back tope conhilos. The team known elsewhere as EYFBO are an exciting duo to watch and it was on full display here and they ended up looking super impressive with this victory. I would have liked to have seen the match featured a few more near falls, with an extra five minutes to really take this to the next level, whilst I'm still not massively enamoured with Caleb Konley either and his hokey selling was one of the drawbacks of the contest. One things that's for sure is IMPACT need to bring some more teams into their division, because LAX need a good line of challengers to showcase themselves against having already gone over Cult of Lee and oVe.

Taken from Destination X 2006, Christian Cage retained his NWA World Heavyweight Championship against Monty Brown, putting the Alpha Male away with an Unprettier. I'm not sure why this match was chosen for re-air, because it was mostly dull action and there's three or four better matches on that show. It was a power vs. speed affair, joined in progress during a Brown beatdown, so maybe there was some more exciting stuff earlier in the match, but what was shown here was mostly Brown using strikes and awkward looking submissions. There's a couple of cool moves later in the bout, as Brown hits a lovely Alpha Bomb, amidst numerous Unprettier and Pounce attempts, before Cage wins clean with his finish. Brown was never known for his match quality, but if you're looking to watch some classic Cage in TNA, then I'd recommend his ladder match with Kaz from Genesis 2007, matches with Samoa Joe from Bound For Glory 2007 and Final Resolution 2008 and bout with Kurt Angle from Destination X 2007, as much better starting points than this.


Before the match - Lashley claimed he didn't care if he had to fight the whole state of Ohio, he was going to win his match tonight. 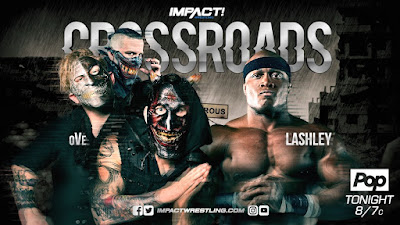 What was promoted as a handicap match between Lashley & oVe, finished with Brian Cage getting the pin with the Drill Claw. As awesome a move as the vertical suplex piledriver is, there is no universe were having someone who wasn't in the match get the pin is a good move. If the match was advertised as a tag match and Lashley just didn't have a partner because of Eddie Edwards' injury last week, then I'm cool with it, but it wasn't. The rest of the match was nothing as well, mostly consisting of Lashley getting beaten down by Jake & Dave, whilst Sami Callihan would pop up every now and again with his baseball bat, as commentary continued to talk about the horrible incident from last week. Cage looked great when he came and lobbed oVe all over the shop and if it had just been Cage coming down for the save, I'd have been absolutely cool with anything that came after his entrance. It looks like they're setting up for a Cage vs. Lashley programme, but it seems weird to move so quickly past the rivalry with oVe after what happened to Edwards the week earlier.

- It was announced that the Feast or Fired match will return next week.