The Best of Times…The Worst of Times // WrestleMania 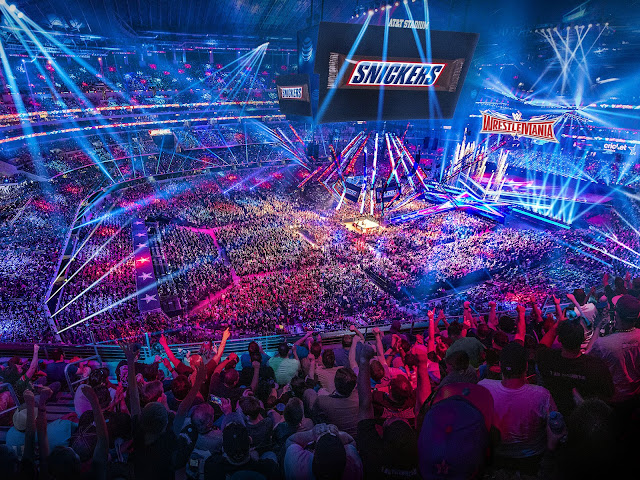 The SuperBowl; The World Series; The World Cup; WrestleMania: the fact that Vince McMahon’s showpiece event is regularly mentioned in the same breath as these mainstream juggernauts is testament to his vision and drive, proof that his legacy goes beyond wrestling and touches the worlds of sport and entertainment. Whichever city secures the show of shows becomes the epicentre of the wrestling word, hosting a week-long festival that draws in grap-fans from across the globe. As exciting as all of the supplementary shows are, for me, WrestleMania always remains the most significant: the grandeur of the national anthem; the first shot of the epic set design; the pageantry of the entrances. For 33 years, this show has forged some of the greatest moments in professional wrestling history, as well as some that would be better forgotten. For one last time, I roll out the best of times, worst of times treatment to examine the granddaddy of them all... 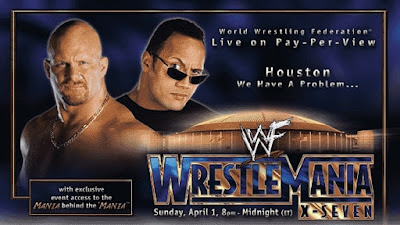 This is the only sane choice for best Mania ever and in my humble opinion is the GOAT of all wrestling shows. Want to know how much I love this card? I had My Way by Limp Bizkit played at my wedding (it wasn’t the first dance or anything but yeah, it was in there).
The first hour is a little slow (Kane in a golf cart though) but business picks up in hour two. Angle vs. Benoit isn’t a classic but it’s much better than it gets credit for while the battle of the McMahons over-delivers more than any match in Federation history. That pop Linda gets when she kicks her old man in the plums…wow. TLC is magical, the Edge-Jeff Hardy spear spot absolute perfection while the Undertaker and Triple H have a spirited tussle. The legends’ battle royale is harmless fun: Bobby Heenan’s last stint at a WWF commentary table the undoubted highlight. And then there is the main event: in hindsight the turn was a bad idea but many wrestling commentators were calling for it at the time. And the match itself was superb. The epoch of attitude era brawling: multiple finishing moves, big near falls and genuinely exciting punch-kick combos, this match is action movie wrestling at its finest. 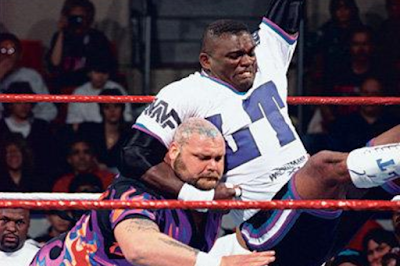 For most fans, WrestleMania 9 usually takes this category hands down but at least the Vegas show is fun to look at. True the matches are at best bang average and at worst Undertaker vs Giant Gonzales but there are good moments: sick bumps in the Steiner-Headshrinker war; respected announcers in togas; Todd Pettingill interviewing clearly pissed up fans. By contrast, WrestleMania 11 is just a bit boring. It emanates from their home state of Connecticut, a metaphor for the play it safe nature of the PPV - and features one good match: HBK doing the J-O-B for his kayfabe foe Diesel. Lawrence Taylor may have been big news in the States (and to be fair he performs pretty well here) but as an 11 year old from the UK, this felt like such a nothing main event and I can’t shake that feeling watching the card years later. Elsewhere Bob Backlund vs. Bret Hart is so poor while King Kong Bundy versus Taker is every bit as mundane as it sounds. 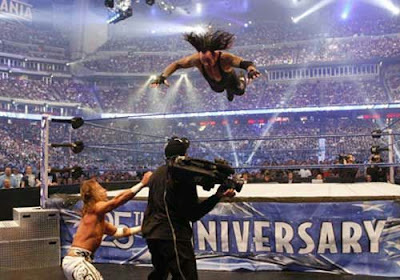 I was fortunate enough to be in attendance in Houston, Texas when the Deadman went to war with the Heartbreak Kid in the greatest WrestleMania match of all time. Walking into the Reliant Stadium, I knew Taker would win a; indeed, everyone I spoke to that day shared that conviction. We knew Taker’s streak was now the WrestleMania storyline and that if it was ever to be vanquished, it would be offered up to someone other than the near-retired Shawn Michaels. However, half way through this incredible, absorbing contest, I stopped believing that: I reacted to near falls as though either man could win, as did the rest of the crowd. This match shut off the “smart” part of our wrestling brains and retreated to the naïve, purity of fandom that we enjoyed as children; we didn’t question the booking of whether Micheals could or should win, rather  we just lived in the moment,. When HBK kicked out of the Tombstone I took pause and glanced around me: some fans were pumping their fists while others were shaking their heads, the emotion as real and raw as any legit sporting event. A father and son sat next to me, the former cheering on Taker, the latter supporting Michaels, shared a gasp, unable to believe the ride they were being taken on. The feeling among the thousands in attendance was mutual. 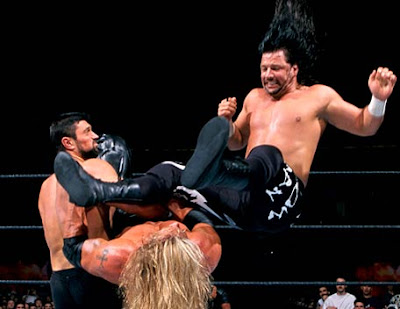 Al Snow is the worst good wrestler in the sport’s history: he is a pretty capable performer but his back catalogue is full of undisputed train wrecks. This is no different: his odd man team with Blackman was entertaining in skits but really struggled in the ring. This clunky mess, played out before a largely disinterested crowd and topped off by a violent attack on a little person dressed as a block of cheese (!), was better than Snow’s previous nadir (Kennel in the Cell) but only just. 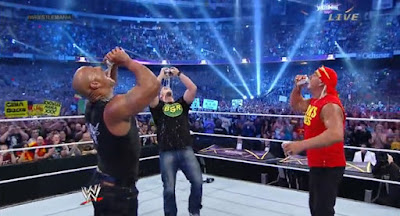 The best promo in Mania history started with two flubs as Hulk Hogan forgot what a) building and b) decade he was in. However, this error provided the base for a great running joke as Steve Austin and The Rock joined him in-ring to provide fans with a real life wrestling Rushmore. Comedy (love Austin’s “great to be back in the Silverdome” line), catchphrases and nostalgia proved a heady cocktail as fans laughed, chanted and cheered through this genuine once in a lifetime moment. Star power never shone so bright.

Honourable Mentions: Hulk Hogan at Mania 4 (he claims that in the event of Trump Plaza sinking, host and future Prez The Donald would abandon all materialistic possessions (!) in order to doggy paddle his family to safety: to illustrate the point, Hogan then backstrokes out of frame); Jake ‘the Snake’ Roberts- Mania 6; Pete Rose laying waste to the Boston sports’ scene at Mania 14. 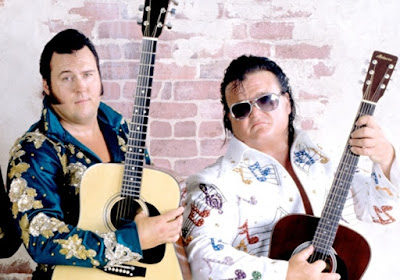 In a bloated show, the last thing the fans in Toronto needed was a terrible tag team wasting their time with a poor, pointless promo, singing not so bad it was funny, just so bad as to be really bad. Especially frustrating was that this whole mess existed simply to set up a Bushwhackers run-in. I love cartoon wrestling but this material would drive away hardened fans, let alone non-believers.

Honourable Mention: Brutus Beefcake at Mania 4: he literally just chats waffle for 30 seconds while staring at his scissors. No clue what he was trying to do here. 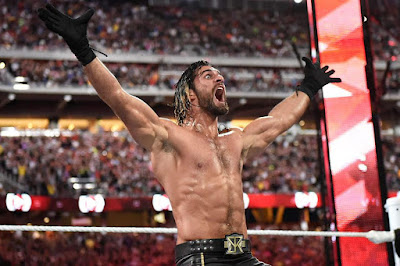 To qualify as a truly effective surprise, the moment in question should feel spontaneous and unexpected but on closer inspection make total sense for all performers involved. Such was the case when Rollins became the first man to cash in his Money in the Bank briefcase at WrestleMania, interjecting himself into a great title bout between Roman Reigns and Brock Lesnar, not diluting the match but adding to it. All three men prospered: for Rollins, the moment was an arrival for him, a chance to close the biggest show of the year title in hand; for Lesnar, the title was dropped but as the odd man out in the fall, his aura was preserved; and Reigns maybe benefited most of all. Had he won, the crowd may have rioted and destroyed his push once and for all; by putting over his well-liked Shield alumni, he did business and lived to fight another day. 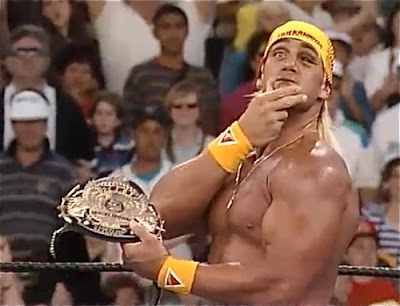 To the above point: if the surprise benefits no-one going forward, it really shouldn’t happen. Take this infamous night in Vegas: Yokozuna cheated to win the world title, a few grains of salt once again proving too much for a main event wrestler to withstand. Hogan, consoling the defeating Bret Hart, soon decided to enact revenge for the Hitman or ‘Merica or something and within seconds, Yoko was beaten and the Hulkster was the new champion. This match, impromptu and unadvertised as it was, didn’t boost buy rates, it made the Hit-man and Yoko look weak and cast Hogan as, at best a shrewd political mover and at worst, a conniving, attention-hungry schemer. Often fans view Hogan’s antics at Manias 6 and 18 as his most self-serving; this was far worse.

To sign off the series, here are some quick hits to cover the great and not so good of ‘Mania history.

Best Promoted Main Event: John Cena vs The Rock- Mania 28 (a year in the making and the biggest money show at the PPV box office).

Worst Promoted Main Event: Triple H vs Chris Jericho- Mania 18 (this was all about Steph- glad they don’t take that approach anymore…)

Worst Opening Match: Tag Team Battle Royale- Mania 14 (I only remember that LOD were in fancy dress and they had Sunny knocking about).

Best Set Design: WrestleMania 29 (an ode to New York: the Statue of Liberty above the ring was something else)

Worst Set Design: WrestleMania 11/13 (these could have just been any old television tapings).

Worst Celebrity Involvement: Akebono (I can never unsee Big Show in a nappy). 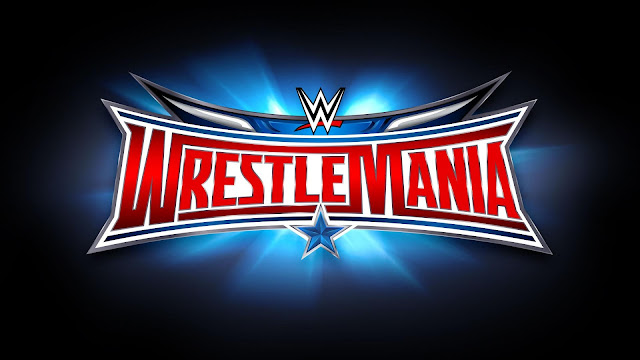