The Non-Fan Review // Kane vs. The Big Show vs. Raven from WrestleMania X-7 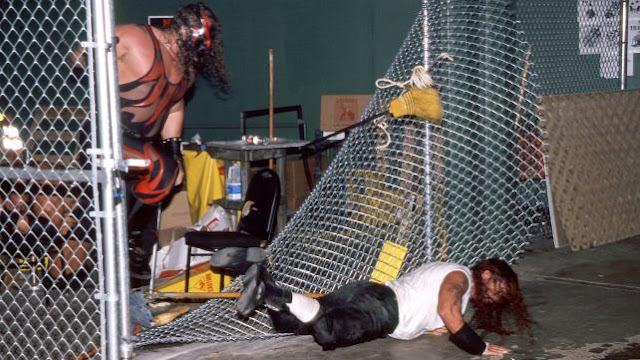 Before we go any further, may I make a small confession?

I absolutely HATE The Lord of the Rings. The books, films, all of it - I’ve always found the thing a slow, self-indulgent plod-athon with occasional bits of violence to tickle up the tedium: a potentially good story dreadfully told.

What could any of this possibly have to do with the Hardcore Championship Match from April 2001, I hear you ask (not unreasonably)? A good question with a surprisingly simple answer: this match is the same as Tolkien’s acclaimed Catholicism metaphor, in that it’s mostly walking at a leisurely pace with the odd smack here and there. Allow me to explain:
A weird echoey remix track of carrion birds plays out loud. “CAW CAW CAW CAW,” sing the raptors, as out strolls current Hardcore Champion Raven. Sadly not the Teen Titan of the same name, this fellow is adorning a white t-shirt, odd facial hair and Fonzie jacket; he pushes a shopping trolley full of wacky props to the ring, as an advert pops up for "WWF The Music, Vol 5”, featuring “What about me?” by Raven. Odd first impression for a 225 pound wrestler to make, having a song with a title that sounds like it was written by a whining 13-year-old girl?
But now for the challengers: pyrotechnics galore as a giant strides out, with girly black hair, flaming red tank top/leggings and a red/black mask like a Power Rangers villain. He also has a glove only on his right hand, maybe he burned it while making muffins? But whatever the case, he is KANE! The commentator starts gibbering incoherently about this 6 foot 10, 326 pound behemoth: “Kane scares the hell out of me and I am a fearless man.”…Isn’t that a bit like saying “he’s the best singer I’ve ever heard and I’m deaf”? Meh, who knows - Raven hits Kane with a wet floor sign just before the DING DING DING can sound, only to be thrown into the corner by the Brobdingnagian.
“WEEEEEEEEEEEEEEELL,” goes the music. Lulu? If only. The music goes all Killer Instinct as our third and final combatant makes his way out: it’s the 500 pound leviathan known as the Big Show! In his black leotard and extremely neat beard, he has inspired the commentator to start singing the Danger Mouse theme: "He’s invincible! He’s invulnerable! Quite possibly, he’s impervious to pain!” Whatever this commentator’s taking, I want some. 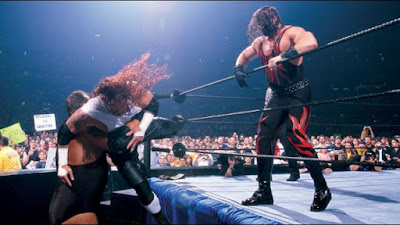 As Biggy (as I’ve affectionately decided to call him) struts his way to the ring, Kane chucks Raven at him; Biggy catches the Lilliputian and shoves his face into his armpit. Quite understandably, this makes Raven thrash about like he’s dying; he is saved by Kane leaping off the ropes onto Biggy! Raven dashes over and grabs Biggy’s enormous fetlock - ONE, TWO… But Kane kicks him away! Whose side is this giant in a gimp mask on??

Kane punches Raven over the soft foam barricade (just like on ITV’s Gladiators), only for them both to run through the crowd, followed by the tiny ref. As they get halfway to the gate through which they all entered, Kane puts Raven into a fireman’s lift, only for Biggy to appear out of nowhere like Hong Kong Phooey and kick the masked meddler in the chest, causing him to drop his mini-foe. Fans mug to the camera as the two massive fighters plus referee make their way to the gate; bizarrely, just as Kane catches up and grabs Biggy’s bonce, the camera cuts to the outside of the crowd. WHY? What is the point of that?
Back to the action and it looks like we’ve missed nothing, they’re STILL slowly making their way over to the gate, only to turn right away from the gate and towards the camera from before, still outside the crowd. Biggy hits Kane in the head, then they walk a bit more. This is a VERY odd thing to witness; again, the camera cuts away just as it looks like something interesting is about to happen. Whoever directed this needs to be taken off whatever he’s currently taking and given whatever the commentator is using.
Kane throws Biggy into a wall, then simply wanders off… It’s as if these wrestlers are bored of fighting and just want to walk about. However, Kane walks straight into Raven, who hits him in the head with a sign! I wondered when his wacky props from earlier would make an appearance. #ThatsSoRaven

Not approving of signs, Kane smacks the prop away and throws his enemy into a wall, ACTUALLY DENTING THE WALL IN THE PROCESS. Surely that’s going cost a bomb to fix, since they’re only renting this stadium?

Before Kane can hit the little birdy again, Biggy once more appears from the shadows like Darkwing Duck and picks up the masked madman, dropping him into a nearby stack of wood.
This leaves Raven to try to limp away from the slow, relentless Biggy. It’s exactly like the end of the first Terminator film; Raven even has Linda Hamilton’s girly hair.
Raven stagily falls down, allowing Biggy to throw him AND the ref into an enclosure and lock the camera out! A slight 50 Shades vibe coming off this part of the match, as gradually this chainlink enclosure prices to be better stocked than your average B&Q.

Very impressively, Kane tears the locked door off, just as Biggy drops a set of shelves onto Raven; as Kane starts hitting Biggy’s enormous head with a fragile block of wood, Raven proves to be supremely ungrateful by wrapping a bit of hose around Kane's neck. “Last I time I help you out, dwarfy,” Kane probably thinks. The mask is too tight for him to do anything more than hum a bit. 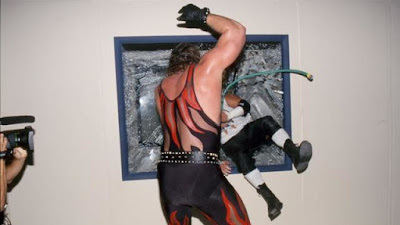 Kane slams Raven into a chainlink fence, then uses the same bit of hose to throw the little ingrate through a window into what looks like a security room! I strangely find this satisfying. Perhaps I’m more evil than I realised.

SURPRISE BIG SHOW KICK! Yep, it’s uncanny how he keeps doing it but he’s managed it yet again, this time literally kicking Kane through a door into a room. Drunk off his amazing ninja kick powers, Biggy takes to opportunity to indulge in Brian Blessed-style enunciation as he picks up kane by the neck: “YA WANNA PLAY? WELL SCREW YOU. I’M GONNA… WRITHING ON THE FLOOR, AAAAAH.” Laurence Olivier, eat your heart out. But NO! Kane has graced Biggy by the neck, causing him to gurn like Sylvester McCoy mid-ferret. They slam each other THROUGH A WALL and end up writhing on the floor; they’re going to need Lawrence Llewellyn-Bowen at this rate, they’re making such a mess of the architecture!
And that it happens. As the two Brobdingnagians are rolling on the ground, Raven calmly walks through the door behind them, tips a table on top of Big Show, gives him a couple of kicks for good measure and then toddles off.

This fight is basically Godzilla vs Godzilla with the occasional input of Godzooky, when you stop and think about it. 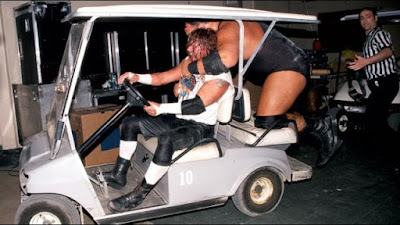 The chase continues as Raven assaults a perfectly innocent security man and steals his golf cart. Somehow able to catch up to a vehicle moving slower than K9, Biggy gets Tweetie in a headlock, causing him to crash the thing ever-so-slowly into a chainlink wall. Bullitt, this is not.
As the pair once more grapple, Kane and the ref get into another golf cart to drive the 30 yards or so to the brawl. Actually, come to think of it - WHERE IN THE NAME OF WICKET THE EWOK HAS THE REFEREE BEEN ALL THIS TIME? More to the point, why doesn’t he do anything when Kane runs near Raven, which somehow makes his leg hurt?
Time for more traipsing about the place as our plucky trio takes turns to punch each other, throw each other into snack tables and chuck wheelie bins at each other. Then the trio climb a ladder, followed by the referee who has somehow picked up a championship belt— SERIOUSLY, IS THIS MAN ONE OF THE ANIMANIACS? HE JUST APPEARS OUT OF NOWHERE AND BRINGS CONVENIENT PROPS OUT OF THIN AIR!

Out they pop from the ladder and they’re back in the arena, having done one giant loop of the place. Well, I hope you’ve enjoyed this tour of a random stadium in Houston as much as I did. More, if that’s possible. 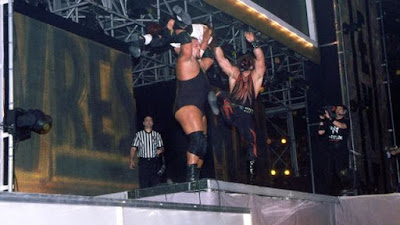 A Glasgow kiss from Biggy knocks Raven down and he lifts the little man over his neatly barbered head. Seizing his chance, Kane kicks the Big Show’s big kidney, causing both of this adversaries to tumble into the the scenery new to the podium! The perfect finishing move from Kane as he jumps off and ground-pounds them both, just like in Super Mario Sunshine!
(On a side note, that is a BLOODY BRILLIANT GAME. It doesn’t get nearly as much attention as it should do.)

Our referee appears on the side of the scenery - he’s also teleportation - and counts ONE, TWO, THREE - Kane is the winner!
So, what have we learned from this experience?
First of all, it’s possible to have a wrestling match without a ring. Moreover, walking around and occasionally hitting each other makes for surprisingly poor television. But at least we can say it’s been tried once.
FINAL SCORE: 2/10
Short people got, no reason...

Next time for Nicholas //
Matt Hardy vs. Jeff Hardy in THE FINAL DELETION 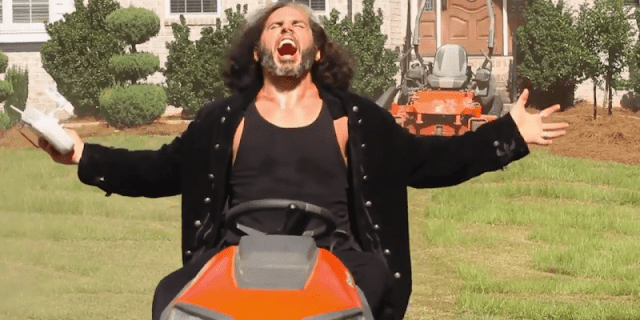