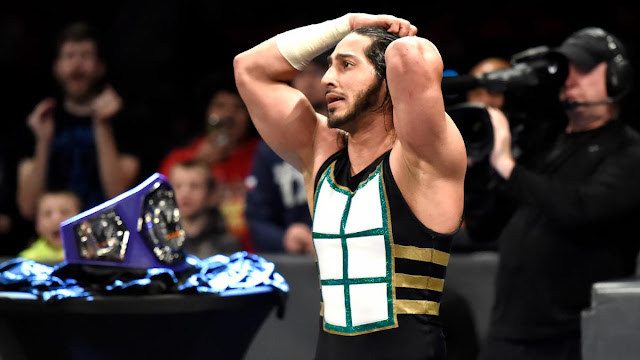 This week on 205 Live saw the conclusion of the Quarter Finals of the Cruiserweight Championship Tournament as Mustafa Ali tangled with Buddy Murphy and Mark Andrews faced Drew Gulak. But how did it all go down in Green Bay? Lets take a look!

Before the match - In one of the best selfshot promos to date, Mustafa Ali let Buddy Murphy know that the most dangerous man in this world, doesn't fight for himself, he fights for others, in what looked like a gritty back alley. - WWE accidentally aired Drake Maverick fluffing his lines and resetting as he told Buddy Murphy that he'd made weight for his Quarter Final In what might have been my favourite match of the tournament so far, Mustafa Ali pinned Buddy Murphy with a crucifix to take his place in the final four. The psychology and storytelling in this one were superb and considering the match didn't go all that long, Ali and Murphy packed it with narrative and worked extremely hard to create a rich and creative match-up. The start was all well and good, working with the idea that Ali was thrown by Murphy's pace or power with Murphy outmanoeuvring the Illinoisan and then nailing a wicked lariat, but it was once Ali changed tactics on focused on the Melburnian's left arm that the match truly hit its groove. The original 450 splash onto the arm as Murphy tried to pull himself up using the ropes looked brilliant and finally bought a crowd that had previously been shouting amongst themselves previously into the match as they got behind the former DREAMWAVE talent. The two then crammed in a number of beautifully done moments, using the arm as a catalyst, including Murphy being unable to hit a vertical suplex because of the arm, so instead dumping Ali to the outside and nailing a Tope con Giro. Murphy's selling was spot on and the injury really came into play down the stretch as despite coming off on the better end of a hard strike sequence, Murphy was unable to hit Murphy's Law, then attempted a backslide, only to be unable to keep Ali down, because of the injury, before Ali quickly took advantage and trapped the arm in a crucifix to get the win. The finish was right up my alley and each step along the way was done beautifully. It was great to see some more depth out of Mustafa Ali, who managed to fit his agility-based offence into a "working a body part" type story, working as a nice mirror image to his match with Gentleman Jack Gallagher a few weeks ago. Based on this display, both these men should have bright futures on the purple brand.

Before the match - Drew Gulak revealed he hasn't opened Microsoft Office in weeks in the saddest turn of events this year. 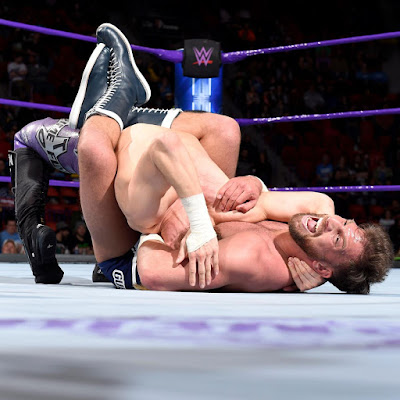 A dragon sleeper saw Drew Gulak advance to the semi-finals of the Cruiserweight Championship Tournament, with Mark Andrews tapping out, after a good match. This was a much better showing from the ATTACK! star, who got to show off a much broader range of offence, whilst selling well for Gulak's brutal strikes. The match was a relatively standard technician vs. high-flyer bout, with a couple of nice highspots to accent the narrative. Gulak's reversal out of a Code Red and the rana off the apron from Andrews stand out as highlights, whilst the two also included a number of their signature spots in what was a short match for this tournament. I think that the briefness was the thing that ended up holding the match back from being one of the more memorable contest in the tournament, as the guys didn't have enough time to really explore Gulak's renewed viciousness and build upon his brutal victory over Tony Nese three weeks ago and whilst there were teases throughout like Gulak going to throw Andrews into the announce table, it never really developed into what it could have been with another five minutes. This was a good match and the nature of Gulak's victory continues to build his momentum in the tournament, but I feel that it had the potential to be very good to great with a little more time and perhaps a little extra smoothness as well in places.

Drew Gulak vs. Mustafa Ali will happen on the 20th March episode.


Before the match - Drake Maverick explained to Hideo Itami & Akira Tozawa that he'd put them together as a tag team, because he thinks they can bring the best out of each other. 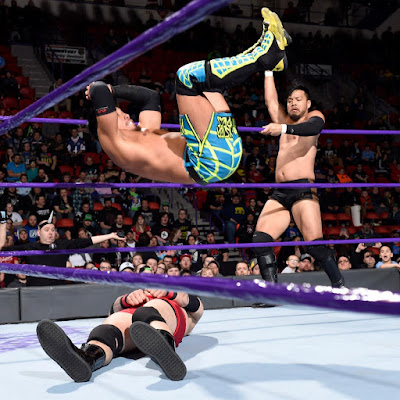 A quick squash victory for the newly formed Hideo Itami & Akira Tozawa tag team over Nemeth Alexander (former FUW wrestler James Alexander) & Scott James, with Tozawa pinning James with a diving senton. This was a solid showcase for both Itami & Tozawa, with Tozawa hitting a wicked backdrop driver and Itami with a nice release fisherman's suplex as well. We've seen a few teams begin to form over the last few months on 205 Live, so perhaps WWE is considering introducing a Cruiserweight Tag Team titles, which should allow for more storyline depth on the show.


- Cedric Alexander cut a generic sit-down promo, ahead of his Semi-Final next week, claiming he'd be going to WrestleMania etc.

- We saw Roderick Strong working hard in the Performance Center as he prepares for his Semi-Final match next week. 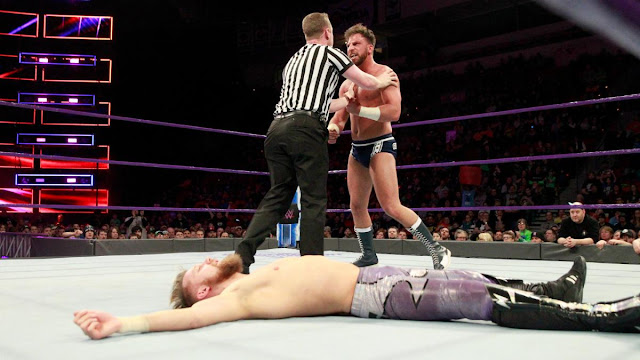