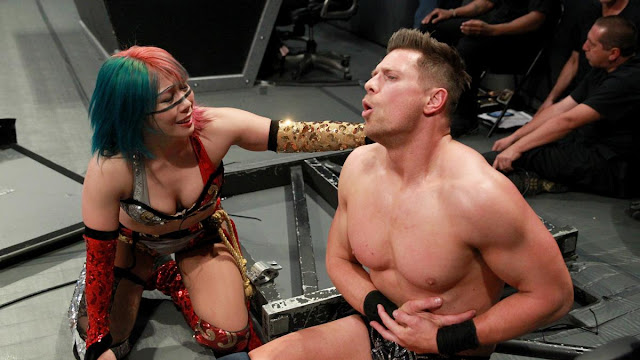 It was time for the semi-finals to begin on this week's Mixed Match Challenge, as Asuka & The Miz teamed up against Braun Strowman & Alexa Bliss for a spot in the final in two weeks. But was it any good? Here's our review!


Before the match - Asuka reminded The Miz that her streak was on the line tonight, with Miz insistent that it was "their" streak - Braun Strowman and Alexa Bliss promised to go all the way...in the Mixed Match Challenge. 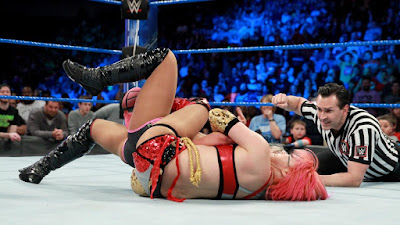 Considering Asuka's streak was supposedly on the line, it was to the surprise of very few that Asuka & Miz advanced to final of the Mixed Match Challenge over Braun Strowman & Alexa Bliss, with The Empress of Tomorrow tapping out the RAW Women's Champion with the Asuka Lock at the end of another typical MMC bout. The match was strongest at it's opening and conclusion, with the bout getting a little lost during it's middle third, relying on the idea that there was a romance between Strowman and Bliss and doing very little else. The random tease of a kiss mid-match worked in order to set up Strowman going nuts at Miz for breaking it up, but beyond being a plot device, it made very little sense to have it happen when it did. Having both Miz and Bliss tag out repeatedly in order to not face their more imposing opponents was a much better idea, played well by all four, before Miz got clattered with Braun's wicked front dropkick (No Corey, I shall not call it the Tyrannosaurus dropkick). This would only be bettered by a wicked series of action at the conclusion, with Asuka and Bliss working much better together than they did on RAW the previous night, building to a double knockout spot before Strowman lost his head and shoulder barged the fuck out of Miz, sending both through the barricade. The streak gimmick was used effectively with the crowd buying into a series of pinfall variation near falls from Bliss, including one very long two count, with Michael Cole playing a strong supporting role on commentary, before Asuka swiftly reversed Bliss's DDT into the Asuka lock to pick up the win. It would seem we're heading to an Asuka & Miz vs. Charlotte Flair & Bobby Roode final, which just days before Flair and Asuka clash at WrestleMania could prove an exciting possibility in two weeks time.


- Daniel Bryan was stretchered to the back following the assault from Kevin Owens & Sami Zayn on SmackDown Live.

- We found out that Sasha Banks & Finn Balor had won the second chance fan vote and would face Charlotte Flair & Bobby Roode in next week's semi-final. 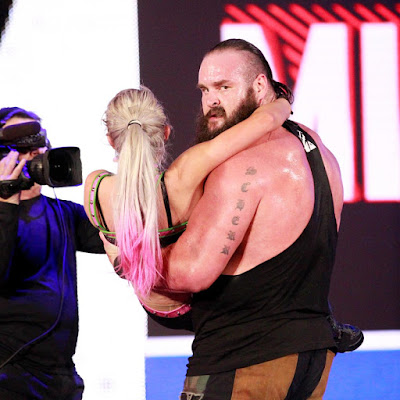