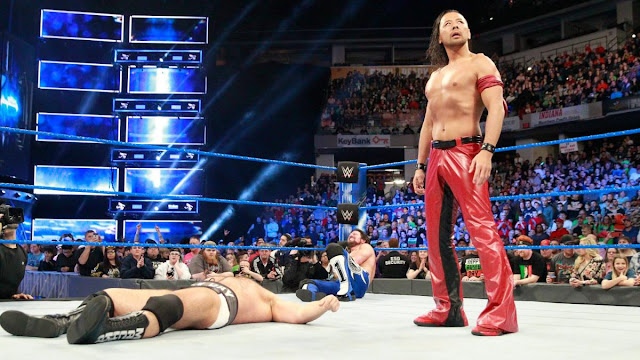 2 days after Fastlane, WWE's SmackDown brand set its sight on WrestleMania. AJ Styles and Shinsuke Nakamura came face to face before Styles took on Rusev, Shane McMahon had an announcement to make about WrestleMania, Randy Orton celebrated his first WWE United States Championship before Jinder Mahal faced former champion Bobby Roode, The Bludgeon Brothers challenged any fit members of The New Day and The Usos to a match, SmackDown Women's Champion Charlotte Flair shared a ring with WrestleMania opponent Asuka and "Ms. Money in the Bank" Carmella went one on one with Naomi. But was the Indianapolis show any good? Lets take a look! 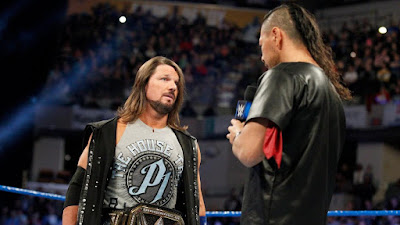 A solid opening segment between the competitors in SmackDown's main event at WrestleMania, as Shinsuke Nakamura interrupted WWE Champion AJ Styles. We didn't really learn a lot from either man's promo, but it was cool to see the two finally share the ring, after their WrestleMania match had been rumoured for so long. In fact, I think it was the fact that we've waited so long to see it that actually managed to carry the segment, because the crowd was super hyped for it, with duelling chants and all that jazz. Styles' promo went over some old ground about his road to get to WWE and what it means to go into WrestleMania as champion, whilst Nakamura's was limited to explaining his dream was to knee Styles in the face and become champion, whilst the crowd "What"'ed him because English isn't his first language. The interruption by Rusev just as things looked to be escalating between Nakamura and Styles was well-placed and should help to rise the interest in the WWE title match at WrestleMania a little more as we begin to anticipate what the clash might look like when it finally happens. 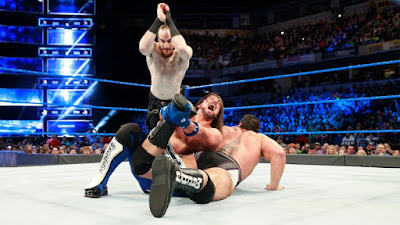 AJ Styles and Rusev battled in a good match, until Aiden English interfered to give Styles the disqualification win as Styles looked to locking in the Calf Crusher on Rusev. This a physical clash with slight elements of power vs. speed in places, but was mostly centered around the pairs various strike based offence, with plenty of forearms and kicks in this one. The best stuff of the match was a minute or so that was used to build for the Ushigoroshi from Styles, with the Phenomenal One attempting the move three or four times, before a Pele Kick would eventually allow him to it, only for Rusev's weight across Styles' knee meaning he couldn't get a pinfall. This was a nice example of making a signature move mean something and there was even a good near fall thrown into the mix when RuRu dropped off Styles' shoulders for a Roundhouse Kick that looked super snug. The little sequence before the interference was also quite lovely with Styles going for what would have been an impressive Styles Clash, Rusev escaping and going for the Accolade and Styles reversing and eventually being able to roll-through into a Styles Clash. A bit more time and bit more importance and these two could have a great match together. The finish seems to be to extend the feud a little and pad sometime for WrestleMania, because of what would follow.

After the match - Rusev & Aiden English attempted to beatdown AJ Styles, before Shinsuke Nakamura would make the save with a pair of Kinshasas, I guess we'll see Styles & Nakamura vs. Rusev & English next week - Backstage, Shinsuke Nakamura told AJ Styles he would protect him til WrestleMania so he could beat him with "Knee to face"


Before the segment - Sami Zayn blamed Shane McMahon's obsession with Kevin Owens for him not being WWE Champion right now, before promising to never be guilty by association to Owens ever again. - Kevin Owens replied to Sami Zayn, blaming Shane McMahon and calling Zayn a liar and delusional. 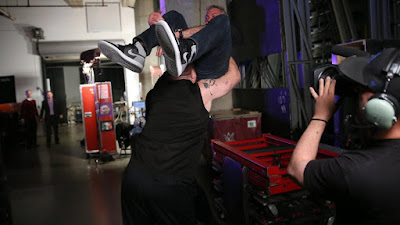 A surprisingly violent angle to close the show as Sami Zayn and Kevin Owens' hatred for Shane McMahon united them once more as they laid waste to the SmackDown Commissioner, moments after McMahon had announced he was taking time away from the position and placed Owens against Zayn at WrestleMania. McMahon's promo was a little rambling, seemingly thinking out loud as he wondered whether he crossed the line at Fastlane and honestly lacked the emotion that it needed to be genuinely interesting. However, once we got past McMahon's detached rhetoric and we got two performers out there in Kevin Owens and Sami Zayn the segment was energised and became a fascinating and uncomfortable piece of television. Owens & Zayn taking out referees (including a ridiculous bump to the floor by Ryan Tran) got a great shocked pop from the Bankers Life Fieldhouse and the vicious assault including a Pop-up Powerbomb and McMahon getting sent into the post with a steel chair around his neck, grabbed you and made you pay attention, because it felt different to the usual WWE beatdown. But the most bracing moment came when Owens & Zayn began dragging McMahon up the ramp and into the back, with an increasing sense of foreboding that some real shit was about to go down. That real shit was a nasty looking powerbomb onto some big hunk of metal, that looked super painful to take for McMahon. If you look past the fact that no one came to McMahon's aid apart from a few referees, this was a great angle, that opened up a number of questions to be answered over the next three weeks. How will McMahon look to gain his revenge? What does this mean for Owens & Zayn's friendship, that appeared to be in tatters? Will we get Owens vs. Zayn on the biggest stage? 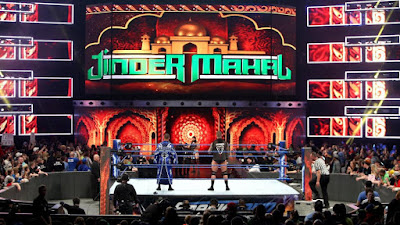 A thoroughly unnecessary segment here, as no one said anything and Jinder Mahal continued to be a drag on the blue brand's product. Out of the three promos, Randy Orton's had the most behind it as he gave Bobby Roode props after their US title match, whilst also putting over what it meant to be a grand slam champion. Roode's promo revealed that he wanted his title rematch at WrestleMania, so at least there was that development, I suppose, even if it easily could've been handled in a thirty second backstage interview. Then we get to Jinder Mahal, who manages to make me want to turn off the TV every time he pops up, especially during this storyline. Why is his character that of a school boy? The quality of the writing for Mahal here has been especially poor, but he's not exactly blessed with great promo skills either. This segment saw Mahal try to stir the pot again between Orton and Roode, by mentioning that Roode had held the US title before Orton and that was something Orton was never going to change. Why the fuck would 13 time World Champion Randy Orton give a fuck that Bobby Roode had held the United States title before he did? Get in a bin, Jinder. Get in a bin, whoever "wrote" that promo. 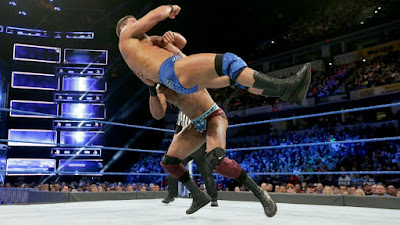 Not much to talk about in this match, as Jinder Mahal managed to beat the former WWE United States Champion, to supposedly set-up a triple threat at WrestleMania, after Sunil Singh had provided the distraction. There was one nice sequence here with the pair reversing each other's signatures, with Roode managing to counter a counter with a sunset flip for a decent near fall.


After the match - Randy Orton gave Jinder Mahal an RKO.

Before the match - Big E & Jimmy Uso cut a pair of very good promos about the Bludgeon Brothers attack at Fastlane, as they spoke about Harper & Rowan had taken away from them  and promising to bring the attack to the pair tonight - Absolute chaos before the match began as Big E & Jimmy Uso attacked Harper & Rowan as they tried to take their jackets off, but the Bludgeon Brothers were able to take control later on despite Big E & Uso holding steel chairs. 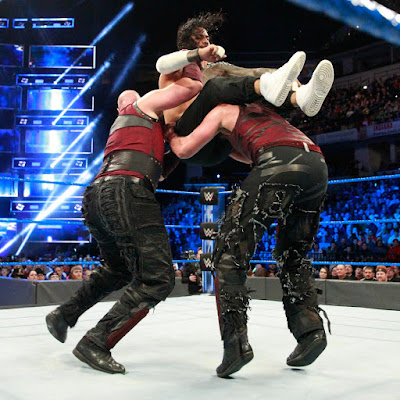 The match itself was absolute domination from The Bludgeon Brothers, as they controlled the whole match, before sending Big E into the steel steps and pinning Uso with a Harper powerbomb.

After the match - The Bludgeon Brothers went back after Big E, with Harper throwing E into a Rowan crossbody on the floor. 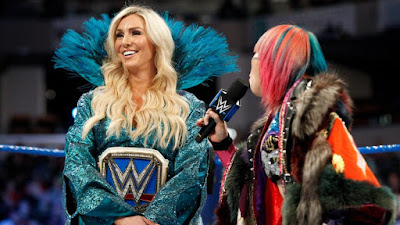 Similar to the Shinsuke Nakamura and AJ Styles segment earlier in the night, this segment held the attention because it had been so anticipated. The two women arguably did a better job than the men did with their promos, but this was more about introducing the match scheduled for WrestleMania, rather than anything too complex or creative. Flair's promo in particular was laden with cliches, like "iron sharpens iron" and "I've never anyone like you, but you have never faced anyone like me", which she performed well, but it was hardly to get anything excited about. Asuka's performance was a step above, as she overcame the language barrier and had the crowd reacting nicely as she explained she "bows to no one". Having the two interrupt by Randy Orton as he came to the ring for his match was a strange decision and gives out the wrong signals regarding how WWE views its women's division. Had Randy had enough of the women talking about their match and decided to hit the ring so he could talk? I get that WWE needed a way to finish the segment without the women coming to blows and it would've been weird to have just cut away without any action, but was this the only way to reach that point? I'm not convinced.


Naomi vs. "Ms. Money in the Bank" Carmella

Before the match - Carmella announced that she'd be taking part in the Fabulous Moolah battle royal at WrestleMania, declaring herself the modern day equivalent to Moolah...perhaps not the person you want to be comparing yourself to, Mella. Carmella picked up a big win over Naomi in a disappointingly short match, that the pair managed to fill with physicality and a couple of really nice sequences. Carmella repeatedly ducking roundhouse kicks, only for Naomi to counter a forth duck with a massive knee to the face was particularly well done, before a creative finish was Mella trip Naomi as she went for a springboard, before hitting a hair-aided rope-hung neckbreaker for the win.


- Kid Rock is going into the WWE Hall of Fame and we get the same look at his relationship with WWE that was aired on RAW.

- Rusev & Lana and Bobby Roode & Charlotte Flair cut promos ahead of their Quarter Final match in the Mixed Match Challenge. 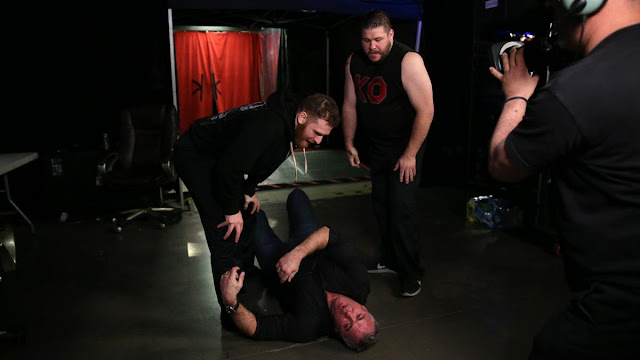