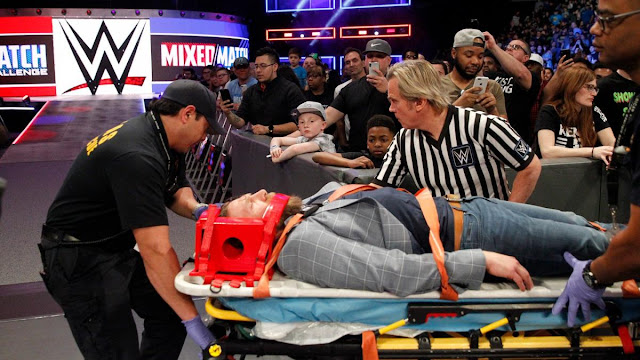 With three weeks until WrestleMania, this week's SmackDown was perhaps the most important episode on the road to WrestleMania and will almost certainly prove to be the most memorable for the majority of the fanbase. This week saw Daniel Bryan announce his return to in-ring competition and call out Kevin Owens & Sami Zayn for their assault on Shane McMahon last week, Charlotte Flair and Natalya renew their rivalry, SmackDown Tag Team Champion Jimmy Uso go one on one with the Bludgeon Brother's Harper, Shinsuke Nakamura face Rusev in a rematch from Fastlane and Jinder Mahal talk about being added to the United States title match at WrestleMania...but was it any good? Here's our review. 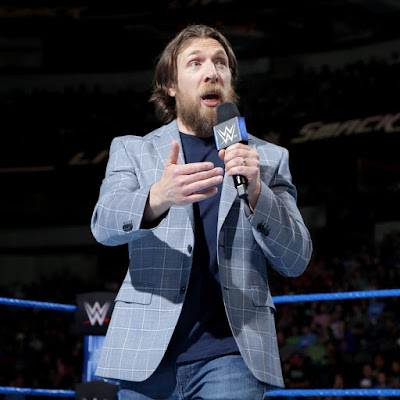 If it's possible to feel all of the emotions at the same time, then that's exactly what I experienced whilst watching Daniel Bryan speak about being able to wrestle again on SmackDown this week. Honestly, Bryan could have come out and said absolutely anything and everyone would have been over the moon because he can wrestle again, but what happened on 20th March was so much more than that. Obviously this being a very real situation helped a lot, but listening to the emotion in Bryan's voice as he talked about how his wife, Brie Bella, had helped him to keep fighting and to keep pushing to get back in the ring, as well as the passion with which he talked about professional wrestling was wonderful and left me somewhere between being one big pimpley goose and a human tear. Whatever happens next is a bonus for me, as the story of Bryan's return is strong enough to drive multiple storylines for years and I'm not sure it will ever be matched. Also all the crowd pointing at the WrestleMania sign when Bryan said he didn't know when he'd get to wrestle his first match might be my favourite thing that has ever happened inside a wrestling arena.

After the segment - Charles Robinson congratulated Daniel Bryan on his return, before Dolph Ziggler told Bryan that he couldn't wait to beat him - Daniel Bryan was informed that Kevin Owens and Sami Zayn had arrived at the building. 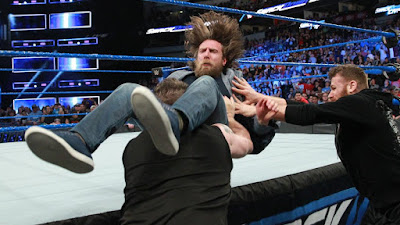 Wow, what a rollercoaster this segment was, moving from comedy heat for Kevin Owens saying "everyone's dumber in Texas" to a vicious assault on Daniel Bryan on his first night back as an active competitor all within the space of ten or fifteen minutes. There was a lot packed into the fifteen minutes, but the segment essentially boiled down to Owens & Zayn assaulting Bryan because he was forced to fire them for attacking Shane McMahon on last week's episode, but because of Bryan's lengthy absence from anything resembling physicality it ended up being so much more than the sum of its parts. Watching Bryan nailing running dropkicks in the corner, like he'd never been away became an emotional experience the likes of which I never thought I'd experience watching some hit a dropkick or two, whilst the beatdown from Owens and Zayn that came after the pair had regained control got a great deal of heat as they threw punches at the former WWE World Heavyweight Champion. The conclusion with Owens hitting a powerbomb onto the apron was difficult to watch, a good piece of booking to throw doubt over Bryan will be able to compete at WrestleMania, with the whole picture involving the three and Shane McMahon being wide open at the conclusion of the show. A special note on Owens performance here, as as always Kevin's attention to detail was wonderful and him screaming repeatedly, showing confliction and frustration with his action was a lovely touch that added to an already brilliant segment.


Before the match - We got a hype package for Asuka, who seemingly isn't on the show tonight - Natalya tried to wind up Charlotte Flair, saying she was scared about facing Asuka at WrestleMania, with Flair agreeing to a match with Natty later on the show. 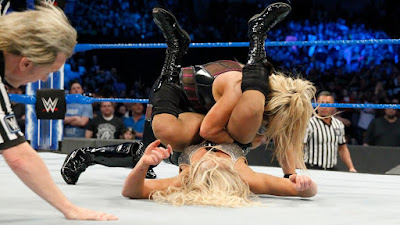 An intriguing development at the end of a good match between Natalya and Charlotte Flair saw Carmella attempt to cash in her Money in the Bank briefcase and whilst Flair nailed Carmella with the Queen's Boot before the cash-in could occur it did allow Natalya to pick up a surprise victory with a school-boy roll up. I'm not quite sure how this factors into Flair's match with Asuka at WrestleMania, but its at least WWE trying to do something different on SmackDown, rather than what could have been a paint-by-numbers victory for Flair. The match itself took a while to get into, mostly because there was a feeling that I'd seen it all before, with the having competed in eleven TV singles matches in the last two years, but the build towards the interference featured some lovely action between the pair. Natalya pulled out a gorgeous spinning sit-out powerbomb, but the highlight was a superb sequence involving the figure four leglock, that would conclude with Flair holding onto the move whilst hanging outside of the ring, after the two had rolled to the ropes. I would suspect we could see Natty & Carmella vs. Flair & Asuka at some point over the next two weeks, with Natalya's victory perhaps being used to make her Asuka's first challenger after the Empress wins the belt at WrestleMania.

Jimmy Uso (with Jey Uso) vs. Harper (with Rowan)


Before the match - The Usos cut one of signature fiery promos, promising to not lie down when faced with the threat of the Bludgeon Brothers as they looked for their first match on the main card of a WrestleMania. 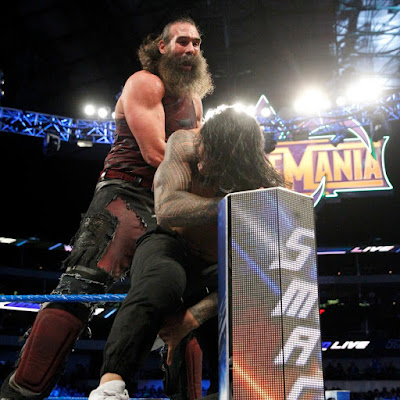 The match was a fairly straight-forward affair with Jimmy Uso able to stay in the match by using his speed, before Harper put him away with a pretty weak looking lariat. The match was raised past a regular squash thanks to a stellar near fall from Uso, which saw the SmackDown Tag Team Champion able to dodge distraction from Rowan, before that same distraction allowed for both Usos to hit superkicks for a long two count on Harper 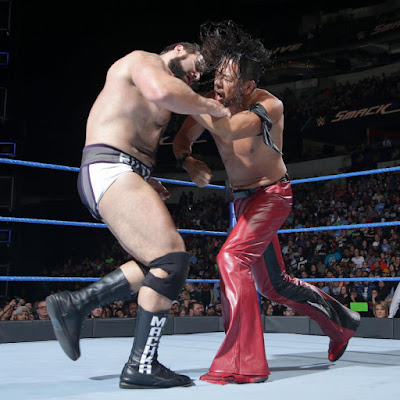 Whilst not as good as their clash at Fastlane, Shinsuke Nakamura's victory over Rusev with a roll-up still provided a solid slice of television wrestling. The match ended up coming up a little short time-wise, with only around five minutes airing on TV, but still got a few decent moments and sequences in there. A lot of it was either going over ground covered in the PPV bout and using a couple of signature spots like the "Come on" thing that Nakkers does, but there was also a nice forearm sequence and a surprising amount of dominance from the Bulgarian Brute, including a near fall off a big kick after Nakamura escaped the Accolade. The finishing sequence was very well done, with Nakamura missing a couple of roundhouse kicks, before going for his rolling crossarmbreaker and then being able to reverse a Rusev roll-up (major alliteration scenes) to pick up a straight-forward victory. Not quite good enough to go out of your way to see, but enjoyable if you're a regular watcher of the product nonetheless.

After the match - Rusev & Aiden English assaulted Shinsuke Nakamura, with AJ Styles taking so long to make the save from the guest commentary position that Nakamura ended up being able to fight off both of his attackers - Backstage, Shinsuke Nakamura told AJ Styles that he didn't need his help and that he'd beat him at WrestleMania with a "knee to face" 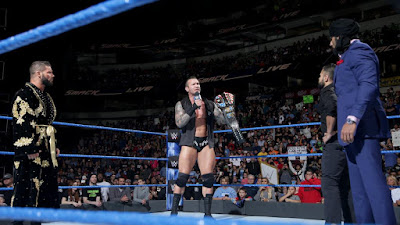 More of the same from Jinder Mahal, Bobby Roode and Untied States Champion Randy Orton this week, after Mahal had addressed being added to the US title match at WrestleMania. Honestly, I was over this storyline about a month ago and I'm looking forward to being able to move passed it in April, because the booking continues to be lazy, the writing continues to be juvenile and the performers continue to look like they'd rather be doing anything else (well, Roode and Orton do, I suppose Mahal is just buzzing to still be riding the wave of his awful WWE title run). Mahal left Sunil Singh to Roode & Orton, with Singh taking DDTs rope-hung and Glorious, before Orton and Roode tried to hit their finishers on each other and still nobody gave a fuck.


- Baron Corbin squashed Tye Dillinger in a few minutes, with the match going a little longer because Corbin botched his own finish and they had to do it again.

- The "Hungry for Mania" moment was the entirety of WrestleMania I. 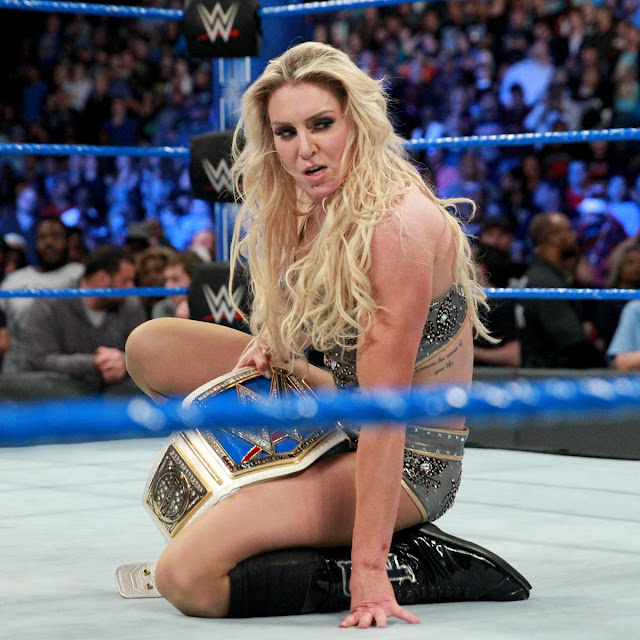