After last week's interiview with Leah Von Dutch, it's time to get all Hall of Fame, with James J. Dillon. 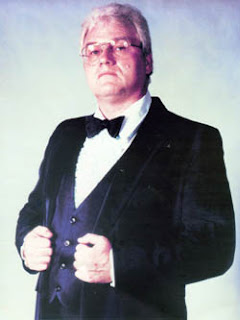 I started as a wrestling fan at about age 15.  I was a referee in Eastern PA and NJ for about eight years.  I started to wrestle part-time 1968-1970.  In 1971, I started full-time as a wrestler in Charlotte, NC, months before turning 29.  I managed the Mongolian Stomper in October of 1975.  I continued to manage and wrestle until I retired from the ring in January of 1989, though best remembered as The Leader of the Four Horsemen (certainly the highlight of my career), I had over 3200 actual wrestling matches during my career including holding several titles.


2. You experienced a number of different roles within the wrestling business how did you enjoy each role and what was your particular favourite?

I enjoyed all aspects of the business.  Because I was a fan, I was able to step in and referee one night when no referee showed up.  During the time I continued to referee, I was the third man in the ring for many of Bruno Sammartino's epic championship battles. That experience helped me be a better wrestler when I was given the opportunity.  I think I was a better manager because I had been a referee and wrestled.  When I retired I continued my career at the executive management level because of all the years I had been a referee, wrestler and ringside manager.  The combined experience over a lengthy career gave me a foundation to be involved and successful in creative and talent relations for the two major wrestling promotions.  Though my years with The Four Horsemen would be hard to top, my initial dream was to become a professional wrestler and maybe someday to appear myself in MSG (Madison Square Garden) where I had gone as a fan.  In 1984, I had one match in MSG, so, I lived my dream.  I guess for that reason it had to be my favorite moment.

3. If you were managing talent today, who would you like to be involved with and why?

The business has changed so much, that there really hasn't been a role for the typical manager.  That changed with the arrival of Brock Lesner.  Brock would be the only one that I would have had interest in managing because he is a real monster.  However, Paul Heyman is doing an excellent job as Lesner's manager.  I have the utmost personal and professional respect for Paul Heyman.  Paul and Brock have a lengthy relationship and are friends, and I doubt that I could have done as good a job as Paul is doing right now.

Wrestling has changed.  I was a product of the regional territory days were we appeared often weekly in small population centers compared to only the major arenas these days on a sporadic basis.  Wrestling today has in many ways become a novelty attraction much like the Harlem Globetrotters are to basketball.  Yet, the WWE has become a successful global brand.  It is hard to argue with success.  At the same time the current product doesn't seem to have the diverse characters that were a big part of the success of wrestling in the day.  There was more attention to logic and continuity with a lot of emotion ... much like an ongoing athletic soap opera.  The NWA World Heavyweight Championship was very prestigious and when the title changed hands (which didn't happen very often) it was big news.  Those were great times and I cherish those memories.


5. Where can our readers catch you next and will you be making your way across the pond to the UK anytime soon?

I suggest that everyone check out www.jjdillon.com which is my personal website.  There are lots of pictures and information including details about my autobiography and how a fan can obtain a signed copy of the few that remain.  I am an active lifetime member of Cauliflower Alley Club and I am on the board of the Professional Wrestling Hall of Fame and Museum. Which is a one of a kind place for the preservation of our history.  I still make the occasional personal appearance and in August I will be a guest of the Mid-Atlantic Legends Fanfest in Charlotte, NC.  It has been a number of years since I last visited the UK.  I would love to come back one of these days.  I enjoy any opportunity to visit with wrestling fans.  Without our great fans there would never have been a J. J. Dillon, Four Horsemen or professional wrestling.  I never miss an opportunity to say 'Thank You' one more time!

We'd like to thank J.J. Dillon for spending the time to answer our questions, we hope you enjoyed this interview as much as we did conducting it.
You can find us on Twitter @ATPWrestling and Facebook by searching for Across The Pond Wrestling
Posted by Unknown at 19:30