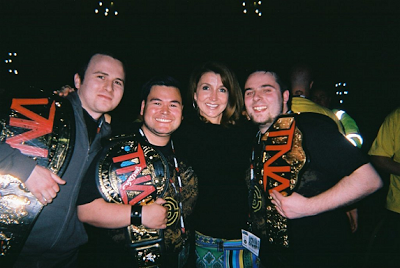 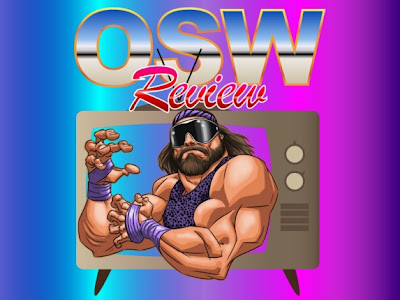 I have four older brothers, and our household was a wrestling household. Some of my favourite memories are watching wrestling with my family - the earliest I can remember vividly were around WrestleMania V - The MegaPowers Explode! McMahon's WWF had such a diverse collection of colourful, intense characters in interesting stories, it was impossible not to love. I have an odd view on wrestling since my brothers would prefer heels, especially Mr. Perfect, Ric Rude and Bobby Heenan, but as a kid I still loved the standard good guys like Hogan, Warrior and Tornado - so I grew up loving both. Kayfabe never really lived for me as they'd make sure to point out telling signs that it was choreographed, e.g. the superplex (where both men blatantly work together to perform the move!). They'd gravitate to whoever's the most entertaining and that's something I still do today.

2. Tell us a little about the Old School Wrestling Review and how that came about?

Our trio had been writing weekly WWE & TNA reviews for a few years on Bebo (basically myspace for Irish, English & New Zealanders) before appearing a few times on an Irish wrestling radio show. It was a huge rush, but also we narcissistically thought we could do a better job! Around the same time, my brother had given me a box of WWF Tagged Classics DVDs (each featuring a pair of old WWF events) and I thought I should put them to good use. We talked about wrestling for hours anyway, so why not record it?

I'll admit our show is quite selfish - it's the show I wanted to watch but didn't exist, so I thought to make it myself. I love videogames and TV shows (like the Simpsons) and both readily influence the show. I wanted to make OSW Review as different as possible to other wrestling podcasts out there: Others do current wrestling, we'll do retro. Others cherry-pick events, we'll go chronologically. Others Skype, we'll do ours in person...even down to small things, like talking in current tense rather than past tense. Being Irish helps our uniqueness. Our big kicker was that whilst others would only be audio, we'll add video.

Sometimes I'd listen to WCW reviews multiple times and still not know what's going on - so why not show people what we're talking about and follow along? So that's what our show became: a roundtable review podcast cut to video footage of the show. Doing video also gives us another avenue for visual gags, photoshops and the like. Something integral to the show is being positive, having fun and enjoying wrestling, good and bad. Fill in the storyline blanks since the last PPV, throw in relevant backstage scandal and make parallels to today's WWE and you have our show. I'd hope when people watch our videos, it's like they're watching the PPV with their friends and having a laugh. 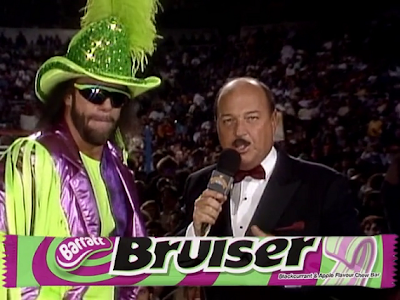 Macho Man's flamboyant outfit's lead to a game called "What Bar is He?" on the show.

Comparing modern WWE with its early days is a lot of fun. Today's in-ring quality is FAR superior to the 80s & 90s. When you have to sit & watch the Bushwhackers stall & work the crowd for 12.5 minutes, you'll be clamouring for another Kofi Kingston/Miz rematch! The depth of strong, colourful characters with unique, entertaining promo styles in the Hulkamania Era is staggering. I don't think many WWE fans will fondly remember, say, Big Daddy V or Ken Kennedy from a few years ago, but most old-school fans will instantly recall storylines/catchphrases of say, The Million Dollar Man or Jake Roberts. These wrestlers had to draw in their respective territories before working for Vince, so their timing, promos and wrestling ability was already there. With kayfabe in full effect, crowds were really much happier, louder and would pop for basic moves by today's standards.

It's refreshing to see a time before the "cool heel" that the nWo popularised, when the heel-face divide was clear and they'd elicit the intended response from the crowd. A huge factor adding freshness to old shows is only having 4 PPVs per year, and with their competition (WCW) still afloat, it meant that every PPV brought an influx and outflow of ready-made talent. I miss having prominent names arriving in the company and shaking things up (like Ric Flair joining WWF in late '91), as opposed to today, watching wrestlers basically starting from scratch, like Antonio Cesaro. Since the average age of Hulkamania Era stars is about 7 years older than today, they command more presence and respect. Fans today would consider taking a swipe at Randy Orton, The Miz or Dolph Ziggler, but I doubt they'd dare swipe at Ultimate Warrior, Road Warrior Hawk or Bad News Brown. It's like old-school wrestlers are tough guys playing cartoon characters, and today's wrestlers play tough guys on TV.


4. What are your Top Three matches of all time?

First: Hollywood Hulk Hogan vs. The Rock (WrestleMania X8) - my childhood hero vs. my teenage hero.

OSWreview.com is our hub for all things old school, and our Summerslam '92 episode (from Wembley Stadium, London!) just dropped last night! Thanks, and remember, a winner is you!