After last weeks interview with OSW Review Host, Jay Hunter we're back this week with our very first Canadian. It's Leah Von Dutch. 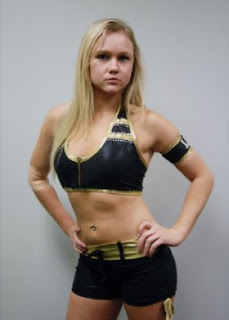 When I was 12 years old I began watching wrestling and what really drew me into the sport was when Trish Stratus and Lita debuted. Trish was a blonde Canadian so I could relate with her right away and Lita was the cool high flying chick who always took risks. Once their feud started I was memorized and knew that I wanted to wrestle when I was older. I first got into wrestling in 2011 when Classic Championship Wrestling was looking for ring announcers. I applied and got the job but the promoter Jay McDonald knew I wanted to wrestle right away. I started to train there with Dangerboy Derek Wylde but after conflicting schedules I was unable to steadily train and that is why I eventually applied for the Edgucational Essay contest and won free training at Squared Circle Wrestling through WWE's Adam "Edge" Copeland. The rest is history from there.

2. What are your Top Three matches of all time and why?

My Chikara match vs Sara Del Rey. This match is the very first match where I felt safe with a wrestler and knew I had nothing to worry about. Before this match I was always terrified of going out in front of an audience but something clicked for me in this match...it was like a lightbulb went off or something...this is the first match where I felt confident in my ability as a wrestler and was able to hear how the crowd reacts.

My match in Florida for Shine Wrestling against Santana. I love this match because it was my first iPPV that I  to wrestle on. Not only that but it was also one of the first times I was able to be a heel in a match! I find being a heel very natural to me and was just having so much fun being a jerk. Santana and I have very similar styles and we also have great chemistry so this definitely is one of my favourites!

My last match in the UK at AWW vs Shanna. This match stands out to me because it really pushed me out of my comfort zone and made me go above and beyond what I thought I was capable of doing. The crowd was amazing (over 400+ people) and there was no better way to end my UK tour.

3. What's your opinion of the current state of women's wrestling in WWE, TNA and elsewhere at the moment?

I get asked this question quite frequently and I always say the same thing. Going back to when Trish and Lita debuted the women's division was all about "puppies" and "T & A"....they had to use the short amount of time they got to wrestle to build their character and engage the audience. They were able to do this and they got more and more ring time until eventually they were the main event on RAW. I think that this is exactly what the current divas have to overcome right now. They have to show their character as best as possible in as little time as possible and eventually their air time will be a lot longer. The NXT division has so much potential and I love watching their diva matches. I think that the diva division will eventually get better but we just need to be patient. As for TNA, their knockout division is pretty good. The girls get ring time and storylines which is fantastic. But overall I am itching to see some new female wrestlers on my screen!

4. You've recently spent some time in the UK, how did you find the experience and did it differ from wrestling in the States?

I was in the UK for 35 days and the experience was fantastic!! The main difference I find in the UK compared to North America is that the UK is more wrestling based where North America is more story/entertainment based. Also, in the UK I find it odd that the wrestlers don't go out during intermission (or intervals as they call it) to sell their merchandise...besides that though it is pretty similar.

5. Where can our readers catch you in action next and will you be making your way back across the pond anytime soon?

I will be making my way back to the UK before this year is over hopefully!! Make sure to follow me on Facebook at Leah Von Dutch or on Twitter @LeahVonDutch for all the latest news :)

We'd like to thank Leah Von Dutch for spending the time to answer our questions.

Next week: WWE Hall of Famer J.J. Dillon
Posted by Unknown at 19:30