After last week's interview with Erik Vasquez from The Wrestling Chronicle, we're back in the UK this week as we interview Richard Penaluna from Calling Spots. 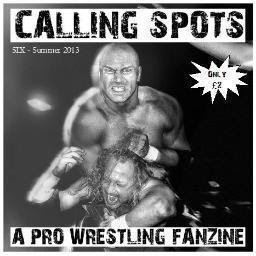 October 5th 1997 and the WWF PPV Badd Blood; In Your House. Specifically Shawn Michaels vs The Undertaker in the 1st ever Hell in a Cell match. I always kind of felt like my first night watching wrestling was so amazing that it would never be matched. That was proven wrong at WrestleMania 25 when the same two men had an equally amazing match. What drew me to it? At the time it seemed 'cool' and within a year everyone my age was watching WWF or WCW. It was 'the thing' to talk about. I just never stopped talking about it some 16 years on.

2. Tell us a little about Calling Spots and how it all came about?

Calling Spots came about after years of writing online for various websites and deciding I wanted to do something different. The great thing about pro wrestling is that everyone has an opinion. It's a shame that most of them are what was bad about this weeks episode of Raw. I decided I wanted to do a project that brings you the same type of wrestling journalism but with an undertone of 'wrestling is fun'. If we criticise something we ensure we offer a solution and explain the evidence that it would work. We also try to provide as much different content as we can, for example my current team includes a comic artist, a graphic artist, a published novelist and a wrestling photographer. We have an ongoing comic strip of the adventures of man who may resemble The World's Strongest Man and the different scenarios in his life which cause him to sweat. We have had the chance to have exclusive interviews with Christopher Daniels about Marvel comic books, Kevin Steen about his favourite zoos and Lance Storm even did a funny little dance while we looked for somewhere to conduct the interview. So yeah, it came about out of love of the FUN side of wrestling.


3. What has been your favourite era for wrestling so far, and why?

My favourite wrestling era was the Bischoff era of WCW. The nWo was the single hottest thing in wrestling, despite what WWE tell you, in my 16 years as a fan. It all went Pete Tong in late 1999 and by 2001 the company was gone, but 1997 and 1998 WCW were the best 2 years in the history of pro wrestling for me personally. The cruiserweights, Goldberg's streak, Jericho's antics, Bobby Heenan on commentary...plus, once you're nWo you're nWo 4 LIFE.

3 - CM Punk/Cena Money in the Bank 2011. The crowd, the build up, the pipe bomb...everything about it just clicked and it was one of those magic moments that are few and far between. Looking back, so many people really believed Punk was leaving with the title. I actually did a "get in" type celebration when he won, something usually reserved to when Newcastle United score a goal....I can't remember EVER doing that for a wrestling match, especially not at the age of 25. The match was VERY worthy of being the first WWE match to get 5 stars in the Wrestling Observer since my number 1 match choice.

2 - Shawn/Taker WM 25 - An absolute master class. If you were going to show someone 1 wrestling match the defined wrestling it would be this one. It was as if both men took everything from two Hall of Fame careers and used every scrap of it in one match.

1 - Shawn/Taker Hell in a Cell 1997 - I often think I must be one of very few people who hold the first main even they ever saw in such high regard. Although not as much of a technical masterclass as their effort at WM 25 the match itself was still amazing. It was ground breaking at the time.


5. Where can our readers find your work and what have you got coming up?

Fans can get in touch with us on Facebook and Twitter @CallingSpots. Our magazine is available for just £2 at CallingSpots.com and our next issue, due in July, features our interviews with Lance Storm, Jerry Lynn and even Mr Belding from Saved by the Bell.
Posted by James at 19:30