Thanks to TNA Impact Wrestling we recently got the chance to chat to British Bootcamp and Insane Fight Club star Grado. This, of course, wasn't the first time we've spoken with the former ICW Tag Team Champion, having previously had him on our (now discontinued) "Five Questions With..." series, as well as chatting to him prior to TNA TV Taping in Glasgow, which can be found on Youtube here.


ATPW - Hey Grado. The first question is quite a generic one, How have you found the British Bootcamp experience?

Grado - It's been amazing because I've got the chance to wrestle in America. I've managed to fulfil a childhood dream that I've always wanted to go and wrestle in front of a live crowd in America. There's nae better feeling in the world. Also because I've had a lot of people telling the Grado character wouldn't work in America, Grado wouldn't go over in America, I went to America and managed to get myself over with some of the crowds. I'm glad, the experience so far has been amazing. Getting to TNA and getting to share the ring with Samoa Joe, Al Snow and Gail Kim, has been a very good experience.

Do you feel the process has helped you develop as a performer? Have you improved as the experience has gone on?

Every day is a learning day in wrestling. Every time you step in the ring, you always come back out with a few learning points for you to work on. So when you're being trained by Al Snow, Gail Kim and Joe, you're obviously going to adapt and learn and find out news ways of performing. 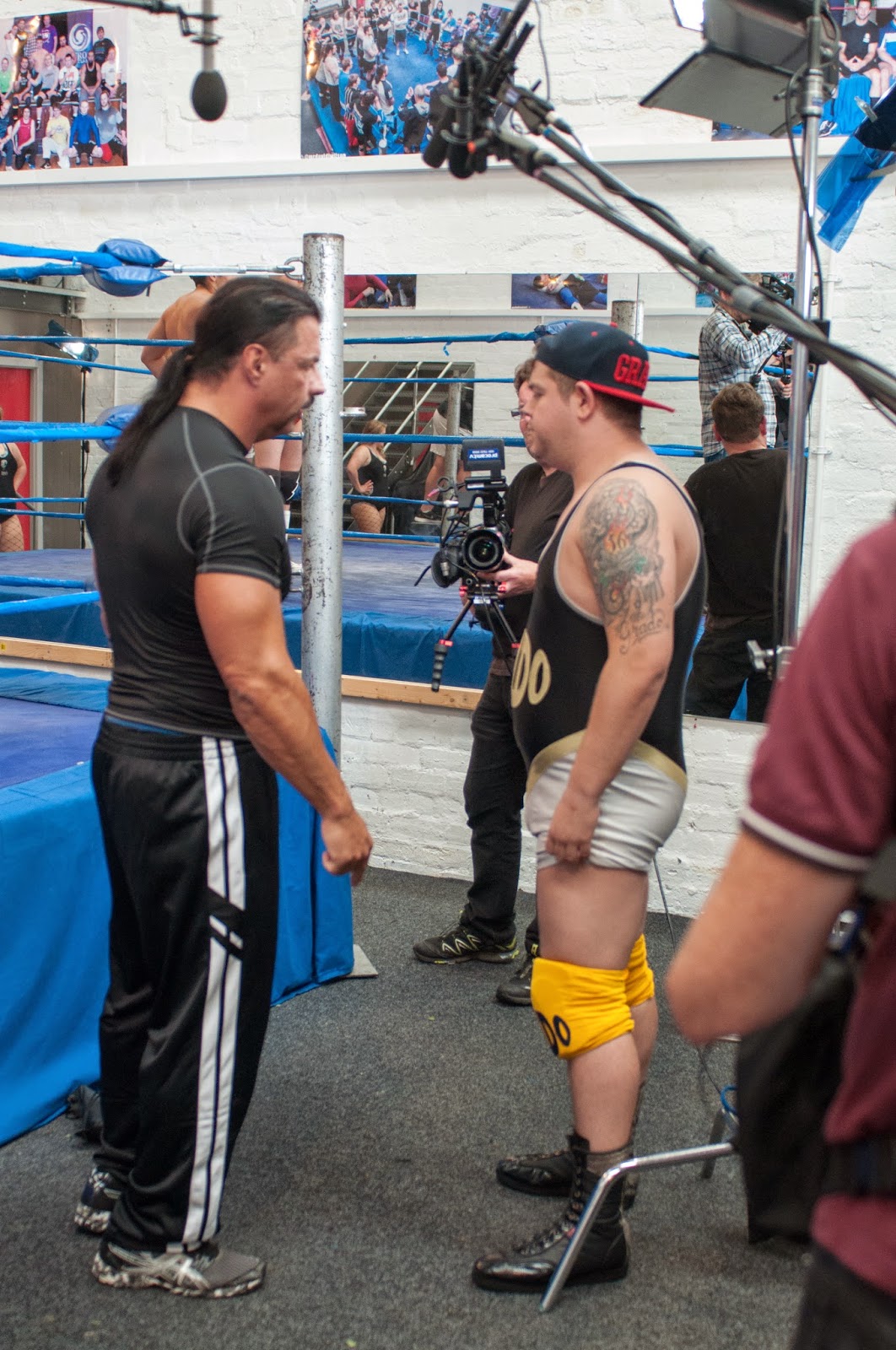 If there were any TNA fans in America or elsewhere, who haven't seen British Bootcamp, what could they expect if you turned up in TNA? Would you perhaps change the character or keep to what us British fans know and love over here?


I don't know. I'd probably keep the same character, go in there and I'm the everyman, that's the term, I'm the guy that probably shouldn't be in the ring, that's the way the other wrestlers could see me, that's the chemistry. I'm the guy whose living the dream here. I'm the guy that isn't six foot four, I don't look like a Greek God, I just go in there and try my hardest every time I wrestle. I hope that people can relate to me, as the guys who's just having a fun time. I'd probably keep the character, as a wrestling fan who's living beyond his means that's what go me to the dance so far, that's the reason I've had the opportunities that I've had.

It's a feel good story as well. I think in the 90's you had the smaller guys, that made a lot of today's wrestlers realise they could become a wrestler and you offer something for the guys out their that aren't six foot four or whatever. Something different.

Exactly! Something different. Wrestling has been boring for too long, same six foot four, big body guys, there's never been chubby wee characters, in a long time. There's never been anything like that. It's time for a change and I think I could be able to flourish in TNA. 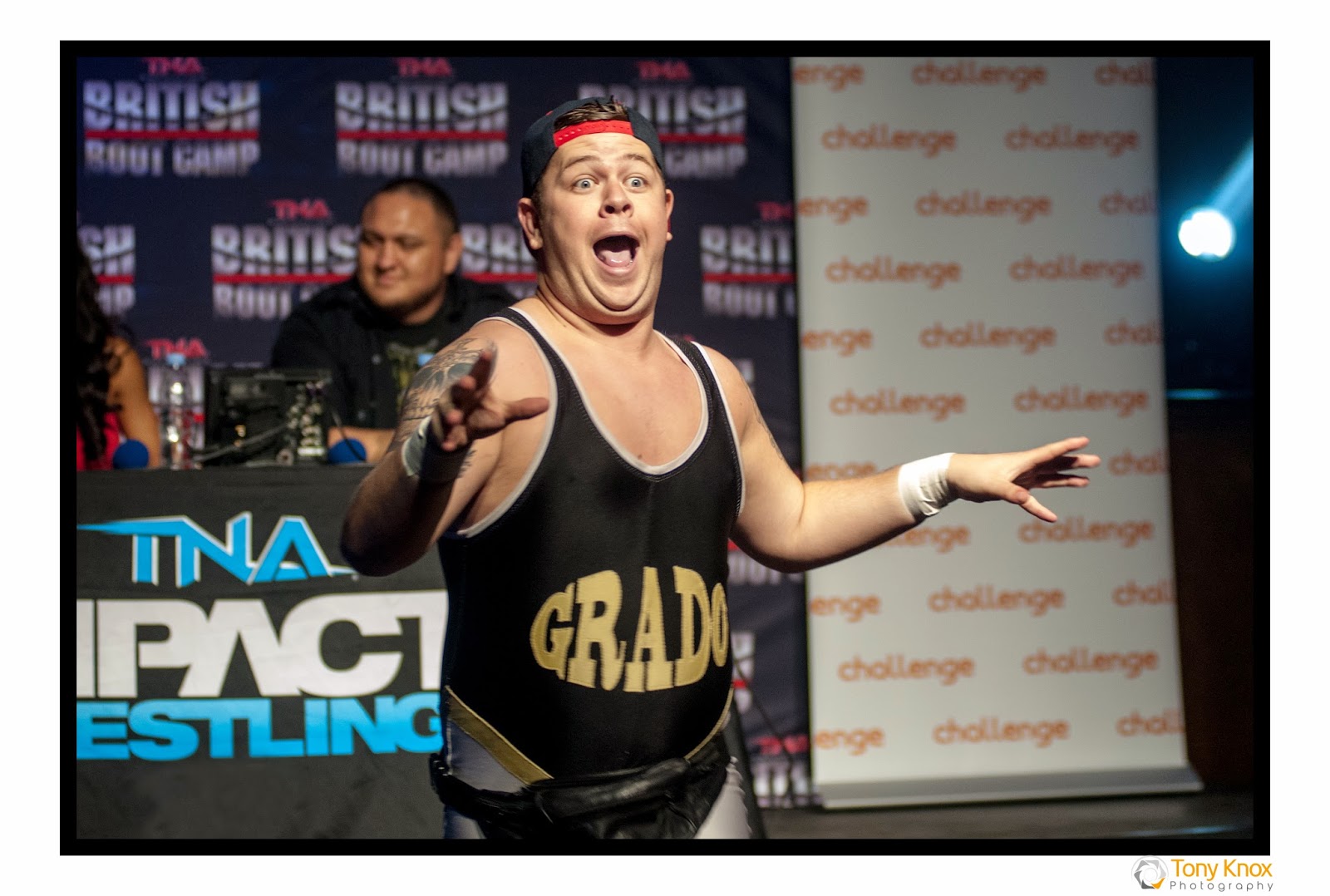 Is there anyone from TNA's current roster that you think you'd work particularly well with in the ring or even in terms of a storyline?

I love the stuff that Rockstar Spud's got going on with EC3, and I'd love to wrestle with Rockstar Spud, as well. Also, I think that me and Zema Ion would have a good X Division style match, I think that me and Rockstar Spud could challenge the Hardy Boyz to the tag titles. And probably big Magnus, he's like a big hard man bully, I'm sure that I could have a cool wee storyline with him. Me vs. Magnus would be brilliant actually, I think that could really work. Then bring in Spud and have a three way, imagine that! Me and Spud vs. Bram and Magnus!


Get it over on the tour! What effect do you think British Bootcamp will have on the British scene as a whole? Do you think we'll see a boost in local crowds?

Definitely. Even since the first British Bootcamp the numbers have been up, because a lot of the general public are unaware that there is this big brilliant British wrestling scene. So again, it's just another series for everyone to see that there is talent here in the UK and hopefully it encourages people to go and out and go their local shows and support the guys who that are trying to make a name for themselves and possibly could be on the next series of British Bootcamp. So aye, I think it's a good thing for British wrestling. 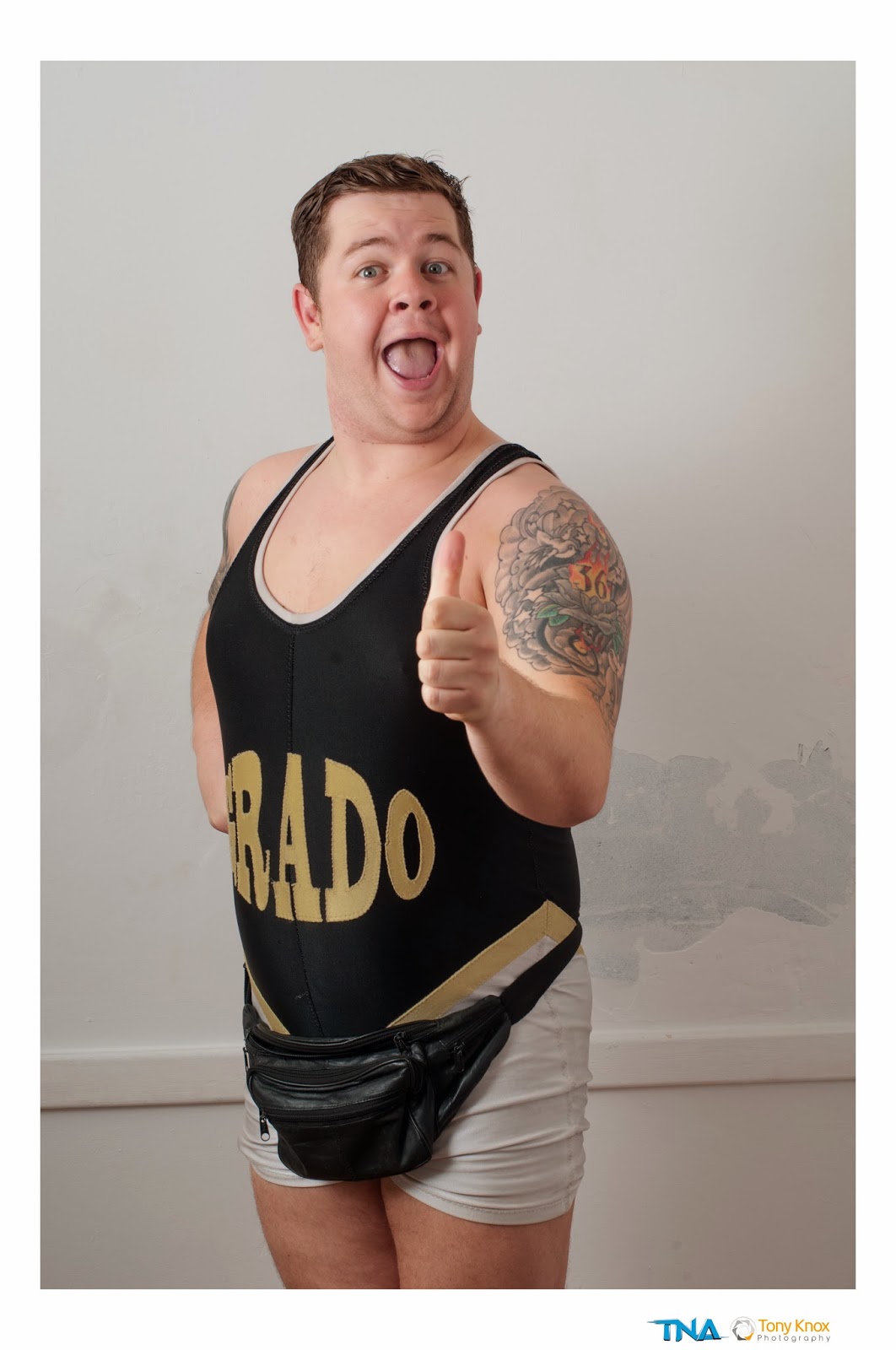 If there was anyone who had watched Bootcamp but perhaps didn't know where to look to find British wrestling, where would you tell them to look?

In Glasgow, there's Insane Championship Wrestling, an Over 18's company. There's loads of family shows that are run by British Championship Wrestling, Premier British Wrestling and then there's Preston City Wrestling, Revolution Pro, there's PROGRESS Wrestling which is a phenomenal outfit , that work outside Islington. I would go to these places, but if you go online and type in British Wrestling, I'm sure you could find links and stuff to local proffesional wrestling. Also www.gradowrestling.co.uk, if you want to come and see me wrestle then all the dates are on there.

You broke into the British Wrestling "mainstream" via a social media, notably the "Get Grado Booked" campaign in ICW. What do you think social media can offer a professional wrestler in 2014?

Well that's the thing, you're Twitter and your Facebook is your gimmick, it's your business. You need to make sure you've got a decent Twitter, you're not tweeting a load of shite, you're tweeting funny stuff or whatever suits your gimmick. So, Dave Mastiff, he is a grumpy bastard online and he is a grumpy bastard in real life. It's just another medium for you to develop your character, so if you want to post promos, pictures, anything. It's really important in 2014, that you're on the job, your on the button with Twitter and Facebook and Vine and FaceParty and things like that. 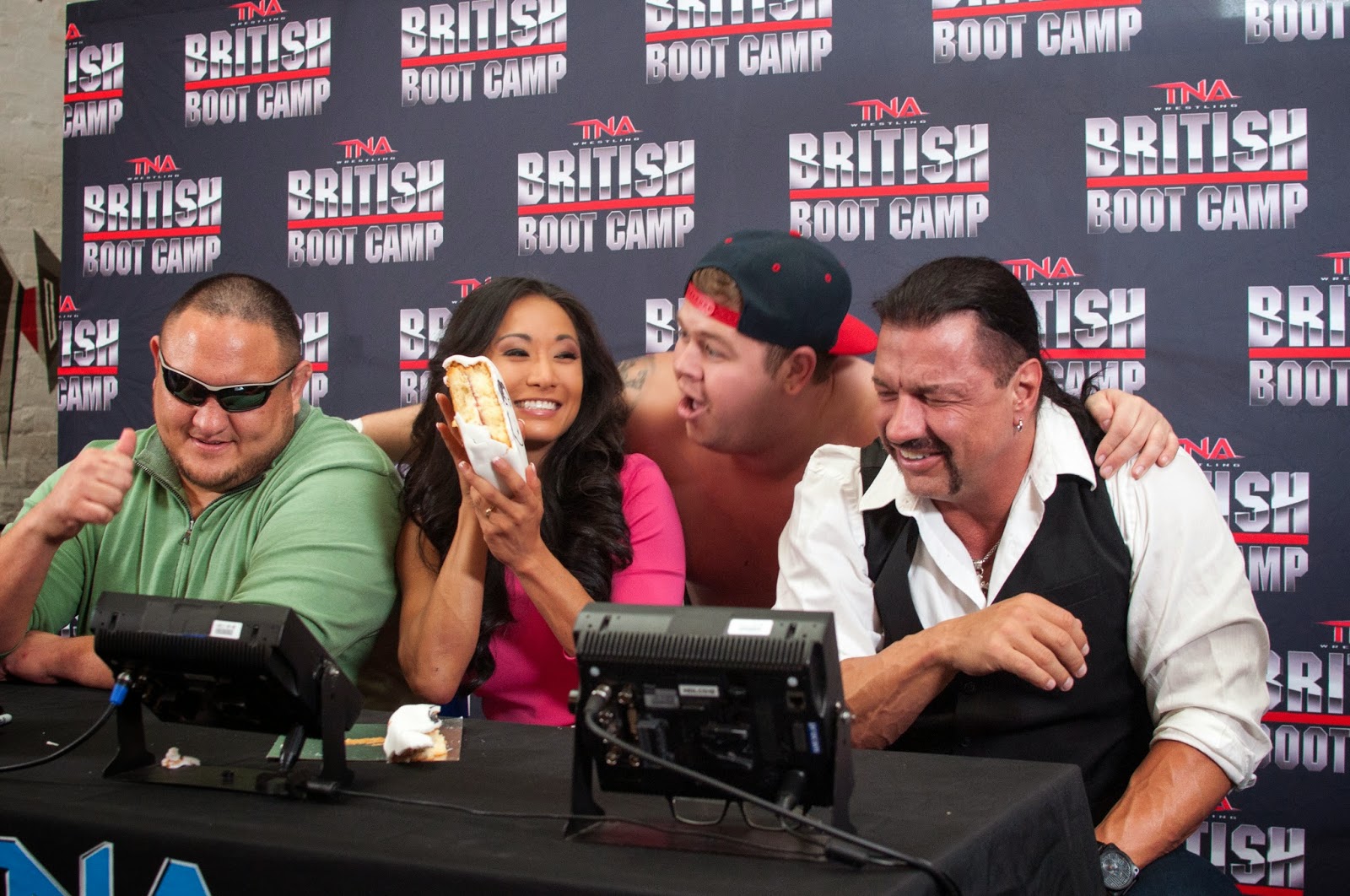 Well I'm going to go on a diet, I'm gonna try and lose a bit of weight. I probably will mix up my gimmick one way or another, I'm not sure what I'm gonna do. Hopefully get the chance to wrestle in America again, keep wrestling in Britain, try and get new bookings in Europe and keep on doing the TV work that I'm doing.

Oh, one last question....When are we going to finally get the big Grado vs. Goldberg match that everyone's waiting to see?

I really hope that Goldberg has seen my GradoBerg entrance! Hopefully next year, Goldberg, if you manage to get to this article, if your listening or reading to this, add me on Twitter, let's follow each other and I'll DM you. Then next year, Grado vs Goldberg at York Hall, we'll sell it out.

Thanks to TNA Impact Wrestling, Grado and Simon Rothstein for putting this interview together. All photo credit goes to Tony Knox. TNA British Bootcamp can be found on Sunday evenings at 9PM on Challenge (Freeview - 46, Freesat - 145, Sky - 145, Virgin Media - 139)
Posted by QTPW at 22:24