Interviews are back on ATPW and Saturday night is their brand new home. We'll be bringing a variety names from both sides of the Atlantic, as we look to bring you the very best content that we can offer. This week's interview is with ICW and wXw regular Big Damo O'Connor, who has become a force to be reckoned with on the European scene as of late, with a string of impressive performances opposite the likes of Chris Renfrew, BT Gunn and Joe Coffey.


This interview was conducted via e-mail between 9th-12th September 2015. 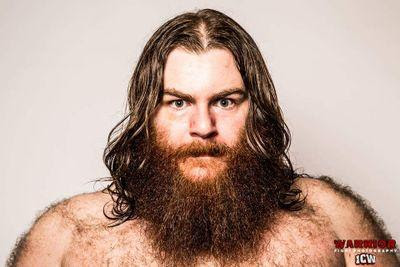 ATPW - What was it that drew you to pro wrestling, both as a fan and then a performer?


Damo O'Connor: As a kid it was the larger than life characters. The colours and the face paint of Sting, Ultimate Warrior, etc but I fell away for a few years because it wasn't accessible on public TV. With the boom of cable television, I got back into it around 1997. They were pushing the boundaries, it was suddenly very cool and edgy, Mike Tyson being there was the icing on the cake as he had just been banned from boxing!  As a 13/14 year old it was right thing at the right time. Finlay was also smashing folk in WCW so it also resonated with me on a personal level to see a successful wrestler on television who grew up only 8 miles away from me.


If there was someone who had never saw you perform, how would you sell yourself to them?

Coming into the business, you were trained by some of the most recognisable names on the UK circuit, what was the most important piece of advice that you were given?


The most important advice probably came from Fergal Devitt. He made me realise I had to take this ten times more seriously. I should train like an athlete and make the fight look like it's real. He opened my eyes.

I also got great advice from Robbie Brookside. He said I have to maintain my Irishness and not try to mimic what we see on television. Keep our colloquialisms and don't start saying things like ass or damn. We don't say that where I'm from so why should I all of a sudden say it in a promo? He gave me a LOT to think about.


As you mentioned, you spent time training with Robbie Brookside, who is currently training the future WWE stars over in NXT, what do you feel Brookside offers to the next generation?


First of all he was a phenomenal wrestler. He was an apprentice to some of the very greats of wrestling and then went on to have a fabulous career. He wrestled all over the world. America, Japan and left a legacy in Germany and Britain. He was a great hybrid of technical and high flying, with charisma to boot.


I don't think there is enough hyperbole to explain how good a coach he is. I spent over 2 weeks training with him every day as well as classes here and there over a 3 year period. I can't think of a better coach I'd met in any sport I played... ever! He managed to have a rapport with every member of the class while still being a firm disciplinarian. I'm gutted he's gone to NXT as he was someone I probably looked up to the most in wrestling. Those students are very lucky!!

As a trainer, how do you approach your classes? Is there a certain focus on a particular style?


I believe in two things. Realism and wrestling. I want all our trainees to be excellent technicians and look like they are killing each other in ring. They can find their own nuances down the line but I want them to have that specific grounding.


How much would it mean to you as a trainer to have someone you trained working for the biggest companies in the world?


Obviously it's our goal. I want our trainees to end up all over the world. I want them to be full time pro's. If someone got signed to the WWE or NJPW I'd be over the moon. It means we were definitely pointing them in the right direction!


You've become a regular for Insane Championship Wrestling over the last two years, as that promotion has grown into one of (if not) the largest in the UK, what do you feel sets it apart from the rest?


The fans. The roster has changed a lot since I started, it's developing into a phenomenal group of lads and ladies. The fan base on the other hand has grown exponentially, but the new fans are of the same ilk. They love being there. They don't just wait for the main event, they go crazy from match 1 and don't stop until they have to leave!


It's not long until ICW hit the road again for their Road to Fear and Loathing Tour, what are those tours like as opposed to the regular shows in Glasgow?


I love the tours. The roster spend a lot of time together and it helps us to bond.

I also enjoy the different cities because we bring in new faces to the roster and the fans are harder to predict. For example I was received as a villain at the start of my match with Dave Mastiff in Birmingham, but by the end they were right behind me. The reaction at the end was unbelievable. I love that about wrestling.

Come to think about it, I've probably had my best ICW matches on tour; Newcastle for example I've had 3 excellent matches. London is the same.

This year we enter new cities and I'm positively raring to go!

As one of the largest wrestlers on the UK circuit, how do feel the role of the big man has changed over recent years? Do you ever feel any pressure to perform in a certain way?


The only pressure I feel is self inflicted. I have specific goals that I want to achieve.


When the average person sees me they  assume I'm a guy built by gorging myself while sitting on a couch. They then can't believe it when I hit a dropkick or come off the top rope. That's only a tiny example of my agility.


The truth is I'm an athlete. I just so happen to be 23 stone. I work out 4 times a week with in ring cardio drills and 4 or 5 times a week lifting weights. I have recently been partaking in German Volume Training and it's really shaken up my workout.


I'm also lucky the likes of Samoa Joe is around, he has absolutely paved the way for Big Men in recent times. Bam Bam Bigelow and Vader came before him. Huge lads who could go that extra gear. I loved it. I want to carry on their example and continue to change people's perceptions of a big man in and outside of wrestling.


Is there any one of the independent circuit (UK, US or elsewhere) at the moment that you've yet to wrestle, but would love to have the opportunity to and why?


I'm sure there are plenty but I really like Timothy Thatcher. He's an excellent wrestler. There's something very believable about his offence. I'd like to take him on.


It would have to be Finlay. I think I'd learn a ridiculous amount from him. He is maybe the most believable wrestler ever. He took it to anyone regardless of size or shape. I love that. Wrestling should be believable. It should suspend everyone's disbelief.


You've seen the popularity of British wrestling explode over your career, what do you feel is the next step in the development of this country's product? Is television the be all and end all in 2016?


Television isn't the be all and end all. It would be nice but the rise of on demand websites and apps has changed the importance of TV even outside of wrestling.

The next step is full time employment by full time touring companies. There are some of us who make their living from wrestling but if I get injured for example I am unable to earn.

Waged income (and all the benefits therein) by companies would help change that.

Do you still watch pro wrestling as a fan? If so, what are you watching at the moment? If not, why?


Of course I do. I'm amazed by wrestlers who say they don't watch wrestling. I want to stay on top of trends and see where my style can fit in anywhere.


I literally just finished watching the G1 Climax the other day . It was the 25th year anniversary for New Japan and it was breathtaking. The final was something special. Tanahashi and Nakamura have such a history and it was brilliant to see the most recent chapter.


I watch as much WWE as I can. Having Sky + and the Network has made it much easier to catch the flagship shows or the specials and NXT shows have been top notch also.

You mentioned the Nakamura and Tanahashi bout from G1, you're lined up to face both men separately for Rev Pro at the start of October, how much are you looking forward to testing yourself against the two?


This is probably the biggest test available to me. It's an unbelievable opportunity and I haven't been taking it lightly.

My goal is to get myself on the same level as these athletes. Fighting them is the first step towards doing that.


Where do you see yourself in the next five years?


My goal is to be the number 1 Heavyweight wrestler in the world. It's a lofty goal, but in five years time I'll be closer to it than I am now.


We'd like to thank Damo for taking the time to give us this interview. You can find out more about Damo on his Facebook and Twitter pages.