After the success of last year's SuperShow of Honor collab between Preston City Wrestling and Ring of Honor, anticipation was high for the second incarnation of the weekend event. Opening on Friday 27th November 2015 at the Evoque Nightclub with Jay Lethal defending the ROH World Championship against Noam Dar in the main event, reDRagon challenging for Team Singles' PCW Tag Team Championship in a Street Fight, Delirious & Dalton Castle facing Joey Hayes and PCW Money in the Bank holder Martin Kirby and five other matches featuring the likes of Doug Williams, Adam Cole, Roderick Strong, Cedric Alexander and Silas Young. But could the 2015 edition open in style? Let's find out. 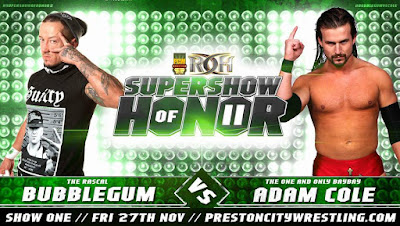 With El Ligero added to the originally advertised Bubblegum vs. Adam Cole bout, and forced to defend his PCW Cruiserweight Championship by General Manager Joanna Rose, the trio combined to produce a pacy opener. Both Bubblegum and Ligero worked some sweet sequences with Cole, whilst the other man was downed on the outside, but we also got some quality moments including all three men including Ligero managing to turn a variant of the Road Warriors' Doomsday Device into a reverse rana on Bubblegum (RIP Bubblegum's fingers). Throw into the mix the narrative elements of Bubblegum's elimination and consequent Pedigree to Ligero, eventually leading to Adam Cole capturing the Cruiserweight title with his vertical suplex lift dropped into a neckbreaker on the knee signature move, and you've got the makings of a pleasing opening bout that set the tone for what was to come. 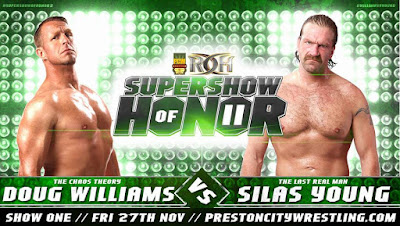 Doug Williams is in incredible shape for 43, pretty sure he's found the fountain of youth knocking around. That's enough fawning over the former ROH Pure Champion for one day, let's get onto the match, as the Anarchist faced ROH's Silas Young, in one of the real sleeper bouts of the weekend for me. The two men seemed to connect quickly inside the ring and whilst the crowd was a little slow to buy into it, as the two men progressed with a series of technical reversals and near falls, Evoque was very much hooked by both Williams and Young's work by the end of the contest. Despite the quality of the action, I felt this bout could have lost three or four minutes and still been just as good, if not better for doing so. The finish, however was a fitting close to the match, with The Anarchist escaping Young's Misery manoeuvre, before hitting Chaos Theory for the victory.

Perhaps not the prettiest of matches across the weekend, but Sha Samuels vs. Kenny King was effective in it's execution, had a lively crowd. The bout unfolded nicely with King attempting to evade Samuels, and especially the East End Butcher's sleeper hold, using his quickness and athleticism. There were a few moments that weren't as strong as they could have been, like a dodgy looking clothesline, but for the most part the wrestling was fine and slotted into the tale well. The short encounter suited the two men's styles and made perfect sense, even if the finish, with The Pretty Boy Pitbull having both arms raised and dropped three times whilst in the sleeper, was a bit of a strange one.

Fuck me, this next match was entertaining. Joey Hayes and Martin Kirby would really come of age as an act over the weekend for me, and this was the start of that. Dalton Castle quickly got over on his PCW début and alongside partner Delirious provided a great mixture of comedy and quality wrestling, that worked well with the style of the PCW regulars. A spot where Kirby had a Camel Clutch locked onto Delirious and Hayes just kept running the ropes (instead of, for example, hitting a low drop kick) with the PCW Money in the Bank holder screaming at his partner, was absurdly funny and sums up the relationship between the two characters well. An action section between Kirby and Castle stands out as the strongest wrestling of the contest, with the pair flowing through a series of counters with ease. It was a surprise to see the PCW pair work together to get the victory, hitting an elevated DDT onto Delirious, but worked well to advance their storyline heading into the three other shows across the weekend. It wouldn't be the last we'd see of Hayes and Kirby on Show 1 either...


Following a quick interval it was back into the action 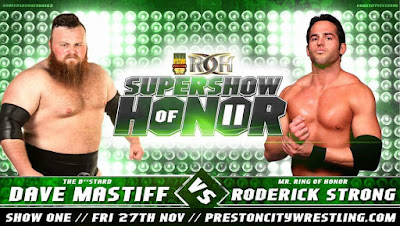 A surprising choice to open the second half was Dave Mastiff defending the PCW Heavyweight Championship against current ROH World Television Champion Roderick Strong, but the bout still managed to deliver. The action took a while to find a groove, but with the crowd more than content to rip on Strong for his boots, which possess the unique qualities of being both little and shitty, things remained entertaining. When the action did get going however, it was very physical in it's execution and easy to watch. Strong hitting a superplex on the Bastard was a spectacular sight, especially with Evoque's low ceiling. Mastiff continued to be presented as a strong champion, getting the clean victory over Strong, with a wonderful reversal of Mr. ROH's sick kick, sending his challenger into the turnbuckle and picking up the victory with a Cannonball. I'd have loved to have seen what these two could have done with another five or ten minutes and a main event slot. 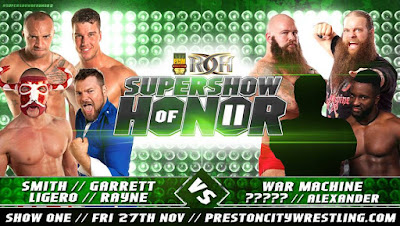 With F.W.B. member Iestyn Rees (replacing El Ligero) on Team PCW (alongside Dave Rayne and Interracial Love duo Ashton Smith & Charlie Garrett) and the newly heel Lionheart being a surprise addition to Team ROH (alongside War Machine's Raymond Rowe & Hanson and Cedric Alexander (who despite usually working as a villain for ROH, used a much more fan-friendly character most of the weekend), this match had a rather unique dynamic, that took a while to bear fruit and get the crowd truly involved in the action. Once that narrative thread of Rees and Lionheart's respective affiliations and issues with their own partners did kick in, things became much more entertaining and the crowd was quick to pick their sides. With Dave Rayne getting destroyed by the opposing team as the finish, this bout certainly gave the fans something different, with the unique dynamic just about paying off. 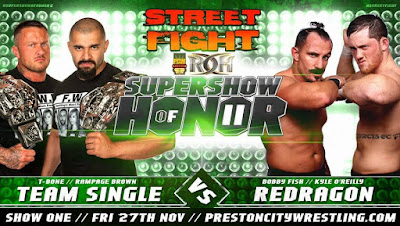 A Little Backgrond - PCW Tag Team Champions Team Single (T-Bone and Rampage Brown) and IWGP Junior Heavyweight Tag Team Champions reDRagon (Bobby Fish & Kyle O'Reilly) have been going at it since May 2014, with the two teams trading victories a number of times. Team Single won the initial bout (Supershow 4 - Show 1, 30th May 2014), before reDRagon picked up the victory in a Four-Way that also included The Briscoes and The Decade (Supershow of Honor - Show 1, 28th November 2014) and then won a No Disqualification contest (SuperShow of Honor - Show 4, 30th November 2014). It was time for one more match between the two, this time under Street Fight rules, with the PCW Tag Team Championship once again on the line.


Was this ever going to be anything other than brutal and shit load of fun? No, no it wasn't. Whilst the silly weapons (rubber animals and wrapping paper) were questionable, there was enough physicality that it honestly didn't matter that much. The steel chair battle was a great moment, with the pay-off of Brown hitting O'Reilly in the stomach making a lot of sense for the character and getting a great reaction from the PCW faithful. Even the Christmas paper got a good spot, with O'Reilly wrapping T-Bone up on a steel chair at ringside to deliver a running kick, even if Evoque didn't jump on the obvious "Wrap him up, Kyle, wrap him" chant. Both teams got some ridiculous near falls, with reDRagon being denied after hitting Chasing the Dragon onto a chair and Brown coming close with a piledriver, with the crowd getting hotter as things went on. F.W.B. members, Team Single were able to pick out the victory in the end with T-Bone claiming the bragging rights with a silly vertical suplex dropped into a Tombstone Piledriver, to continue their 909 day reign a top the tag division and close one of the strongest contest of the evening.


But it all seemed to be over, with Joey Hayes attempting to cash in Martin Kirby's Money in the Bank briefcase for the titles (with a little help from reDRagon's post match title shots to the head). The reaction for this was HUGE, and the duo getting the pinfall with their elevated DDT combo, got one of the biggest pops across the weekend...it was however not to be, as Joanna Rose reversed the decision, because it was Hayes who cashed in the briefcase and not Kirby. Joanna got some nice heat for her involvement with the crowd now clamouring for someone to take the belts of off T-Bone and Brown. An interesting piece of booking, here's hoping that this get's a pay off down the line. 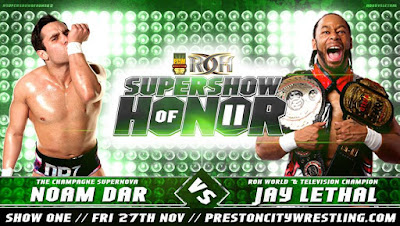 After a stellar undercard, the main event was going to have be something special to provide a satisfying conclusion to the first evening. Luckily we had ROH World Champion, Jay Lethal defend his championship against Noam Dar in a world-class encounter. With Preston backing their regular and former Cruiserweight Champion against the débuting Lethal, the two had a fantastic soundscape to work with and completely ran with it throughout. The early portion of the bout featured some smashing technical wrestling, with the two trading holds and 22 year old, Dar more than holding his own with the more-experienced World Champion.


Where the match really excelled was it's storytelling, with the contest kicking into the next gear as soon as Dar hit a dropkick to Lethal's knee with the "Greatest First Generation Wrestler"'s leg held in a figure four around the ringpost by SOME GUY from the front row. Lethal's selling was spot on, and showed off especially during a sequence of Superkicks where Lethal would grab hold of his knee after each kick, and meant that everytime Dar managed to lock in his Champagne Super Knee Bar submission, that crowd erupted and willed the former Black Machismo to tap out. With the bout rising to a dramatic climax, it was however Lethal who came away with the title, following his second Lethal Injection attempt being successful. Whilst all logical signs pointed to Lethal retaining, it's a credit to both men that the near falls and submissions were so well received. An excellent way to close the first night of action.


The highest rating I've given a PCW show since I began using the ATPW Scale back in July, this was entertaining event, pretty much from top to the bottom. Not a bad match on the card, with an excitable and involved crowd who were both appreciative of the action and full of creativity when it came to chanting. The main event stands out as the strongest contest of the evening, with Jay Lethal and Noam Dar capping off the evening well and the Tag Team Championship Street Fight also standing out from the pack, whilst also being completely different from the bout it preceded.


Would PCW and ROH be able to keep up the quality heading into Show 2, with Lethal once again main eventing, this time defending his title against Doug Williams, as well as Noam Dar facing Cedric Alexander, Dave Mastiff defending the PCW Heavyweight Championship against Silas Young and five more matches involving the likes of reDRagon, Adam Cole, Dalton Castle, Martin Kirby, Roderick Strong all in action. Full review of Show 2 (as well as the rest of the weekend coming soon)
Posted by QTPW at 23:11