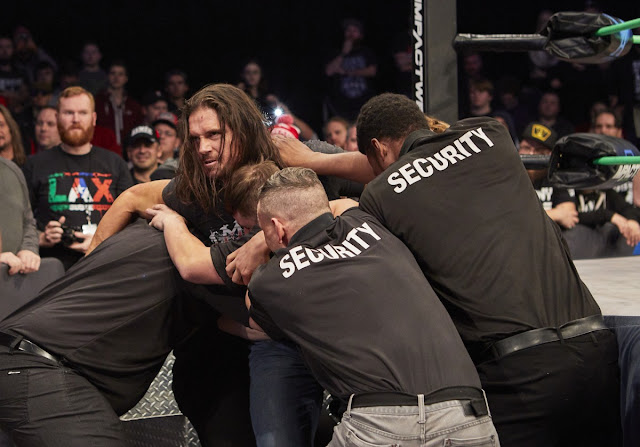 
Jimmy Jacobs turned up again, took a selfie with Josh Mathews and joined the commentary booth for Sonjay Dutt vs. Matt Sydal. 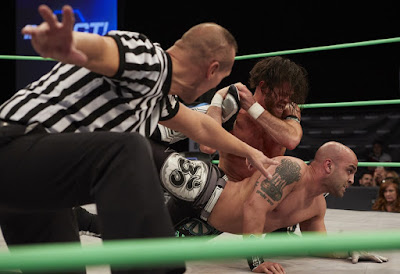 An interestingly paced match here, with Matt Sydal and Sonjay Dutt pushing more into the technical category than the high-flying style that they're better known for. There was still a good deal of flippy shit, including a standing moonsault from Sydal, but the majority of the match however saw Sydal target Dutt's leg, following a dragon screw leg whip. This produced a couple of lovely moments, like Sydal cutting off a sunset flip attempt by going after Dutt's leg before locking in a single leg Boston crab, with the Original Playa for the Himalayas selling the body part well. Considering both were babyfaces heading in, I'm not convinced this was the right direction to take the bout, with the crowd not really getting into it and with the action often feeling a little bloated in the middle. After a Bound for Glory marred by poor booking decision, it was just nice to start the show with a clean victory, as Sydal put Dutt away with a Shooting Sydal Press. Jimmy Jacobs on commentary was a thing, with the Zombie Princess only staying around for a few minutes before leaving because he wasn't getting enough attention, despite the screen having featured him more than the action in the ring.

After the match, Ethan Carter III came out to say that Sydal was a choke artist, apparently turning back heel, days after he turned babyface at Bound for Glory. We closed without any real confrontation with EC3 saying "Maybe in another life...you could've been reborn a winner" 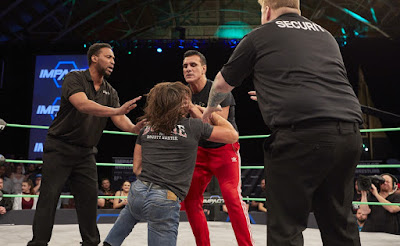 Parts of this brawl worked really well, parts of the brawl was just two lads rolling around backstage. Honestly, there were portions that felt like I was watching two teenage brothers have a scuffle and the action backstage went on for at least five minutes too long with the unnessarry inclusion of Braxton Sutter and Caleb Konley. The things that did work were Impact flying through the screen as Mckenzie Mitchell attempted to interview AEP, Impact's dive off a toilet building thing and the portion that went out into the arena. The two getting on the mic, with Impact having to goad AEP to get in the ring by telling him he wasn't the pride of his own father, let alone the Pride of Mexico was nicely done and played well by both men. The finish with the 2 time WWE Champion hitting a DDT on Impact, taking out security and locking on an armbreaker in the ropes had some punch, furthered the issue between the pair and made AEP look like trash. Also big shoutout to AEP wearing a full red Adidas tracksuit, whether it was conscious decision or just how he dresses, it added to his trashy image. 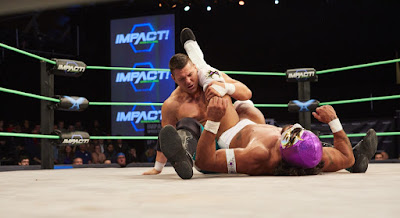 The match of the night came in this clash, as Eddie Edwards and El Hijo del Fantasma put on a pacy, back and forth match. The two packed their ten minutes full of action from the very beginning, with the former Gift of the Gods champion pulling out some lovely looking offence when controlling the first third, including a tilt-a-whirl backbreaker and a frankensteiner. Edwards has always been compelling when fighting from underneath here, with a likeable persona and that shone through here as he scrapped for everything he got, pulling out a nice near fall off a Blue Thunder Bomb hopespot, before making the Tiger Driver his focus, attempting to hit the move multiple times. This resulted in a strong near fall when Edwards managed to hit the move, after removing his elbow pad to hit a lariat, only for EHDF to get a shoulder up before two. The final stretch lifted the quality, even if EHDF blocking a Boston Knee Party was poorly shot and/or edited together. Edwards would eventually hit the Boston Knee party and Diehard Flowsion to cap off a convincing victory, that raises his stock within both Impact Wrestling and Pro Wrestling NOAH. The only nit-pick I have here is that the two trolled repeating a spot on the apron that was arguably the best moment of Bound for Glory, only for it not to happen, which seemed a little unnecessary. It did result into two gorgeous suicide dives though, so not all was lost. 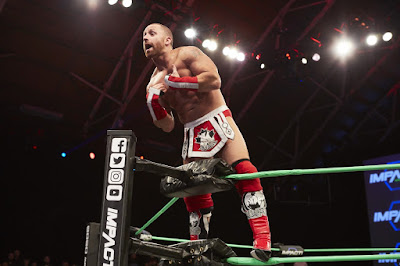 Until Petey Williams made his entrance, I was losing patience with this lengthy opening duo-loge from Global Champion Eli Drake and his pal Chris Adonis. I usually like Drake on the mic, but there was very little going on here and a lot of time for that little to go on in. Adonis told the crowd to sit down, Drake said somethings, put over beating Johnny Impact at Bound for Glory, Drake fiddled with his title belt quite a lot, said something about Alberto El Patron and then said he'd been given the night off because "there's no one left to challenge for this title". It just went on and on and nothing happened, we got no new information and Drake seemed to be lacking in some of his usual energy and charisma. Luckily, once Williams entered, Drake seemed to wake up, seemingly because his best work comes when he has some one to bounce off of. It all ended up with Adonis saving Drake from taking a Canadian Destroyer and we'd find out later that this had somehow earned Williams a title shot. The crowd loved Williams though, because he's Canadian and if there's one thing we know about Canadians it's that they love Canadians. Canada.


The company has literally just held TV tapings, but they're airing footage from a BCW show from October? Go figure. In all honestly, the BCW footage actually looked better than footage from Impact itself, with a better looking crowd who seemed to be more into the action. The match itself took a while to get going, consisting mostly of strikes from Spinelli and Allie running out of the way of corner attacks. The last few minutes saw the action improve with a couple of nice near falls for both, including a Fisherman's suplex from Spinelli. Unlike most of the Impact footage, the finish featured some brilliant camera work, as Spinelli went for a moonsault, only for their to be no water in the pool, before an Allie Valley Driver put the SHIMMER performer away.

Allie was interviewed, speaking about being in the ring with Gail Kim at Bound for Glory and what Kim's announcement next week could be.

The GWN flashback moment of the week, saw Team International (Sonjay Dutt, Amazing Red & Hector Garza) go over Team Canada (Bobby Roode, Eric Young & Petey Williams) from the original episode of iMPACT from June 2004. The finish included some of the most exciting wrestling showcased on the entire show with a Code Red, Canadian Destroyer and Tornillo all being pulled out. (3:35) 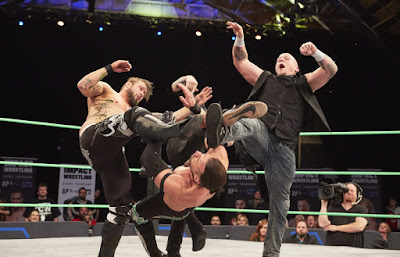 Sami Callihan got a much better introduction here as oVe picked up a dominant victory with their wacky All Seeing Eye triple-team move.

A smiley Jeremy Borash and Josh Mathews opened the show in the ring, running down the card for the show before throwing to a Bound for Glory highlight package.

The Pluto TV rewind of the week featured Roddy Piper blasting Chris Rose with a fire extinguisher after Rose proclaimed "Wrestling is Fake" from The Best Damn Wrestling Event Period in October 2004. 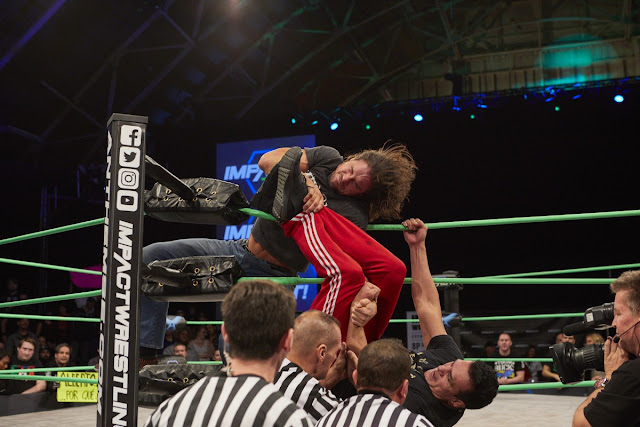 After a Bound for Glory that featured some good wrestling, but terrible booking, this episode of Impact was a set in the right direction. Eddie Edwards victory over El Hijo del Fantasma was a high-quality contest for television, whilst Sonjay Dutt vs. Matt Sydal was also a decent watch and seeing Sami Callihan and the Crist Brother beat the shit into people is always fun. The non-wrestling segments were a little pacier, with a weak performance from Eli Drake standing out as particularly disappointing.