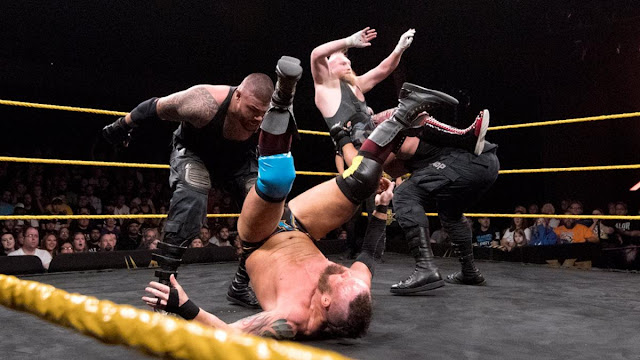 On 2nd November 2017, WWE aired its 272nd episode of NXT, taped at Full Sail University in Winter Park, Florida on 4th October. Our Main event was once again, a big TakeOver rematch as the big lads from SaNItY defended their titles against the probably bigger Authors of Pain. The show also saw action from Johnny Gargano against Fabian Aichner and Nikki Cross getting a one-on-one chance at revenge against Taynara Conti. But was it any good? 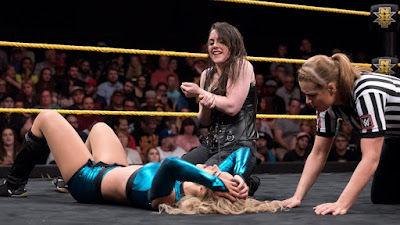 Off the bell, Cross is straight in with a running crossbody and grounded strikes, Conti tries to bail but Cross follows, trapping Conti in the apron banner before more strikes, Cross rolls Conti back in who catches the wild Scot with a kick and a mat slam before stomping her out, Cross finds it funny that Conti thinks kicks can stop her and powers back with a clothesline, slam to the turnbuckles, tree of woe stomps to the head, a reverse DDT and the Fisherman's Neckbreaker for the pin. A quick match that did its job giving Cross an undeniable win over the woman that nearly cost her a title shot. Conti is still new but seems to be developing quickly.

We get a recap of Mercedes Martinez's promo from last week, it's not just on the YouTubes now, lads. 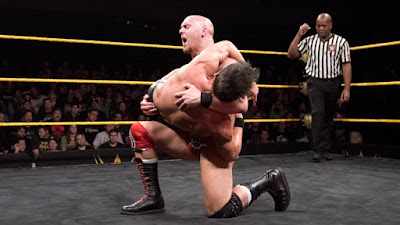 Lock-up to start as the man whose nickname is 'wrestling' gets the best of the encounter, floating over into a drop-toe hold and keep the larger Aichner grounded, Aichner gets Gargano up and throws him to the ropes but Gargano rebounds with a sunset flip for a 2, hitting an on-the-button dropkick before running into a powerslam, Gargano immediately responds with slaps, sending Aichner out of the ring, Gargano goes for a plancha but Aichner catches him slams with shoulder first off the crowd barricade and into the ad-break, back from the break and Aichner has a big Italian bear hug on Gargano, how is that different from a normal bearhug? I don't know but the announcers keep reminding us that Aichner's Italian and so was Bruno Sammartino, knees to the face and Aichner goes for a running strike but misses giving Gargano an opening to hit the rolling floor kick, some neat clotheslines, Aichner tries to respond but goes straight into a beautiful slingshot spear for a 2, some tussling on the apron as the two men try to suplex each other but Aichner settles for a face-first slam on Gargano back into the ring, up top and Aichner goes for a springboard triangle moonsault but Gargano rolls to the apron and hits beautiful slingshot DDT for a very close 2, Gargano slaps Aichner into the corner and goes for a lawn dart but Aichner escapes, Gargano once again with the high-risk manoeuvres gets caught by Aichner into a backbreaker and a powerbomb for another close 2,  Aichner wears down Gargano with Italian uppercuts because as I noted earlier, he's not German, a pop-up backbreaker takes down Gargano and Aichner is up top again, another moonsault this time to the knees, Gargano hits a running kick and goes for the GargaNo Escape but Aichner leverages into a Full Nelson Pin for his first win on NXT. Really strong work for a no-feud, midcard NXT TV match with both men working clean, quick and precise. Johnny is the kind of talent who even though you root for him, he doesn't always need the win and he made Aichner look like a top-tier talent here, which he is. My one worry going forward is the parallels between how the commentary team talked about Apollo Crews & Fabian Aichner, unless it turns out he's an incredible talker, I hope he finds his Titus O'Neill to help him develop character sooner rather than later.

Drew McIntyre is in William Regal's office, he's signing the contract for the NXT Title match, later tonight, they'll have a contract signing. But he just signed it. I know it's confusing but you know how Drew likes men to look him in the eyes.

We get an Aleister Black-Velveteen Dream video package. Black talks about how Dream has been vying for his attention and now he has it, he's going to regret having it. I guess their TakeOver match is official now. RIP Velveteen Dream's head.

The Street Profits are standing around a Maserati talking about how hard work gets you nice cars when up turn Riddick Moss and Tino Sabbatelli to tell them that this is their car and to leave it alone. I know this is meant to be the spark of a feud between these two but I just want to know more about joint car ownership. 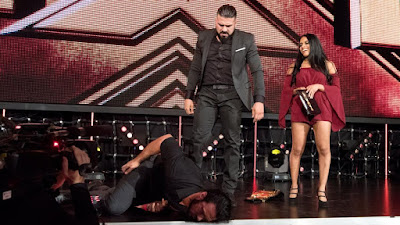 Drew McIntyre is heading to the ring when Andrade Almas jumps him on the ramp and gives him one of the stiffest looking beat-downs on NXT TV. leaving him in a pile of 'ow', Andrade would sign the contract before taking some gum from Zelina Vega to use to stick it to McIntyre's shirt. Lad.

The Iconic Duo are backstage complaining about how 'crazy Nikki' took Billie Kay's spot in the Fatal Four-Way, they mock Kairi Sane for being a pirate when 'Halloween was yesterday'. Kairi comes past and threatens the Duo with her elbow. Next week - Kairi Sane vs Billie Kay. 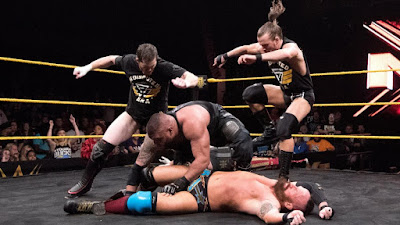 Young and Rezar to start, Young is quickly overpowered and pushed to the Author's corner, tag to Akam, Akam begins working over Young but Young pushes Akam to his corner and tags in Wolfe as they work over the young author with double teams till Akam manages to hit a death valley driver to the top left corner on Wolfe, Authors of Pain utilise a similar game plan going for quick strikes and quick tags, keeping Wolfe down into the ad-break, back from the break and Rezar is now tagged in, maintaining a guillotine choke on Wolfe, tag to Akam and a double slam gets them a solid 2, Wolfe plays a good axeman-in-peril, powering his way to his corner but continually being cut off until a double big boot gives him the opening he needs to get that tag and apply heat to it, hitting big open forearms on both authors and a lovely leaping neakbreaker on Akam, Young goes up top, Rezar tries to intervene but takes a mighty German from the German allowing Young to hit the elbow drop for a 2, tag to Wolfe for a diving clothesline, tag back to Young and a Double Neckbreaker for the pin but Rezar breaks up the pin, Rezar hits a lariat on Wolfe, Young with forearms to Rezar, Akam takes out Young and they pick up both members of SaNItY for a Super Collider before hitting the Last Chapter on Young, before they can get the pin, in come The Undisputed Era and with a DQ finish, things go to shit. This was a distinctly average match for the most part, it had some exciting stretches but it did feel like with the angle being played to lead into what would happen after the match, the three teams have been saving their best stuff for WarGames. Hopefully that's true as the only really combustible element in this feud so far has been Roderick Strong. Let's hope they pull it out of the bag.

The Undisputed Era beat down everyone and everything till Killian Dain hits the ring and temporarily takes out the Era but they respond and beat down the Belfast beast, Roderick Strong hits the ring, putting on the Undisputed armband he was given last week. They hold up one of the Authors telling him to kick him or something but instead Roddy uses the opportunity to elbow Adam Cole in the face and then tries to fight off Fish and O'Reilly, the Authors, now back on their feet, even the odds, as all hell is breaking loose, Regal tell them that this has gone insane and that it needs to stop. There's going to be a match between SaNItY, The Undisputed Era & Authors of Pain and Roderick Strong but only one match can hold them, a match that hasn't been seen for nearly twenty years, the match will be, in WAR GAMES! The crowd goes wild, everyone at home got this spoilt for them about a month ago.
Thanks, Triple H.

Johnny Gargano asks himself if he still belongs in NXT after another loss, he knows the people still believe in him but he doesn't know what to do. Guess you just have to do the obvious thing, have an ab-off with Shawn Michaels.

This was a perfectly good hour of television, well-paced with a good amount of in-ring action and around the ring storytelling. Gargano and Aichner effortlessly stole the show but the rest of it was still fine. Although, with two more episodes till WarGames, just fine won't quite cut it.