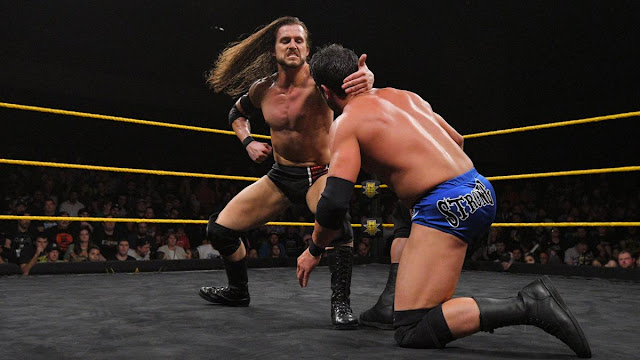 On 9th November 2017, WWE aired its 273rd episode of NXT, taped at Full Sail University in Winter Park, Florida on 4th October. Our Main event was an NXT TV first-time meeting of Adam Cole and Roderick Strong, though far from the first time these two have faced each other with matches in Ring of Honor & Pro Wrestling Guerilla under their belt. The show also features The Velveteen Dream against Cesar Bononi, Mae Young Classic winner Kairi Sane taking on the half of the Iconic Duo who doesn't have a title shot, Billie Kay and Heavy Machinery taking on Sean Maluta and Chris Payne. But was it any good? 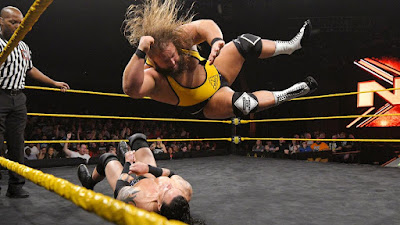 Quick squash m8. Otis and Payne to start, Payne ducks under Dosevic and slaps him on the back which just makes the big meaty man angry, he knocks over Payne, picks him back up, slaps him on the bum, hits a shoulder barge, a delayed body slam, starts hype-slapping himself and then hits THE WORM into a big elbow drop, tag to Knight and they pick up Maluta who sillily got involved for a double shoulder barge, a double splash in the centre of the ring on Payne, one bottom-rope springboard elbow drop, a tag to Dosevic and a Trash Compactor slam-bulldog combo later and it's a pinfall for the big boys. Otis Dosevic hit the worm 11/10.

Christie St. Clair or any one of the number of nondescript backstage interviewers is backstage with Ember Moon, in response to Mercedes Martinez saying that she can't win when it matters, if that's the way she feels, she wants Martinez to meet her in the ring next week and she'll show her how much of a threat she is. Them's fightin' words. 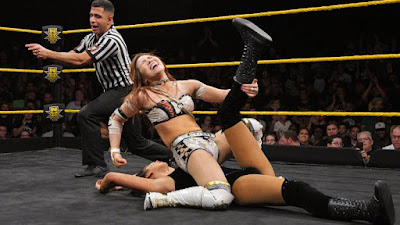 Quick, slightly-less squash m8. Kay and Sane lock-up to start, trading holds and running the ropes till Kay hits a shoulder block, back on their feet and Sane hits a tilt-a-whirl rana and a dropkick for a 2, Royce is up on the apron and Sane punches her off opening up for Kay to forearm her down for a 2, grounded strikes from Kay transition into an Argentine torture rack, dropped to the corner and rolled up for a 2, Sane retaliates with chops pushing Kay to the corner and hitting a sliding knee strike for a 2, Royce is back on the apron and kicked off, a back fist knocks down Kay setting up for the Insane Elbow for the pin. X marks the Spot, shouts Mauro Ranallo presenting us with another better name for the Insane Elbow. This was meant to be another solid win for Sane to remind us of how much of a threat she is going into TakeOver: WarGames but it didn't really work with it relying too much on heel domination over the short time and also reminding us that as much fun as Kay is as Royce's manager/tag partner, she's a far less compelling in-ring presence.  Not great, Bob.

Regal's on the phone, chatting to Robbie Brookside about World of Sport or something when Kassius Ohno comes in dressed in a Cesaro T-Shirt like a right King of Wrestling, talking about how his return to NXT has had ups and downs but recently, it's been on the up and he'd like to get back into title contention by taking on Lars Sullivan at TakeOver: WarGames. Regal says OK but looks like Ohno's an idiot. Big Boots and Elbows, probably.

There's a package for the WarGames match with talking heads from Dustin Rhodes, Arn Anderson & Booker T. Beyond the affectionate tributes to Dusty Rhodes, you could probably re-edit this to be any number of Hell in a Cell packages, playing up 'demonic structures' and the like, and it would still make sense.

Andrade Almas & Zelina Vega are being interviewed backstage, they ask about the strategy going into TakeOver, Vega says that she wouldn't be as 'successful' as she is if she gave away her secrets but suffice to say that they have given Drew what he wants by coming up to him and looking him in the eye but he clearly wasn't ready for Almas, who does he think he is? Asuka? When asked about what the relationship is between Vega and Almas (which is clearly Client and Manager, would you ask the same of Lesnar and Heyman?) She instead diverts to talking about how she's known Almas for 7 years and knows what he's capable of when he keeps his eye on the ball, she says that people may have wins over the old Almas but no one can take down the new Almas, Almas says some bits and pieces tl;dr he says he's going to the next NXT champion. 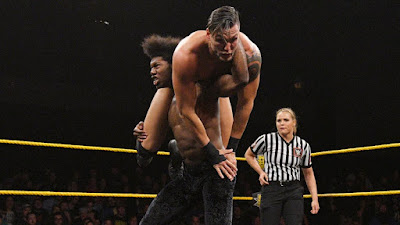 Quickest squashiest m8. Dream and Bononi lock-up, Dream takes control with a rear-waist takedown, uppercuts in the corner are interrupted by a back elbow from Bononi, he hits strikes and picks up Dream for a big slam who slides out, hits a kick and a clothesline to take down Bononi hitting ground strikes, in the corner Dream stomps out Bononi till nearly five so ref Jessica Carr separates the two of them and Dream screams at her not to touch him, big spinebuster and the rolling Death Valley Driver and Dream has the pin. Dream is so much fun to watch, even though this was just another short burst, here's hoping he can deliver in a PPV-length match setting.

Post-match, Velveteen Dream tells Aliester Black he's given him what he wanted and now he's on his mind, at TakeOver, everything that is in the dark will come to light and Black will say his name. Don't worry, I'll do the Destiny's Child jokes eventually.


Ruby Riot is backstage getting an update on the injury sustained during her triple threat match back at NXT #269, the doctor tells her she'll be out for another two weeks, Sonya Deville turns up and tells her that she should have just tapped instead of taking the cowards way out and trying to crawl to the ropes, especially as it caused Deville to lose her shot at the title, Riot responds saying she shouldn't have stopped and should have just broke the arm and that she's tired of Deville making excuses, challenging her to a match in a few weeks when Riot is healthy, Deville accepts and tells her to heal up her arm, so she can break it.

Street Profits (Angelo Dawkins & Montez Ford) are backstage handing out solo cups to children in business attire when in comes a delivery man from a dry cleaners with a suit for Tino Sabbatelli, who Ford pretends to be, up come Sabbatelli and Riddick Moss and all of them exchange promo in their signature promo style, namely talking all over each other. Constantly. Somewhere amongst this, a match challenge is made for next week. 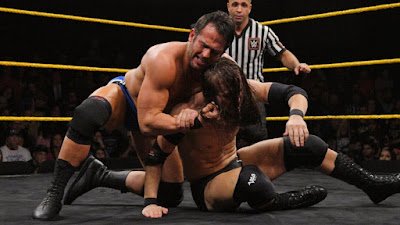 Cole is out on his own so Kyle O'Reilly and Bobby Fish are definitely going to get involved and fuck up the match later, collar and elbow tie-up to start as Strong goes for a double leg takedown transitioning to a rear arm bar into a headlock, a reversal by Cole into a hammerlock is returned to a headlock by Strong into headscissors from Cole, Strong escapes and hits uppercuts and slaps, whipping Cole to the corner he runs into a double boot, whip by Cole allows Roddy to hit a running dropkick, knocking Cole out of the ring, on the apron, Roddy hits a flying forearm and hits further forearms on the floor before rolling Cole back in, Cole takes momentary advantage, hitting a superkick straight into the ad break, back from the break and the two men are trading kicks, Cole whips Strong to the corner and hits a floored axe handle before going into what seems to be about ten minutes of headlocks, Strong escapes with a pendulum backbreaker straight into a boo-yay sequence, Strong hits chops, slamming Cole's head off the turnbuckle, a leaping lariat, corner strikes and a twisting backbreaker get a 2 count for Roddy, standing switches from the two men lead for an enziguri from Adam Cole for a 2, Cole goes to hit a suplex but Strong escapes, hits a boot and a step-up enziguri, goes for a backbreaker but Cole knees his way out, a kick, a superkick and  a Last Shot twisting brainbuster into a Neckbreaker for a very close 2, Strong comes back with a huge leaping knee before planting Cole up top, the two of them trade strikes for control before Strong hits a brutal avalanche backbreaker, before he can crawl to get the pin, up turn O'Reilly and Fish to fuck up the match and give Strong a DQ victory. The opening and closing stretches of this match were very much up to standard for Strong's current run in NXT with some smooth, clean and well-sold action. Sadly the middle section, where Cole could really show off was just headlocks and shtick. The ending itself, continues the run of trying to present The Undisputed Era as a threat while never letting matches end without a DQ. The problem is this doesn't feel like an organically evolving story but one being put in place to precipitate the War Games match with especially the haphazard team of Authors of Pain & Roderick Strong seemingly thrown in just to make it a triple threat like some of the War Games matches of old, even when quite clearly the booking of early in this feud could have leant into British Strong Style being put in as the third team far more naturally. Overall, I'm sure the match will be fine but for a feud that has been the main event of NXT for what feels like half a year, it's going to have to do a lot to make all this build up seem worth it.

AoP turn up before the Undisputed Era can jump Roddy, as do SaNItY, after a staredown, everything goes fucking wild as everyone trades punches, Dain and an Author slide out of the ring, Eric Young throws O'Reilly and Fish out of the ring and Fish pulls him out, Wolfe does a crazy dive out onto Fish as the other Author follows, Cole and Strong fight in the ring to the corner and Strong hits an outside superplex onto everybody leaving a pile of sweaty men on the floor to close out the show.

Nothing on the YouTubes this week so instead, here's this...

I'm all in for Otis Dosevic becoming his generation's Scotty 2 Hotty, I'm also here for Velveteen Dream and Roderick Strong continuing his quest to have a match that is 100% backbreaker. The highlight of this week's episode was of course, Kassius Ohno's classic Cesaro shirt. That's about it for this week.