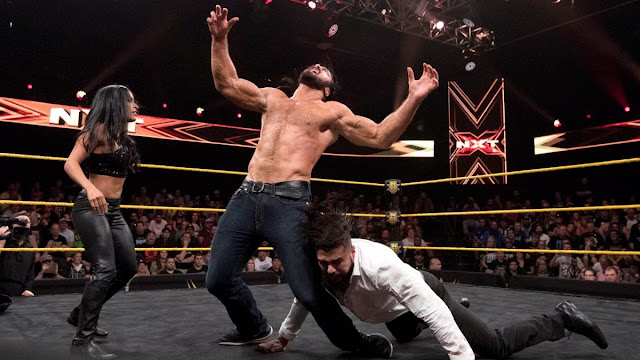 On 16th November 2017, WWE aired its 274th episode of NXT, taped at Full Sail University in Winter Park, Florida on 4th October. Our main event match was a SHIMMER redux as Ember Moon (Athena) took on Mercedes Martinez. The show also featured Lars Sullivan taking on Raul Mendoza and The Street Profits facing off against the team of Riddick Moss & Tino Sabbatelli as well as Drew McIntyre meeting Andrade Almas téte á téte before their title match at NXT TakeOver: WarGames. But was it any good? 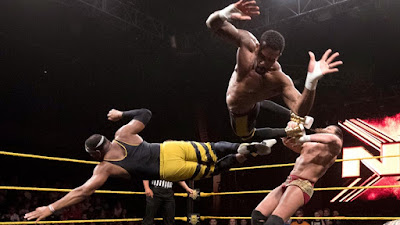 Dawkins and Sabatelli to start, they lock up and Sabbatelli powers Dawkins to the corner, separating, Dawkins is straight on him with a waistlock takedown, Sabbatelli escapes witha back elbow, they run the ropes, Ford hit a blind tag as Dawkins takes down Sabbatelli and the two hit a frog splash-elbow drop combo and a double dropkick on Moss, Ford hits a flying forearm in the corner, goes for a second but Sabatelli levels him with a reversal, tag to Moss who works over Ford with strikes and a back suplex, tag to Sabatelli who literally just punches him, for about two minutes, goes for a suplex but Ford flips out and gets that hot, hot tag to Dawkins who runs through both men with strikes and a big ol' bulldog to Moss and a 360 lariat in the corner before hitting a Punch...thing on Sabatelli for the pin. Good points, Street Profits continue to improve, showing great cohesion as a tag team, Moss for his part, plays a solid heel. Sadly, the Sabbatelli experiment continues to yield little in the way of positive results, he can throw a decent punch, that's about it. Still, not the worst. 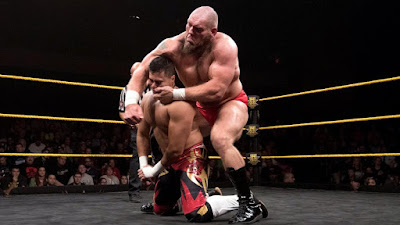 Quick squash m8. Off the bell, Sullivan goes for a tackle but Mendoza does a limbo dodge, goes for quick kicks and strikes on Sullivan who decides selling is for smaller men and whips Mendoza to the corner, Mendoza flips the turnbuckle to the apron, dodges another strike from Sullivan and hits a quick step-up kick, goes for a springboard but Sullivan headbutts him out of the air, throwing him to the corner, he hits two stinger splashes and a big delayed powerslam, Sullivan goes at him with crossface strikes before laying out the little lad with the Freak Accident waist-lift side slam for the pin. A quick match that set the scene for the encounter with Ohno on Saturday but it gave Mendoza enough offence to make him seem like someone more important than just another body for Sullivan to consume. All-round good stuff

Post-match, Sullivan would as always go for a murder till Kassius Ohno hits the ring to stop him, tossing Mendoza aside like a ragdoll, Sullivan would stare down with Ohno till he started laughing in his face and walked away.

WIlliam Regal is backstage, probably regaling the cameraman with stories of the time he had sex with Eartha Kitt in an aeroplane bathroom when in comes Johnny Gargano, Regal said he wanted to see him because he knows he's been having a tough time and he has an opportunity for Gargano, Pete Dunne has issued an open challenge for the UK title for the NXT after TakeOver, Jack Gallagher's a baddie now and Regal can't find any UK people Pete Dunne hasn't beaten recently so he's offering the match to Gargano. He accepts, obviously. 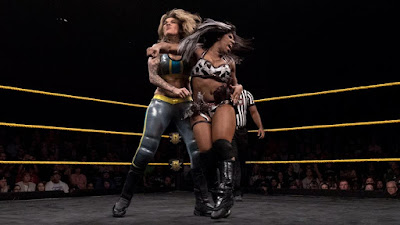 This is a big rematch for anyone who enjoyed their SHIMMER rivalry over Volumes 43-45. Collar-and-elbow tie-up to start, waistlock by Martinez transitions into a headlock, Moon tries to escape but Martinez pulls her back in by her hair into the headlock, whip to the ropes and a shoulder tackle allows Martinez to transition to a grounded side headlock, taunting slaps by Martinez and a whip to the ropes, Martinez tries to catch her in an arm drag but Moon hits an arm drag of her own and a dropkick before sweeping the leg and hitting a basement dropkick for a 2,corner clotheslines follow with Martinez reversing with an elbow as Moon runs into a spinebuster for a 2 to send us off to the break, back from the break and Moon goes straight in with a roll-up for a 2 and works over Mercedes with quick kicks till Mercedes hits a big chop and goes for a modified three amigos finishing on a delayed vertical suplex for a two, goes for a Fisherman's Buster but Moon elbows out and hits a step-up enziguri, a rana knocks Martinez out of the ring allowing Moon to hit a lovely tope suicido onto the ramp, rolling Martinez back in, she goes up top for an eclipse but Martinez hits a boot and a running tower of london for a 2, she goes for another pin but still a 2,goes for the Fisherman's Buster but Moon rolls her up for a 2, catching her breath on the ropes, Moon traps her between the top and middle, catching her back with a roundhouse and hitting a rope-hung elevated chest stomp, setting her up perfectly for the eclipse and the inevitable defeat of Mercedes follows.  Really lovely stuff here. It took a while to get going with the crowd nonreactive to the more technical grappling start but once the strikes began flying, the audience started to get into it. Moon looks impressive in victory here but also took a lot from Martinez, opening up storytelling possibilities for Saturday should they need a reason to make the odds look greater for Moon. Hopefully, Martinez will be back soon on a more permanent basis.

Next Week: The Post-TakeOver NXT will feature Pete Dunne vs. Johnny Gargano for the UK Title & Ruby Riot vs. Sonia Deville 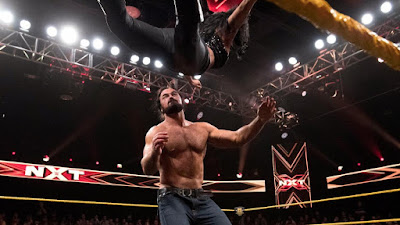 Drew is out in a t-shirt and jeans, he talks about how it's great when a plan comes together, he congratulates Almas on his plan, well, Zelina's plan working as he's got his title shot but he's in trouble because now he's got the opportunity he'll see how reality sets in and he will find out what kind of man he is. Drew has made it clear what kind of man he is but when the big lights of Houston are on Almas, will he be able to say the same? He says that Vega has many things to say about climbing the mountain of success but when Almas steps in the ring, he'll discover that Drew is the bloody mountain. He asks one more time for Almas to come out and face him like a man, to prove to himself he is one, unless Vega isn't letting him off the leash tonight. Out come Vega and Almas with Almas looking sharp as hell in a suit, as he hits the ring at speed, he takes off his blazer and Drew takes off his t-shirt because yeah, why not, they trade strikes with big Drew getting the best of the encounter, Vega goes for a crossbody but Drew catches her, putting her back on the floor as Almas hits a chopblock, some nasty headpunches and the El Idolo hammerlock DDT to stand tall. If we allow for the over-use of stereotypical 'be a man' sentiment by McIntyre, this was a strong segment to head off into TakeOver, not only does Drew continue to sound confident, assertive and like a true champ on the microphone but Almas looks like even more of a threat than normal making Drew bump like a pro off the El Idolo. If they can bring the same fire to their match as they did here, this could be something special.

Another week without any YouTube exclusives so here's the Moon v Martinez trilogy from SHIMMER.

Another good-to-very good week for the yellow ropes as the show delivered on practically all fronts. The opening tag match was pretty standard stuff but the rest of the show recovered well. There was perhaps a tad too much padding and promo packages and not enough actual content but the content was high enough quality for the most part that I didn't mind. See you on Saturday, everyone.